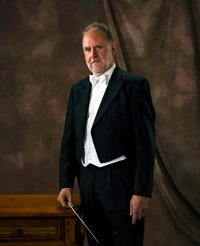 The Sibelius Second has historical meaning for SSV. A performance of this work under Yasuo Shinozaki was the highlight of the orchestra’s precarious and minimally preplanned debut season in 2003. It was a brilliantly cogent, overwhelmingly urgent rendition. Could the orchestra, now more seasoned and as securely placed as a smaller orchestra can get these days, repeat that triumph?

And, if so, was William Boughton the guest conductor to do it? Often excellent in smaller and lighter repertoire, Boughton had led an awkward and sloppy Sibelius Fifth here several years ago.

Saturday’s result sounded not at all like my memory of Shinozaki’s version. What a relief it was, though, that this performance was nevertheless exciting, moving, and successful on its own terms. Instead of accumulating the work’s power in sheer, inexorable logic, Boughton constructed it out of pieces and let its force and meaning sneak up on the listeners. He conducted it in a state of near-constant minor tempo change. This was nowhere near so prominent in the other works on the program, so it was definitely an artistic choice. It led to some odd and irregular phrasings, and to juxtapositions that, if they didn’t make sense at the time, would always click retroactively after something else had happened. This effect was strongest in the dark and mysterious slow movement, which began by running off in various directions successively. Soon, though, the music began to cohere, and the entire more emphatic second half of the movement was riveting.

This performance was exciting, moving, and successful on its own terms.

Sibelius’ finale is an odd duck. Its characteristic cohesion of themes out of fragments makes it seem as if it’s always just about to get going, and its repeated emphatic cadences simultaneously make it seem as if it’s always just about to end. The critic Virgil Thomson infamously called this symphony “vulgar, self-indulgent, and provincial beyond all description,” and I suspect that this clash is what Thomson hated most about it. That mixture of never quite starting and never stopping (until it finally does stop) was vividly on display in this performance. Yet the orchestra was so winning in its sincerity and commitment that it would take a curmudgeon like Thomson to object. There won’t be any objection from me. If this is vulgar provincialism, long may that wave.

Wonderful Sound in the Showpieces

Nor was there anything to complain about in the musicianship. This concert displayed SSV at its finest. Outright flubs were few. The sheer sound was wonderful throughout both orchestral showpieces, the Sibelius and Edvard Grieg’s Peer Gynt Suite No. 1, the one that begins with the familiar “Morning Mood” and ends with the even better-known “In the Hall of the Mountain King.” SSV played this suite simply for instrumental color; it needed no other excuse. The violins were light and shimmery; the cellos, often exposed in both Grieg and Sibelius, were at their absolute strongest. Assistant Principal Adelle-Akiko Kearns, the cello section leader at this concert, gave her lyrical solos with fine dedication.

The young Chinese pianist Ning An made a cool-minded soloist, playing with a clean and ringing staccato touch.

Although I could not see the winds very well from my seat near the front of the hall, I could certainly hear them: fine, piquant sounds all around, sometimes a bit sour, cleanly separated from the strings. The horns, too, were rich, while the brass roamed freely in Sibelius’ surprisingly brassy symphony. One of the trombonists was on stage practicing his Sibelius (the final work on the program), before the concert began, and this commitment paid off.

One other work, not quite so Nordic, completed the program: Sergei Rachmaninov’s Rhapsody on a Theme of Paganini, his last and best-loved piano concerto. The young Chinese pianist Ning An made a cool-minded soloist, playing with a clean and ringing staccato touch, with judicious use of the pedal, allowing the piano to sing without smearing. He was light and relaxed throughout, pealing merrily in his loud chords and giving a calm and gentle tone to the emotional 18th variation.

Boughton’s job throughout the concerto was to make a coherent flow out of the jumpy succession of contrasting variations. He succeeded with both the freshness with which he had the orchestra jump in for the crisper 19th variation (at precisely the right tempo, after the softer 18th) and the humor and careful coordination with which conductor and pianist together presented the work’s succinct final notes.

As a special indulgence for the final concert of the season, orchestra as well as soloist favored the audience with encores. Ning An played Rachmaninov’s jangly, somewhat Tchaikovskian Prelude in G-sharp Minor, Op. 32, No. 12; and Boughton and the orchestra rounded out the program with Tahiti Trot, Shostakovich’s witty and show-off 3-minute (how long it takes to play) 45-minute (how long it took him to write it) arrangement of Vincent Youmans’ Tea for Two.