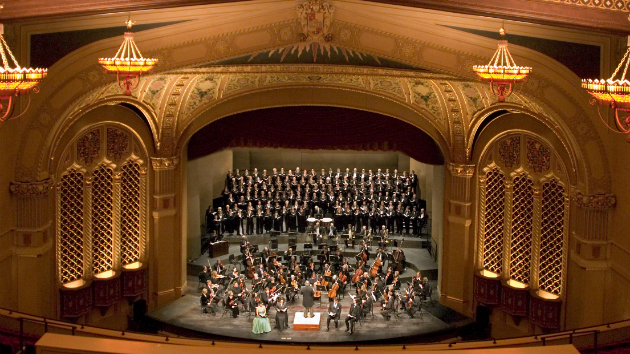 Symphony Silicon Valley gave its audience at San Jose’s California Theatre a special treat on Saturday by performing a rarely heard masterpiece by a famous composer. It was Sergei Rachmaninoff's choral symphony The Bells, Op. 35, which is set to a loose adaptation of the Edgar Allan Poe poem by Russian poet and translator Konstantin Balmont.

Though the symphony has two slow movements out of four, this is not the lushly melodic, deeply Romantic Rachmaninoff of his popular image. The Bells is a dark, restless, dramatic work akin to his Symphonic Dances or Symphony No. 1. It’s full of epic surges, brass cries, and rhythmic tattoos. Guest conductor Gregory Vajda took the music expansively. The mood was just a bit calmer than it might have been, and the composition didn’t burst a metaphorical blood vessel.

The chorus consisted of the Symphony Silicon Valley Chorale, directed by Elena Sharkova, with the San Jose State University Choraliers, directed by Jeffrey Benson. The chorus needed all the lungpower it could get, with added force from all those crunchy Russian consonants, to ride above the orchestra. Success was most impressive in the turbulent third movement, depicting brazen alarm bells. The sound of the chorus rose and fell in surging waves over more evenly paced work from the orchestra.

SSV took advantage of the chorus by also bringing the women of the Chorale on stage in Debussy’s Nocturnes. They sang wordlessly as the titular temptresses in “Sirènes,” a movement often omitted in performance for lack of an available chorus. Balance again was good as the chorus imitated the orchestra in successive passages.

Vajda gave the Nocturnes the same calm expansiveness that he brought to Rachmaninoff. It was a confident, straight-ahead approach with a strong American accent, even in the wispy “Nuages.” The orchestra whipped up a fine crescendo out of a hush with the approaching processional midway through “Fêtes.” Though not all the notes were perfect, there was much fine playing here, particularly from Patricia Emerson Mitchell’s English horn, prominent in both Debussy and Rachmaninoff.

The concert was planned to include even more of a special treat, the first performance of a new choral-orchestral work by local composer Pablo Furman. Unfortunately, that proved to be too much to chew. With The Bells, also unfamiliar to most of the performers – even Sharkova, a Russian native, had never heard it live before — on the program, it turned out to be just more new music than could be adequately rehearsed in the available time. So a collective decision was made after the first full rehearsal to withdraw Furman’s piece. That’s a pity, as he is a talented composer, and his work – also focused on bells – would have made a great pairing for the Rachmaninoff. SSV President Andrew Bales promises we’ll hear it some day.

In its place on the program, we heard Tchaikovsky’s Romeo and Juliet Overture, a well-loved piece that any decent orchestra can play well with minimal rehearsal. This performance particularly shone in clean and bright string sound in the love theme. As with the other works, the performance was appealing while remaining emotionally even-tempered.