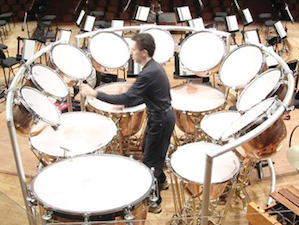 Symphony Silicon Valley’s guest artist for Saturday’s concert at the California Theatre in San Jose was David Herbert, the timpanist whom the San Francisco Symphony let get away. He plays his regular gigs for the Chicago Symphony now.

Before he left San Francisco, though, the orchestra there commissioned a timpani concerto for him. An extensively revised version of this work, The Grand Encounter, by William Kraft, a composer who was once the timpanist for the Los Angeles Philharmonic, was the featured work on the program, conducted by Paul Polivnick. Although the concerto is not a long work, at about 25 minutes, it packs in a great deal in its four movements.

Its ingredients include no fewer than 15 kettledrums: six regular-sized ones, arranged in a semicircle around the soloist, and nine smaller ones hung from a frame above the other six. The soloist looks like he’s playing inside a cage. This unusual setup attracted a fair amount of smartphone photography from orchestra members as they assembled on the stage before the concert.

Almost as prominent as the timpani was the huge battery of percussion instruments, requiring four players, at the back of the stage. This emphasized gongs, rattles, and a marimba that did not compete with the timpani in tone quality. The setup included another large frame hung with a vast number of nipple gongs, more seen than heard during the concerto.

What was heard more than seen was a hanging gong that three percussionists gathered around in the last movement, each wielding a violin bow in both hands, and applying them to the edge of the gong to produce a weird, shimmery, overtone-laden sound that contrasted nicely with the timpani.

The rest of the orchestra also got a say, most strikingly in the slow movement. This began with string passages that included notes sliding in pitch, a practice then imitated by the timpani. Anyone who didn’t know that a kettledrum can play glissando learned it here. Herbert played rolls while adjusting the tension on the drumhead, and hence the pitch, with a foot pedal.

This was a thoroughly integrated work … proving Kraft’s theses that percussion, including timpani, can be beautiful and that they can be used dramatically.

The concerto began with timpani and orchestra delivering heavy rhythmic thumps in union, sounding much like the primitivism of early Prokofiev. The most astonishing, and musically challenging, moment came in the last movement, when the timpani and orchestra pushed out steady beats at different speeds.

In general, this was a thoroughly integrated work, with soloist and orchestra striving together, proving Kraft’s theses that percussion, including timpani, can be beautiful and that they can be used dramatically in the same way as other instruments. This is a solid, thoughtful modernist composition, and wherever the necessary 15 timpani may be found, it deserves to be heard.

Instead of something light and fun, this deep and heavy concerto was paired with another deep and heavy work, Shostakovich’s Symphony No. 10, the highly personal and (as always with Shostakovich) cryptic symphony that he released following the death of Stalin. Like Glinka’s Ruslan and Ludmilla Overture at the previous concert, this work was a special favorite of Leonid Grin, the last music director of the old San José Symphony.

Hearing an orchestra work together like this is the joy of attending a symphony concert. At its best, Symphony Silicon Valley does this gratifyingly well.

That that orchestra was the immediate ancestor of Symphony Silicon Valley didn’t mean the performances had to be alike. Where Grin would evoke tragedy, Polivnick was introspective. This was particularly the case in the long first movement, whose tempo marking of Moderato was given a broad, relaxed interpretation. Long solos for various instruments in turn, usually with sparse accompaniment, curled around themselves, facing inward.

The spine of the movement, in this performance, was the cello section. With the basses, the cellos begin the symphony, and, whenever they were playing (which was most of the time), they were conspicuously audible. For this kind of prominence, the cello section needs to be skilled and secure, and this evening it showed that. The tone quality was rough-edged rather than smooth, yet it was as lyrical as necessary.

Still, the fast sections of the symphony seemed even more dazzling, particularly the second movement scherzo. Here the entire orchestra gathered itself and was consistently on point, pulsating with energy and making Shostakovich’s grim allegros tick along as they should, in splendid coordination. Hearing an orchestra work together like this is the joy of attending a symphony concert. At its best, Symphony Silicon Valley does this gratifyingly well.