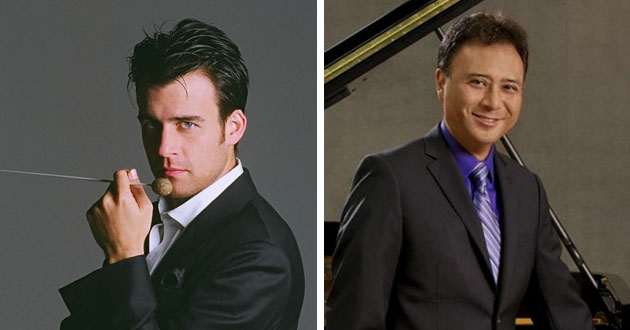 Symphony Silicon Valley on Friday returned to its favorite period, the 1920s, the decade of origin of its colorful and distinctive venue, the California Theatre in San Jose. This time, the guests were those two urban and urbane composers, George Gershwin of New York and Maurice Ravel of Paris.

Along with them came pianist Jon Nakamatsu, so much a local favorite that this program was scheduled for three performances instead of the usual two — all of them nearly sold out. Friday’s was first, followed by Saturday evening and a Sunday matinee.

Nakamatsu played in both of Gershwin’s most iconic piano concertos, the Rhapsody in Blue and the Concerto in F. And the orchestra added Ravel’s two most louche and decadent tone poems, Boléro and La Valse.

The big question for all these works — even Boléro, despite its strict rhythm — was, how well would the orchestra swing? Would the players capture the spirit and energy of these works and not just their notes?

Under guest conductor Ward Stare — music director of the Rochester Philharmonic Orchestra and veteran of such compatible repertoire as Die Fledermaus and HK Gruber’s cabaret cycle Frankenstein!! — they did just fine.Nakamatsu is a gentle, expressive performer. … He played Gershwin with the same melodic grace he brings to Chopin.

In fact, the orchestra was more the star of this concert than was the pianist. Nakamatsu is a gentle, expressive performer, and not a key-pounder, even in passages where he rather ought to be. The focus of his work came where he was unaccompanied, where the audience could enjoy the subtle variations of pressure he used to give character and an individual touch to the music. He played Gershwin with the same melodic grace he brings to Chopin.

Otherwise, even when piano and orchestra played together, I was watching the orchestra, which almost never sounded like it needed a push to get into the spirit of the music. All of Gershwin’s rhythms got up and danced.

I was especially impressed with La Valse for its smoothness and elegance. It felt much more like a real Viennese Waltz than a distorted echo. Even the disintegrated ending was restrained and controlled.

Something similar could be said of Boléro. Rather than wild, it was cool and seductive. It, too, is written with a disintegrative ending, which, on Friday night, didn’t disintegrate.

The Gershwin works were more dynamic. They lived on their exotic orchestrations — especially the Concerto in F, which Gershwin orchestrated himself. Feeling himself a tyro in the field, he hired composer Ferde Grofé (who went by the first name Ferdie during the ‘20s) to orchestrate the Rhapsody. The first movement of the Concerto in particular was, in this performance, popping energetically with exciting brass and percussion.

Of the many, many fine solos that permeated all these works, two players particularly stood out. Michael Corner, principal clarinet, of course got to begin Rhapsody in Blue with a famous solo. To this, he applied the swing and flexibility essential to the music, and also an appropriate amount of decoration and tonal expression to give it personality. He did the same thing with his solo in Boléro, just more restrained, as suits the more rigid character of the music. If there was a star player in this concert, it was he.

James Dooley on trumpet also got a lot of solo attention, particularly in the slow movement of the Concerto in F, where he had to play in a smooth jazz style, not an accomplishment often asked for in classical compositions. Though not as technically accomplished as Corner, he made some wonderful sounds. So did his colleagues in the brass section, who astonished the audience with some of the timbres they could emit with the help of mutes.

Listening to Boléro, I remembered the occasion when Leonid Grin, music director of the old San Jose Symphony, declared that it was actually a snare drum concerto and, in an awkward attempt at whimsicality, put the player in front of the orchestra. Nothing like that happened this time. The percussion stayed in the back, making the work pulse without obtruding itself. So did all the unified strumming from strings at the beginning.

This concert made the 1920s a great place to visit.