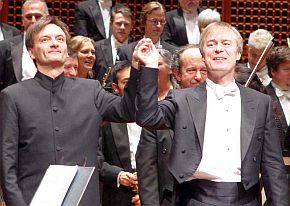 Conductor David Robertson returned to San Francisco last week to lead the San Francisco Symphony in performances of Tchaikovsky, Sibelius, and Scriabin. Robertson once again showed his uncanny ability to summon forth rapturous sounds from this ensemble. I first heard him conduct the SFS in a 2002 performance of Messiaen's Turangalîla Symphony, which counts as some of the most glorious — and certainly the loudest — orchestral playing I've ever heard.

Wednesday evening's results weren't nearly as spectacular, though they were often quite impressive, especially in the Scriabin. Robertson, music director of the Saint Louis Symphony, is a notably different kind of conductor than Michael Tilson Thomas and, accordingly, the orchestra sounds markedly different under him than under its music director.

Tilson Thomas frequently is intensely interested in the smallest level of detail and, under his baton, the orchestral fabric sounds purposefully layered. He seemingly invites listeners inside the ensemble's sound to hear multiple voices weaving independently about one another. Robertson, on the other hand, seems generally less interested in texture than in timbre. Although his San Francisco performances have lacked the level of precision characteristic of Tilson Thomas' readings, they have been notable for the huge spectrum of sounds he is able to pull out of the ensemble.

The concert opened with Tchaikovsky's Piano Concerto No. 2 in G Major, Op. 44, performed by Stephen Hough. This concerto is a strange piece. The first movement, Allegro brilliante — which, at nearly 20 minutes, is as long as the second and third movements combined — is full of stops and starts, vacillating between boisterous marchlike passages, sighing and introspective music redolent of the composer's Eugene Onegin, and thundering passages for the soloist.

The slow second movement, in contrast, prominently features extended duets for solo violin and cello (and not always piano, the ostensible soloist), while the third movement is a jubilant, if rather simplistic, dance for soloist and orchestra. Given its formal disjuncture and its multitude of seemingly dead-end themes, this piece, particularly the first movement, can be difficult to listen to. Soloist Hough, though, did a remarkable job of winning his listeners' attention.

Whatever the piece's compositional weaknesses, it demands a staggering level of virtuosity from its soloist, and Hough readily met the concerto's formidable challenges. His brilliance, though, wasn't consistently met by the orchestra, which, under Robertson's baton, many times sounded sluggish.

Glorious Sounds EvokedThe second half began with Sibelius' 1892 tone poem En Saga (A fairy tale), here performed in its 1902 revised version. Robertson led a solid, if not spectacular, performance. The score is highly episodic, and at times it felt like Robertson rushed too quickly from one section to the next, not exploring in great enough detail the intricacies of each episode. However, he elicited glorious sounds from the ensemble, evidenced most directly by the recurring brass motif, which is majestic in its cold grandeur.

The symphony's low brass section sounded exceptional. The concert closed with an extraordinary performance of Scriabin's Poem of Ecstasy. Here, Robertson showed the same strengths demonstrated in his 2002 performance of Turangalîla, namely his ability, first, to produce a staggering array of colors from the orchestra and, second, to deploy and control these colors kaleidoscopically over huge formal stretches. (It is perhaps not inconsequential that both Messiaen and Scriabin — composers whom Robertson champions and in whose music he excels — were both notable synesthetes, at least conceptually if not physiologically.)

The performance of the Scriabin showed a resolve and deliberateness lacking in the Tchaikovsky and Sibelius. In less capable hands, Ecstasy can easily seem long-winded and overblown, to the point of farce. Robertson kept the piece's nonstop harmonic tension and sense of searching development consistently high, and his performance was edge-of-the-seat thrilling from beginning to end. Ecstasy concludes with Scriabin's musical adumbrations of the beyond, during which Robertson flooded Davies Symphony Hall with breathtaking waves of sound.