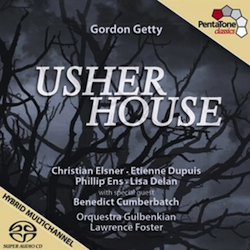 I know of no other opera with an apocalyptic scene taking place on All-Hallows’ Eve. So this must be the right time to be reviewing Gordon Getty’s operatic setting of a short story by Edgar Allan Poe.

And a good time for you to sit down, dim the lights, and enjoy our composer’s effectively spooky portrait of a beleaguered aristocrat and his sickly sister in a doomed mansion in the South.

The Fall of the House of Usher was Poe’s most famous piece of prose. But even the biggest fans of that early American master of Gothic storytelling shouldn’t be put off by Getty’s canny twisting of the tale.

He’s made Poe himself the participant narrator, framing the single-act story with the author’s mood-setting Prologue and somber Postlogue, in a manner evocative of Captain Vere’s role at the beginning and end of Benjamin Britten’s opera Billy Budd.

In addition, Getty, who wrote the libretto and the foreword to the PentaTone recording’s liner notes, has added elements to the devolution of the ancient curse on the Usher family, and has chosen to put the Ushser Ancestors into the production (as either silent performers or projections).

The cast enlivens Getty’s primarily discursive score, with Poe delivering the single closest thing to a set-piece aria — the harmonically chimerical “Where is my lady” (recorded separately by Delan on a PentaTone compilation of contemporary American composers). Another compositional standout is the extended orchestral writing that accompanies the entrance in Scene 2 of the Ancestors to the ballroom (announced in a nonsinging guest appearance by rising British film star Benedict Cumberbatch, as the Attendant), and the dancing that follows. Getty grows more lyrical in this scene, with a smartly sardonic aside to Johann Strauss, and an occasional macabre stagger to the dance rhythm.

Another compositional standout is the extended orchestral writing that accompanies the entrance in Scene 2 of the Ancestors to the ballroom.

The gestural aspect of much of the vocal score involves many repeated figures and octave leaps, well-paced and artfully accompanied by the Orquestra Gulbenkian under the direction of Lawrence Foster (in Lisbon). After the Prologue, the theatrical tone becomes deceptively collegial and upbeat, with Roderick welcoming a visit from his one-time school chum, “Eddie” Poe. (Elsner and Dupuis are wonderfully vital and emotionally convincing in portraying this interaction between the young men.)

The transition to Roderick’s revelation of his family’s bleak history is a bit jarring and complex, but nonetheless entertaining, with Ens presenting a creepily engaging Primus. Getty colors the noir settings of the story and its location with effective deployment of horns and woodwinds, and interposes a celesta to represent the apparition of Madeline, whose vocables Delan imparts in a ghastly but lovely and lucid manner.