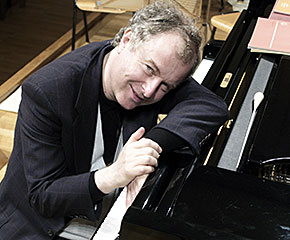 András Schiff probably knows J.S. Bach’s keyboard music as fully as any pianist alive, having devoted so much of his career to recording and performing it. In his traversal of Book II of the Well-Tempered Clavier on Sunday at Davies Symphony Hall, the second of his four Bach recitals there this season, he delivered a performance that was both commanding and searching. His playing revealed the depth of his connection to this music and brought a sense of discovery to it, as well.

From the outset, scarcely pausing between movements, Schiff’s playing offered the broadest possible range of colors and a complexity of musical character. One noteworthy element of his approach is the decision to forego pedaling completely in this work, the case for which he made in a convincing program essay. By dispensing with this single expressive device, his playing revealed so many more tools at his disposal that it hardly seemed that the music could be approached otherwise.

First, Schiff’s sound is a marvel, not only because of the warmth he can bring to the piano but also because of the sheer variety of tone he can produce. The rich tone that filled the opening C-major prelude and fugue suggested an orchestral fullness, but then there was the organlike warmth for the thick textures in the E-minor fugue, or the bright tone that animated the F-major prelude and fugue.

A special characteristic that Schiff brings to this music is an extraordinary range of articulation, so that he could set contrapuntal voices apart, with one in a singing legato and another line played just slightly more detached, or could pose the voices further apart with greater differences in attack.

His playing revealed the depth of his connection to this music and brought a sense of discovery to it.

This same approach allowed individual lines to evolve as they were repeated, moving from legato to detached or vice versa, and giving a prismatic view of a single musical idea. Even brief, ornamental figures were imbued with multiple meanings — a trill might serve as a brief flourish, or a spark for a new phrase, or a decisive turning point in the music.

Schiff’s command of the music played out in innumerable ways. In huge movements such as the F-sharp-minor or B-flat-minor fugues, each filled with an interwoven network of contrapuntal ideas, the pianist played with a sense of unfolding exploration even as each line proceeded with a quality of gravitas. The balance in Schiff’s playing is so refined that he can weave Bach’s counterpoint such that each line emerges in utter clarity, even as a complex sense of the work’s total architecture is summoned forth.

Schiff’s command of the music played out in innumerable ways.

Part of the continuity the pianist brings to the work, the sense of its encompassing a large musical arc within which a vast variety of expression is possible, comes from his unerring sense of pulse. Finely chosen rhythmic subtleties emerged throughout the work, a gentle push and pull within phrases, or a slight slowing to highlight the occasional ambiguity between major and minor, while a deeper pulse could still be perceived.

Schiff brought a quality of denouement to both halves of the program, with a lovely feeling of breath infused into the F-minor prelude and fugue that closed the first half and the B-minor pairing that ends the full work. Schiff encored with the C-major prelude and fugue from Book I, suggesting the complete work as an unending, ever-rewarding cycle to return to, all while revealing just a little more of the infinite rewards that this artist can bring forth from this music.