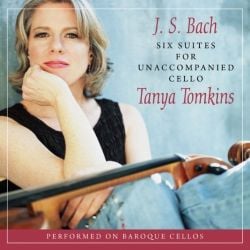 Solo Bach, to be trite, is to string players as a flame is to a moth: irresistible, yet posing a considerable risk of getting burnt alive. No serious violinist or cellist goes without the Sonatas and Partitas or the Suites, respectively. (Violists, lucky dogs that we are, have access to both, though those of us who don’t want to wrench our left hands out of joint tend to stick to the Suites. So do bassists — the Suites need some arranging to be playable on a double bass, but there are multiple editions.) Performing such exacting music in public, though, is a risk, and setting it to disc a bigger one. That people persist in doing it, in the face of what by now is an overwhelming recorded legacy, is testimony to both the allure of the music and the sheer pluck of musicians who know that, despite all that’s been said already, they have something to add.

Tanya Tomkins has got something to add to the Bach Cello Suites. Her new recording of the cycle, on the Avie label, is expressive in an undemonstrative way that owes surprisingly little to a cellist’s usual rhetorical stock in trade. There’s not much of dramatic, swashbuckling bow-strokes, or huge dynamic range, or even much variation in vibrato (which she uses rarely, and then subtly). And still there’s a wealth of musical wisdom here.

Tomkins takes her time. This is predominately gentle, ruminative Bach, with a concept of musical time that doesn’t stress the exigencies of dance meters as much as some other Baroque instrumentalists might. It reminded me, indeed, of Monica Huggett’s recording of the Sonatas and Partitas, which I haven’t heard for many years, but recall as having the same leisurely air and moment-to-moment flexibility as this. Given that Tomkins and Huggett are the cellist and violinist, respectively, of the Benvenue Fortepiano Trio, that may not be coincidental.

The BBC comedy Yes, Prime Minister introduced the concept of the “Politician’s Syllogism,” which runs: “(1) We must do something; (2) this is ‘something’; (3) therefore, we must do it.” There's an analogous affliction, common in players of Baroque music, that some of us have taken to calling "Stupid Ornament Disease": We must embellish; this is an embellishment; therefore, I must play it.

Violinists don’t run amok with home-brewed ornamentation in solo Bach, mostly because Bach himself hasn’t left much room: Between the constant multiple-stopping and the elaborate figuration, your mind and your fingers are busy enough. Cellists have much more leisure in the Suites, and sometimes the results aren’t pretty. I’ve heard enough pointless twiddles from people who feel they’re positively obliged to ornament (whether they know how or not) to feel a little anxiety at every new recording.

Tomkins, praise be, has good embellishment instincts. I’m not overenamored of her taking the last phrase of some of the trios of the galanteries (those are the “light” dances right before the last movement of each Suite) in pizzicato, but I can live with it. It matters much more to me that she’s left the Sarabande of the Fifth Suite — the starkest thing in the entire set, and thus the juiciest target for the compulsive embellishers — practically alone, with only a flourish at the first repeat and the merest touch at the very end. That’s a fine performance, at once bleak and eloquent.

And in the Sixth Suite she’s done something brilliant. Commissioned ornaments are nothing new (they’re practically as old as printed music), but what Tomkins plays in the Sarabande of the Sixth Suite isn’t ornamentation but a full variation, a double, written by the third Benvenue Trio member, pianist/composer Eric Zivian. It’s like the doubles in the B-minor violin Partita: an elaboration of the same harmonies, but in shorter note-values, with more rhythmic and even harmonic complexity.

There are a few things on these discs that I don’t much care for. The Prelude of the Fourth Suite surely shouldn’t be as jaunty and clipped in articulation as this, for one. (I think the idea must have been to allow room for expressive broadening and legato at key points, but the movement as a whole just feels wrong.) As a contribution to the recorded legacy of the Suites, though, this is the most compelling I’ve heard in some time.