Minimalist procedures from the 1960s and '70s ruled the roost. Continuous slight variations of established patterns over relatively long periods of time characterized the works of three of the four featured composers. The exception was a set of short, tonal pieces by Elena Kats-Chernin, in which sequences of chord progressions reminded the concert’s listeners that repetition is the mother of minimalism. The audience, which applauded her music most enthusiastically, must also have been reminded that there’s nothing wrong, however old-fashioned, with a good tune.

The concert opened with two works by Makan, Resonance Alloy and Static Rising. Both pieces exploited the innovative placement of a cymbal. Resonance had the cymbal hanging behind a tam-tam. Raising or lowering the cymbal caused minute variations in sound. It was interesting for five minutes, but at 30 minutes, only sleep provided salvation from this gong show.
Noise Revisited
Static had the cymbal upside down on top of a snare drum. By bowing its edge or using sticks to strike or drag on it, percussionist David Shively caused a more obvious variety of sound than the previous contrivance. The Del Sol String Quartet was there to accompany, and its scrapes and shrieking glissandos made sure that sleep was not possible. Like composers in the experimental branches of 1960s modernism, Makan was venturing into, as he put it, “the nebulous and fertile territory between pitch and noise.”

Static began with distant-sounding dive bombs and moved on through several sections, one of which brought to me an image of someone desperately banging on a screen door to stop dozens of mewing cats from fighting inside. You can hear it for yourself at the composer's Web site. Eventually, more cheerful, hillbilly-jam sounds in the strings give way to concluding quasi-tonal utterances. 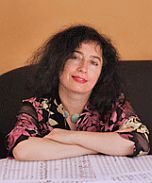 I have never felt a more wrenching contrast at a concert than when Static was followed by Kats-Chernin’s Russian Rag. Having been sentenced to 18 minutes of “fertile territory,” my being reeled as it had to snap back into the conventions of 1905, minor-key, salon music in the postmodern tradition of William Bolcom’s Graceful Ghost. Kats-Chernin, on piano, joined the Del Sol in the rag and in the following Fast Blue Village, a furious and exciting number loaded with the chord sequences mentioned earlier, and more dominant-tonic harmonic relationships than you could shake a stick at.

Alone, Kats-Chernin ended her set with Eliza Aria, another minor-key divertissement reminiscent of Michael Nyman’s semiminimalist music for the film The Piano. Like Nyman, Kats-Chernin has achieved popular fame. Originally part of a ballet, Aria was picked up for use as a Lloyds of London commercial, and now, according to the composer, it has achieved a “surreal notoriety.” “All the lads in England are singing it.” 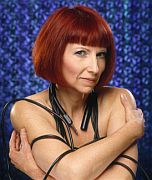 After intermission came Dan Becker’s piece for prepared Disklavier, Revolution. The Disklavier, as you may know, is the modern-day player piano, in which a computer does the playing rather than a punched roll. For Revolution, Becker had the good judgment to add a human performer, as well, allowing for interplay between the unseen electronic commands and the more visibly purposeful actions of pianist Kathleen Supové.

The title of the piece refers to a speech of Martin Luther King’s, broadcast through speakers during the course of the performance, in which he remarks that the most striking thing about Rip Van Winkle is not that he slept 20 years, but that he slept through the American Revolution. For Becker, time is portrayed by an incessant, Disklavier-run, tick-tocking of two upper-register black keys, “prepared” with objects placed between the piano strings inside. Snoring, among many other gestures, is mimicked by the pianist with low notes, and the revolution consists of a sudden ramp-up to a faster tempo for a section. At the end, the pianist plays the tick-tocking herself, then stops.
Wake-up Call
The final work on the program was Morton Subotnick’s The Other Piano, for piano (Supové) and supervised electronics (the “other” piano, played by Subotnick). Since I was thinking of the story of Rip Van Winkle, I couldn’t help but remember Subotnick’s response to another preconcert question.
Amirkhanian: "Are you doing something new for you [in this piece]?"

Subotnick: "It has a melody."
For all his 40 years of fame as a pioneer in electronic music and multimedia experimentation, it is fascinating that Subotnick has finally “woken up” to melody. As he put it, “I hadn’t discovered for myself what the message of music was.”

In the event, The Other Piano did not have a memorable tune. What it had instead was an engram, a basis for a tune, starting with three notes, a descending minor third and major second, which was elaborated in a consistently engaging manner. The computer-generated aftersounds from the piano came from speakers situated around the hall so that they could overlap and “float around the auditorium” in an “improvised space painting.” Most arresting was the third of the four movements, “Alone,” which began with trills that morphed into what sounded like a swarm of flies and, later, bees.

Despite the new music label, the Other Minds concert pivoted on an old question: How long can a piece last before it outstays its welcome? Makan’s explorations went way over the limit. Becker’s 17-minute revolution seemed, even so, about five minutes too long, and stands to gain a lot with some judicious editing. Kats-Chernin’s brevity was just right, making me anxious to hear her pieces again, old-fashioned as they were.

But for Subotnick, a master of transition and inherent interest of material, the 37-minute work that made the concert end near 11 p.m. was more than welcome. It was heavenly.