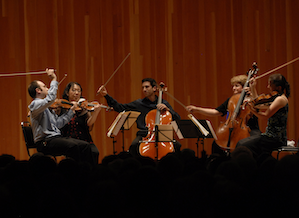 If Bay Area music lovers had to depend entirely on the region’s own ensembles and artists, they would have few complaints. The indigenous pool is wide and deep, the equal of any in the country.

It’s our double blessing, the shimmer on the lake, to have the kind of visitors from afar we so often do. Credit San Francisco Performances, Cal Performances, Stanford Live and other resourceful presenters for enriching the musical life here in such diverse and gratifying ways.

How fortunate an enthusiastic audience was to witness and acclaim the evidence. In polite chamber music terms, the out-of-towners got the equivalent of a rock-star response. “Oh yeah!” shouted one woman at the end of the Schumann, speaking, no doubt, for more than a few dazzled listeners.

In their attacks and phrasing, transparency and responsiveness,tonal variety and rhythmic command, the Marlboro men and women achieved a thrilling sense of communion.

Given the acuity, limberness and internal cohesion of the players, it’s hard to believe these performers haven’t been working and traveling together for years. In their attacks and phrasing, transparency and responsiveness, tonal variety and rhythmic command, the Marlboro men and women achieved a thrilling sense of communion. Lyricism and drama, tragedy and wit flowed together like the braided strands of current in a running stream.

Cellist Marcy Rosen and pianist Cynthia Raim were the senior figures in this assemblage. Violinists Bella Hristova and Robin Scott and violists Dmitri Murrath and Vicki Powell were the youngsters — in appearance only.

Nowhere was the linking of seasoned musician and rising star more apparent than in the gorgeous conversation Rosen and Murrath had in the first movement of the Schumann quintet. In what seemed like an exchange of warm, amber-tinted intimacies, the cello and viola sent messages of hope, regret, and consolation to each other. I can’t have been the only one on the edge of tears.

Nowhere was the linking of seasoned musician and rising star more apparent than in that gorgeous musical conversation ... I can’t have been the only one on the edge of tears.

The delights continued in kaleidoscopic fashion through this bounteous work. Tense mystery gave way first to wistful sweetness and then to fury in the contrasting sections of the hauntingly hesitant funeral march of the second movement. (Cal Performances regulars might well have summoned up the crawling choreography set to this movement by another treasured Berkeley visitor, Mark Morris, in his memorable V.) The Scherzo came off as a giddy game of Chutes and Ladders, the frictionless scale passages cascading down and up and down again. Pianist Raim led the way in a swaggering but paradoxically light-footed account of the final Allegro.

Lovely as it was to relish the cross-generational meeting of musical minds in both the Schumann and Mozart quintets, the Marlboro evening reached its most exhilarating high point in the Kodály Serenade. Hristova, Scott, and Powell performed the three-movement piece standing up, which added a sense of muscular vitality to this wondrous three-movement piece. Whether a listener bought into a Kodály biographer’s programmatic interpretation of a lover and his mistress was beside the point. The drama, folkloric romance, and urgent lyricism of the piece were intrinsic and unmistakable.

The first movement layered exultant fervor and lustrous sorrow, all of it expressed with an arresting timbre, vivid but never harsh. Powell’s ravishing viola lament in the Lento, played out against Scott’s shimmering, juddering tremolos, led to a punishing, heartbreaking exchange with Hristova, whose clear, insistent tone was a marvel all night. Guitar-like strumming and an antic, whirling dance tune fired the Hungarian-flavored Vivo.

Mozart’s late, life-affirming E-flat Major Quintet began the evening auspiciously. Right away the listener knew things were going to happen. The exposition and development in the opening seemed genuinely suspenseful, which made the recapitulation and resolution all the more satisfying. The theme for the second movement got a stately introduction, followed by the delicate embroidery and deepening introspection of the variations. The false cadences and oom-pah flourishes of the Menuetto seemed freshly conceived. So did the decisive accents and elastic rubato in the Allegro.

Happy as the audience was to be hearing all this in Berkeley, the concert did conjure visions of Vermont in the summer. If this is what Marlboro is sending out on the road, think how much more there is waiting in the wings to be discovered on the home turf.