One of the great experiences in music listening comes when you attend an "interesting" program by a musician you hadn't known at all, only to find yourself blown away by his flawless musicianship. That was the case Sunday afternoon at Old First Church, as visiting pianist Emanuele Arciuli presented a textbook example of just how well the instrument can be made to sound. 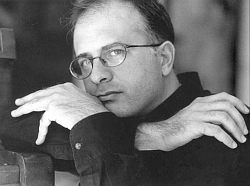 Arciuli has it all: scholarship, a dreadnought technique, accuracy, a full palette of colors, intellectual prowess, courage — and oh yes, an amazing program of "American Masterpieces." The event was jointly sponsored by the Italian Cultural Institute of San Francisco and Old First.

Arciuli opened with Charles Ives' Sonata No. 2, Concord Massachusetts 1840-1860, in its 1947 version, and after intermission he played John Adams' Phrygian Gates (1977). Those two lengthy works were enough to fill the program, but after wild applause Arciuli added an encore, an arrangement of the pop tune Bill Evans' Quiet Now.

The artist's own program notes mentioned Ives' connection to Mahler. Ives was, after all, in New York during Mahler's tenure with the Metropolitan Opera and the New York Philharmonic. He undoubtedly heard some of those performances and had contact with Mahler. It's known, for instance, that Mahler was planning to premiere Ives' Third Symphony at the time of his death in 1911. Ives almost certainly knew of Mahler's statement that a symphony should encompass the whole world, and apparently had that in mind when composing his giant Second Sonata for piano.

Each of the four movements in Concord honors a major 19th-century American writer: Emerson, Hawthorne, the Alcotts, and Thoreau, respectively. Running nearly an hour in length, the sonata can and does turn up virtually anything, in a kind of stream-of-consciousness fashion. The listener hears something akin to a montage texture at play. As far as I know, Ives was the first composer to do that in a serious way. He went far beyond mere parody, which previously was the norm.

The Sonata almost amounts to a spot-that-tune exercise, though none of the quotations hangs around for long, flitting by in seconds. Each of the four movements makes little nods to Beethoven's Fifth Symphony, but a listener attuned to the music of the time can also pick out a number of traditional hymns and popular tunes: Bringing in the Sheaves; Columbia, the Gem of the Ocean; Massa's in de Cold, Cold Ground, and the like.
Dazzling Complexity
The piece's textures can be incredibly dense or can sit in naked simplicity, particularly when Ives turned out a bit of quiet rudiments from New England church services. There are minor hints of Debussy, ragtime, marches, fox-trots, and all else. For a pianist to cope with so many opposites in so compact a form, and often in multiple styles — as Arciuli did — left me agog. I never dreamed it could be managed by a mere human.

Composed between 1909 and 1915, the original work contained a short passage for flute, accompanied by the pianist. That was and is obviously impractical, so a revision was made in 1947, eliminating the flute. I think I smell the hand of Lou Harrison's influence in that. Harrison was, after all, a major part of Ives' recognition during the late 1940s after he premiered the prize-winning Third Symphony in New York.

Adams composed Phrygian Gates while on the faculty of the San Francisco Conservatory of Music, back in the days when it was located way out on 19th Avenue. The work consists of a single virtuoso movement about half the length of Ives' whopper Sonata, and has become his most frequently performed work.

It's minimalist, of course, but soft-core. What sets Adams apart from most other minimalists is that he is less dogged about sticking to one pattern. He can sense when it's time to add on to or change the material, as opposed to, say, Philip Glass, who always repeats the same set of notes until they're well past their sell date.

Adams opens his toccata of whirligigs with repeated notes, then keeps applying new layers of material. Eventually the piece reaches an extraordinary density of sound, always tonal and never harshly dissonant. He pretty much sticks to the ancient Greek Phrygian and Lydian modes along the way. That has helped the work's popularity, not merely due to its harmonious modesty but also because of its variety and sense of climax. Indeed, I'll admit that it's one of the few minimalistic pieces I admire and enjoy.
Supremely Artistic Performances
Both Arciuli performances were astounding. I've not heard that kind of keenly polished playing of advanced piano music since the heyday of David Tudor. Arciuli's forthright renditions covered the widest range of dynamics, and were artistic in every aspect. He played the tremendous chording in such a manner that each note stood out clearly, but with just the slightest emphasis on the most important note in a harmony. That's most uncommon.

Then too, I greatly appreciated the lack of fake showbiz effects: waving the hands in the air, throwing back the head, swaying with eyes closed, and all that hokum. He must have fingers of steel. He could get orchestral volume from the instrument without lifting his palms from the keyboard, or could turn the volume from one extreme to the other on a dime.

Arciuli, who currently teaches at his alma mater, the Conservatory of Bari in Italy, and as guest faculty at the Cincinnati University Conservatory of Music, has specialized in contemporary music, with emphasis on the Second Viennese School (Schoenberg and company), plus — oddly enough for an Italian pianist — on American music. He's played the Italian premiere of Adams' Piano Concerto in Milan; performed Bernstein's Symphony No. 2, The Age of Anxiety, with the Saint Petersburg Philharmonic; and recorded major works of George Crumb.

Naturally, he's played the basics as well ... Beethoven concertos in Brazil, Bartók's Third in Italy, recorded major Liszt too. So it's odd that he's so well-known all over Europe and throughout most of South America but hardly known here. I can only hope he'll return to the West Coast, and often. Make no mistake, Emanuele Arciuli is a major pianist in the proud Italian traditions of Ferruccio Busoni and Arturo Benedetti Michelangeli.