My first encounter with the piano came from a Tom and Jerry cartoon, where Tom plays Liszt's Hungarian Rhapsody No. 2. I had no idea what it was, but it made me want to play the piano.
Lang Lang was 2 years old when that historic event occurred. A few months later, he started playing the piano, at age 5 he won his first contest ... and the rest is history.

Now, at 26, he is perhaps the most famous pianist in the world, but still with some of that Hanna Barbera devil in him: a never-ending rivalry between a pompous cat and a clever mouse, or, more precisely, between a sublime artist and a self-indulgent young man whose attention is not always on the task at hand. 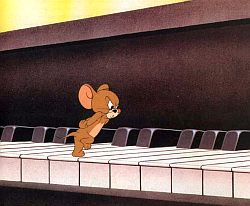 Lang Lang, for better or worse or some of each, is undeniably a Star, with a capital S.

Here’s a quantitative definition of "star": The pianist spent last week in a San Francisco Symphony residency, performing three different programs in five concerts, drawing an audience of more than 12,000. That's how far he has come in the six short years since Ruth Felt's San Francisco Performances introduced him to the city, in the 900-seat Herbst Theatre, then not quite full. 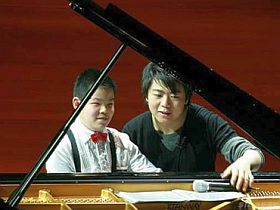 This is an artist who is a titanic pianist one moment, goof the next; who inspires young students and plays Chopin with an orange. Try as you may, you can't squeeze him into a box.

At this point of superstar-fame, Lang Lang could fall back on simply showing up and playing audience favorites, yet his San Francisco programs show an artist with a great range. In addition to the Chopin Piano Concerto No. 1, with Mark Wigglesworth conducting the Symphony on Thursday, Friday, and Saturday, Lang Lang gave a long, varied, ambitious recital on Tuesday, and played chamber music with Symphony musicians on Sunday. 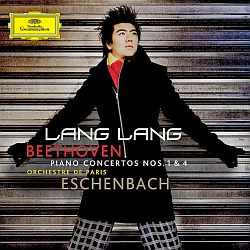 His best and worst — the awesome brilliance and the annoying posturing — were on display most dramatically at the Tuesday recital. But look at the richness of the program he selected: Schubert's Piano Sonata in A Major, D. 959; Bartók's Piano Sonata; four pieces from Debussy's Preludes for Piano, Book 1, and three from Book 2; Chopin's Polonaise in A-flat Major, Opus 53; and for an encore, Wang Jian Zhou's Colored Clouds Chasing the Moon.

The most consistent and "restrained" performances came in the Sunday collaboration with violinist Nadya Tichman and cellist Peter Wyrick. Together they played piano trios by Schubert (No. 1 in B-Flat Major) and Tchaikovsky (A Minor), and Lang Lang the Musician was in the house, and all was well with the world. 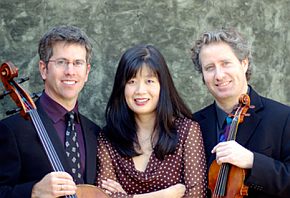 The high point came in the second movement of the Schubert, as the pianist played the simple, sublime opening notes of the Andante. Wyrick's warm, singing cello repeated the phrase, then Tichman's soaring violin took it up, as the three voices merged into a single sound of utter charm and beauty. 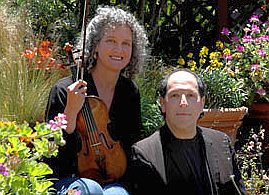 On Tuesday, in front of a mostly starstruck, adoring, and badly behaved audience — coughing and talking throughout the recital — Lang Lang played the Bartók Sonata from the score, which is something highly unusual for him. He didn't merely play the stormy, jagged, brutal, supersyncopated first movement — instead, he conquered and subdued it in a breathtaking performance.

He then shifted effortlessly (while seeming undisturbed by the totally justified between-movements burst of applause) into the entirely different world of the Sostenuto e pesante, with its sparse moonscape of single-note gloom. It was breathtaking again, but in a completely different way, this time conveying a frozen mood, rather than hurling fiery balls of energy into the air. The concluding Rondo could not compete with the varied sensations of what had gone on before. 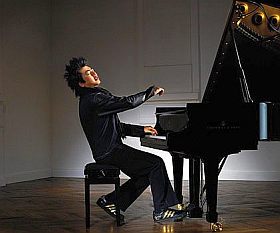 Musical rapture: an ad for Adidas

The evening's major work was Schubert's huge, sprawling, 40-minute A-Major Sonata, and here Lang Lang often punched up piano-playing at the expense of the music. He made the work a thousand pieces, most of them brilliant, though the sonata's elusive heart was nowhere to be found.

It's strange how Lang Lang's effortless playing can handicap the performance. As he is tossing off impossibly difficult passages, he finds enough time to strike poses and make faces, almost as if he needed something to do in addition to performing the music, to escape boredom. This is not only visually distracting — I deliberately spent part of the concert in the back of the hall, far from the stage, and instead of seeing the "business," I heard it in the music.

But when he has to use a score, when he is tackling a new work or plays with other musicians, the tics and distractedness fall away, and there is "only" a great pianist.