San Francisco Performances took an impressive leap of faith last week in presenting Italian pianist Marino Formenti’s local debut in not one, but three solo recitals at the DeYoung Museum’s new Koret Auditorium. In the two performances I heard, this adventurous move was rewarded with often extraordinary results. The pianist’s programs were opportunities to discover unfamiliar music played with total commitment and deep musicality, and offered a lens through which to view the relationships between contemporary composers and musical voices from the past. 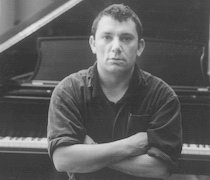 Formenti’s first program, on April 15, brought together a broad sample of the music of György Kurtág and some of the many composers who have been colleagues and inspirations to him. Kurtág is forever paying tribute to musical masters past and present, including many of his Hungarian colleagues. Through his personal idiom of brief, intense works, he reveals a connection to the history of Western music that is deep, unusually self-conscious, and remarkably original.

Formenti emphasized Kurtág’s interest in homage through a program that interspersed the composer’s music with that of his honorees. The recital opened with a melody by Machaut, offered a healthy dose of Baroque, Classical, and Romantic masters, explored some of the “Hungarian style” music produced by European composers (Hungarian and otherwise), and moved forward into the 20th and 21st centuries.
Virtuosity, Old and New
Formenti succeeded in shedding new light on both Kurtág’s music and that of his influences. He used the composer’s penchant for exploring the physical limits of instruments and the theatrical dimensions of musical virtuosity to frame works with similar intentions. These were made clearer by the context. Haydn’s Il Terremoto (The Earthquake), for example, became startling and forceful when surrounded by the lunging keyboard gestures in Kurtág’s works. The instrumental imagination behind Domenico Scarlatti’s sonatas, in the same part of the program, seemed fresh and exploratory.

Formenti also brought an exquisite sense of line and a great range of colors and shadings to the Baroque works on the program. These qualities helped to amplify Kurtág’s direct connection to that era’s clarity of expression and contrapuntal mastery, and especially revealed his affinity with Bach.

Kurtág’s referential approach to composition lends itself to this type of back-and-forth program, and I’ve heard it done effectively on a couple of other occasions. Formenti, however, made one broad aesthetic choice, to perform the multiwork program almost without interruption, which strongly altered and somewhat weakened the dialogue between musical thinkers. A number of years ago I heard the Keller Quartet perform a sequence of Kurtág’s string quartet works in alternation with sections of Bach’s Art of Fugue. The generous silences that surrounded the pieces gave each composer’s works, and the relationship between them, greater profundity as the program continued.

In Formenti’s case, the interactions between the many works on the program seemed more interruptions than dialogues. With 35 works in each half of the program — many of Kurtág’s are a minute or less — perhaps this pacing was unavoidable. Or maybe Formenti favored a postmodern jostling over the stark classicism of the Keller-style approach.

The pianist’s rapid pace also left less room than usual for rhythmic liberties in the works by Schubert and Schumann, though again, Formenti’s approach offered a different perspective on those composers. Whatever questions his aesthetics might raise, what was most memorable about this evening was the level of passion and ability that Formenti used to support so many different musical voices, and his capacity to reveal surprising dimensions of music both new and familiar.
Exploring the Boundaryless Contemporary World
Formenti’s final recital of the series was a wonderful combination of musicality and imagination from both the pianist and the composers he featured. Homage and memory also proved to be important elements in this traversal of (mostly) recent works. Theatricality and an expanded sound palette were prominent, as well.

One of the many pleasures in contemporary composition is the sheer range of its expressive approaches, transcending the need for any particular stylistic allegiance. At one end of the program’s spectrum was Alvin Lucier’s Music for Piano and Amplified Sonorous Vessels (1991), a sweetly transporting music of radical simplicity. Single-note, mostly tonal figures gradually accrued, while microphones, hung in an array of vases and bottles surrounding the piano, captured overtones. The focus was on the pleasure of sound, and Formenti’s performance achieved qualities of peace and timelessness.

At the other extreme, Galina Ustvolskaya’s Sonatas Nos. 5 and 6 (1986, 1988) featured harshly played tone clusters as their dominant element, relieved by brief, rich harmonic passages and spare counterpoint of Bachlike purity. The cumulative effect was one of both rage and deep humanity, and Formenti’s performance was riveting.

Helmut Lachenmann’s Guero (1970), also focused on new sound possibilities, and was one of several pieces whose musical value was amplified through their equal standing as works of theater. Formenti began by attaching contact mics to his hands, and proceeded to scrape and tap the front and sides of the keys, the soundboard, and the strings. In a work that largely avoids pitch, the pianist produced a performance of great momentum and sonic and visual interest. The same composer’s more conventional but no less appealing Wiegenmusik (Cradle music, 1963) gave Formenti an opportunity to display his loveliest playing, particularly in the exceptional range of colors he produced at the keyboard.
A Gentle Tombeau de Nono
Formenti also discovered a range of expressive contrasts in two works by Salvatore Sciarrino, a major composer whose work is too seldom heard here. First came the lovely and contemplative Perduto in una Citt? D’Acque (Lost in a City of Water, 1991). Written to mark Luigi Nono’s passing, the work slowly and patiently unfolded, with a sense of the nature of music itself being discovered. The Notturno Crudele (Cruel Nocturne) No. 2 (1999) tested the pianist with fleeting flourishes in the piano’s middle range leaping outward to either end of the keyboard. Formenti’s performance was filled with biting energy.

Another work recalling the first recital’s emphasis on musical tributes was Georg Friedrich Haas’ Hommage à Ligeti (1985), for two pianos tuned a quarter-tone apart. The work consists only of rapid repeated notes and chords on both pianos, played loudly and amplified with electronic reverb. This relatively simple idea made a marvelous effect, with the richly clashing chords achieving a driving power. I was reminded of Ligeti’s love of new sounds, his attraction to rhythm and repetition, his ability to use them in new ways, and his special talent for choosing an idea, whether simple or complex, and taking it as far as possible. More than that, I was simply carried away by the newness and beauty of this music.

The program grew more theatrical toward its end, with John Cage’s engaging Music Walk (1985), performed on a series of radios and a slightly abused piano, and then Lucier’s music again. Nothing Is Real (Strawberry Fields Forever) (1990) is the composer’s straightforward transcription of the Beatles song, played in single-note lines, dreamily spread across the piano’s range.

But it was followed by a surprise: Formenti lowered the piano lid, placed a teapot on it, and carefully opened and closed the lid of the teapot as a recording of the piece emerged from within it. This utterly charming moment was a fine conclusion for the concert, but Formenti played each work so convincingly that almost any order could have worked. I look forward to his next visit, as it’s rare to receive the gift of a performance whose quality is matched only by its uniqueness.