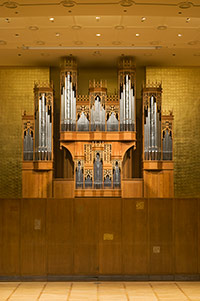 How does one have a pipe organ acquired and installed? “Carefully” — the obvious, answer — is how the fine Noack organ found its way from a discontinued Delaware church to UC Berkeley’s Hertz Hall. On Sunday afternoon, the university organist, Davitt Moroney, the wise guide of this operation, produced a broad-ranged performance. It was a musically grateful display of the many shades of the hall’s new voice, beginning with three sets of solo works from the Baroque era. Then the University Orchestra joined in with the strikingly different, famous, and climactic “Organ Symphony,” Saint-Saëns’ Symphony No. 3.

Moroney opened with Purcell’s Voluntary in G on the Noack’s Great section, its broadest, which produced a full sound for this majestic piece that grows, increasing in ornamental flourishes. The reeds were next brought into play on Froberger’s A-minor Fantasia, cleanly defining exquisite counterpoint made of a short subject, chromatically inflected. The Positive section of the organ, front and center, produced the warmer, darker color for the variations in J.C.F. Fischer’s F-major Chaconne, the 16-foot pipes producing deeply, sympathetically, absorbing. Moroney, in his gentle urbane manner, never didactic, introduced each set of pieces and the organ’s different personalities revealed in each piece.

Of course there was Bach, consisting of three Chorale Preludes from his Orgelbüchlein: O Mensch bewein in a bright voice, with lovely ornamentation by Moroney; Christe, du Lamm Gottes, its scale passages in canon and its five voices clearly defined; and finally the expressive, thought-provoking Wenn wir in höchsten Nöten sein.

Davitt Moroney, the wise guide of this operation, produced a broad-ranged performance. It was a musically grateful display of the many shades of the hall’s new voice.

Closing the organ solo first half came four works composed between 1653 and 1656 by the head of the great Couperin dynasty, Louis. This music, which came to light only some 60 years ago, was here revealed in the organ’s full sound. But still, the intricate counterpoint on almost-minute themes was always clear because the stops are so cleanly defined. There was a Prelude, then the Fugue sur la Chromorne, a tight nasal reed stop, a Fantaisie for the most intimate (one might say personal), softest register of flutes. Finally it was all-stops-go, with the organ’s full throat opened up in the Fantaisie of 1653.

After intermission, the UC Berkeley Symphony Orchestra came on, introduced by a glowing exposition from Moroney about its 90-year history, its consistently impressive qualities, and its first international tour planned for Europe, to Prague, Vienna, and other cities next year. His point was the need for contributions to support this enterprise that has no institutional funding source. Typically, most students in this large, full-size symphony are majors in every conceivable discipline at the university, yet they play as impressively as if music came first in their lives.

Most students in this large, full-size symphony are majors in every conceivable discipline at the university, yet they play as impressively as if music came first in their lives.

The UC Symphony brought off the Saint-Saëns handsomely. All was strong, the strings being sectionally unified in both performance and tone and the woodwind principals being very fine. The Symphony’s first movement, however, was just satisfactory, owing to the tricky problem of a quickly articulated offbeat attack that the composer’s music imposes on the strings, and to overbalancing brasses. With unduly advantaged seating against the back wall, they wanted an upraised palm signal from the conductor, David Milnes, to temper their enthusiasm. Ditto the overachieving timpanist in the last movement. Milnes conducts well, having prepared the orchestra finely, and to the point where it doesn’t need extensive gestural painting (which he resists).

The organ part was a treat, specifically because here it didn’t blast out the windows or blow the listeners out of their seats. It was a participant, another section of the orchestra, a soloist and a colleague, not a competitor out to whelm and wow. For once in this piece, the organ entrances were gracious and tasteful. Well done. Many prefer a longer reverberation time for an organ than Hertz Hall provides, but not I. The clean cutoff is very grateful.

About the organ: It’s a three-manual tracker action instrument — that is, its keyboard and 35 stops are operated mechanically, not via electric-pneumatic action. Moroney found it in the closed Episcopal Cathedral of St. John in Wilmington, Delaware. It was shipped back to the Noack Organ Firm of Georgetown, Massachusetts, for cleaning and repair, then to Berkeley for installation. All that, and the purchase in the first place required just the monies available in the University’s O’Neill Organ Fund (with some left over). It makes for a happy ending, or rather the beginning of a long life