Competitions play a smaller role in jump-starting the careers of chamber ensembles than they typically do in launching instrumental soloists. Even so, if your ensemble is something as specialized as a string trio, it doesn't hurt to have a high-profile competition victory or two to your credit. The Janaki String Trio, formed at the Colburn School of Music only three years ago, won the Coleman Chamber Music Competition in 2005 and then the Concert Artists Guild Competition in 2006. The double triumph has afforded it more attention than so young an ensemble ordinarily gets, especially one with so rarefied a repertoire. 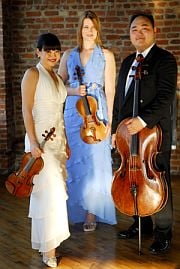 Cantor Roslyn Barak, artistic director of Temple Emanu-El's Music at Meyer concert series, introduced the trio's recital Monday evening by remarking that she'd looked into inviting the ensemble after reading an enthusiastic review of its Carnegie Hall debut in The New York Times. Now that the trio has a direct link to the Bay Area — Katie Kadarauch, a Bay Area native, was named associate principal violist of the San Francisco Symphony last year — we can expect to hear news of it less circuitously. On the basis of Monday's recital, I for one hope it makes frequent return visits.

The string trio repertoire is tiny, but what is there is of remarkably high quality. Then you can always commission new works. (The Janakis are already on their third commission, a forthcoming trio by Pierre Jalbert.) And by adding a guest artist you have access to the large body of piano quartets, string/wind quartets, and other things — the Janakis have already programmed Arensky's second string quartet, scored for the odd combination of violin, viola, and two cellos. Add it all up and you have a repertoire out of which an enterprising ensemble can make a substantial, if slightly ramshackle, career.
Schubertian Surprises
The Janaki recital began with Schubert's one full-length string trio, the B-flat-Major D. 581. (There's also a single-movement torso in the same key.) D. 581 is a piece that has blindsided generations of amateur chamber musicians. The first three movements are brief, charming, and eminently sight-readable for players of moderate ability. Then comes a finale that starts with one of those innocent, cute-as-a-button Schubert themes — think of the second item in the Rosamunde incidental music — and then proceeds to throw at the players an obstacle course's worth of wickedly unreasonable technical demands. One moment the sky is clear and the water calm, the next you're fighting for your life in a raging sea of sextuplets in some ungodly flat key.

The same could be said of the trio's performance, postintermission, of the string trio genre's one unquestioned masterpiece, Mozart's E-flat Divertimento, K. 563. Here, though, there were places where it all sounded a little too easy. There was a certain refined breeziness, a musical flow so genial and so effortless as to smooth over the piece's strains and resistances.

Part of the problem was an internal balance that was deferential to a fault. The players subordinated "accompanimental" material almost to the point of self-parody in places. Some violin and viola chords in the first Menuetto were composed chiefly of air, apparently so as not to cover the cello. Even the leading lines, though, tended to over-refinement.
Finely Matched Players
Cellist Arnold Choi is a lovely player, and it was a pleasure to hear even this murderously difficult part dispatched with such liquid, mellifluous ease. But I kept waiting for him to play genuinely full out, and it never happened. There was always a sense of tone held back, made more frustrating by the fact that you could easily imagine what he would sound like if he let loose.

No one could say the same of Kadarauch, who made the most of the viola's many moments in the sun. What a strikingly dark, characterful sound hers is. I hope we can look forward to her making an occasional appearance on the Symphony's chamber programs. McKinney, for her part, is a fleet and elegant violinist who nonetheless can light into passagework with great ferocity. The way she zipped through the sixteenths in the Mozart's finale almost made the Janakis' recklessly fast tempo a success.

The trio omitted all repeats in the first two movements of the Mozart, which seems to me a mistake, despite the work’s greath length (50 minutes, with repeats). Still, the exposition repeats, at least, are standard practice. Barak, however, mentioned in her introduction that the players "had a plane to catch at 11," which could explain the cuts. (Kadarauch, certainly, had to meet up with her symphony colleagues in New York for the opening concert of their tour the following evening.)

In between the two older works came Andrew Norman's 2007 Alabaster Rounds, written for the ensemble. The piece, as McKinney explained to the audience, depicts a sunrise at Rome's Santa Sabina all'Aventino, a fifth-century basilica whose many windows allow the light to play in intricate patterns on the alabaster walls. The work begins with subtle undulations over an open-fifth drone. The waves increase, separate, rise in ever-widening spirals. At the peak of the music's intensity, the blinding light vanishes and the viola is left suspended in the heights. It floats serenely back down to earth, where the other two instruments join it in a brief, heterophonic suggestion of plainchant and a murmuring allusion to the piece's opening.

The work thus has, as McKinney pointed out, much the same arc as Barber's Adagio for Strings, though the material and the effect are both quite different. According to McKinney, Norman is considering making Alabaster Rounds the nucleus of a larger, multimovement work depicting several Roman buildings. But I find it hard to imagine this dazzling and implacably self-contained musical image working as a part of anything. There's a reason that the Barber Adagio is a lot better known than the string quartet of which it was originally the second movement.