An ominous postcard greeted San Francisco Symphony subscribers a month ago. Upstart visiting conductor Ingo Metzmacher was abandoning all semblance of 19th-century comfort, and would drop an Antonín Dvořák symphony in favor of one by Dmitri Shostakovich, and thus forge, along with music by György Ligeti and Béla Bartók, a "triple threat" program consisting solely of works written after the beginning of World War II.
Why triple? To the musicians, the music is probably difficult and unfamiliar — could they learn/rehearse it in time to do it justice? To the audience, hope of pleasure was dimmed — could they apprehend all the newness, unleavened with friendly doses of tried-and-true classics? And to financial monitors, would revenue and P.R. be imperiled — and would there be a half-empty hall and letters of complaint?

Thankfully, the triple threat turned into a triple treat as Metzmacher, an orchestra in top form, and pianist Hélène Grimaud brought forth audience cheers (in a reasonably full hall) and, for my part, intense critical engagement. The genius of Ligeti's San Francisco Polyphony made me marvel at the logistics of its apprehension. Grimaud's impassioned playing of Bartók's Third Piano Concerto stimulated reflection on the composer's farewell to life. Finally, the inclusion of Shostakovich's problematic Sixth Symphony forced a consideration of its merits relative to the Russian's other 14 contributions in that form.
Failed Resume
If San Francisco Polyphony were to have a resume, it would never get a job. The boss would say, "Let's see: fathered by an avant-garde composer in 1974, can't play a tune, emits weird sounds, has no decipherable structure, constantly challenges coworkers [musicians] — no way!" But in person, it seemed a different candidate entirely, especially as well-played and conducted as it was last Thursday.

For one thing, this is at least the third time the work has been programmed locally, and it sounds like it's in the orchestra's blood. (The score was commissioned for the San Francisco Symphony's 60th anniversary and performed again nine years later.) Second, strange as the sounds are, they are nevertheless clear, clever, and captivating. Ligeti can project a sense of wonder.

Third and most positive of all, like multiple Dante-guiding Beatrices, nibblets of evolving repetition keep the listener from getting lost. This is despite a route through what sounds like an abandoned factory of rusting, indecipherable machines, some of which are still operating, others of which are suddenly illuminated with shafts of light from hidden recesses. As the composer himself admitted, the result sounded more like Vienna than San Francisco.

Contrasted with the Ligeti was Bartók's final piano concerto, composed when he was racked with leukemia and had to leave it incomplete, marking indicators in the last 17 bars for his friend Tibor Serly to decipher. While Grimaud's performance was note-perfect yet somewhat dry in the outer movements, it was marked by uncontainable passion in the Adagio religioso. I sat in the first row center, saw the red flush grow on her neck, and heard her labored breathing as she conveyed the benedictive magnificence of that simple chorale.

I pondered what the music must have meant to the composer, who wrote the concerto as a means for his pianist wife to support herself in his absence. And then I heard the notes of the bird calls and other nods of reverence to the world of nature to which he was headed, dust to dust, and I thought of my own peace in the face of the inevitable when I suffered from throat cancer last year — and I knew I could not write an objective review.
Flawed Symphony
It's been nearly 18 years since the S.F. Symphony last played the Sixth Symphony of Shostakovich. Is it a neglected work deserving of more attention? The stats and first movement say no; the finale says "More, more!" 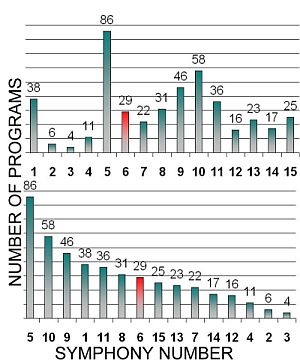 Twenty-nine times is a respectable showing, nearly as many as the Eighth (at 31 times), which some critics consider the finest symphony. The Sixth has been programmed more times than better symphonies, in my view — the 13th (23), 14th (17), and 15th (25) — and far more times than the large-orchestra Fourth (played 11 times), which should be among the top five, if quality had anything to do with it.

Suffice it to say that Metzmacher and company made a fine case for the work, particularly in the jocular and frantic Presto finale. The first movement Largo, however, is a disaster no matter who plays it. The single climax appears seven minutes in, leaving 12 more minutes of noodling around to little effect. While the initial theme has some memorability, the rest of the motives have little to recommend them.

With the exception of the third movement, which should be considered as a stand-alone excerpt for pops concerts, the best that can be said for the work as a whole is that it provides a workshop for ideas better exploited in other symphonies, such as the dotted William Tell Overture gallop in the 15th, racy strings in the opening movement of the Ninth, and multiple echoes of Mahler in the Fourth.

The audience's response to the Shostakovich, and to the concert in general, was respectable, although probably not as thunderous as it would have been had the Dvořák Seventh been played as originally programmed. In the end, the triple threat of unrelieved modernity dissolved in the face of engaging, timeless music.