A full and appreciative audience greeted the local farewell program of the Beaux Arts Trio Sunday evening in Herbst Theatre, presented by Chamber Music San Francisco, as the ensemble is about to bring down the curtain on its glory-filled concert career.
To mark the occasion, Mayor Gavin Newsom even issued a keys-to-the-city proclamation that declared April 20 to be "Beaux Arts Trio Day in San Francisco." I don't know about the day, but it was surely the Trio's night, for it played an exceptionally subtle program, even by its traditionally high standards. 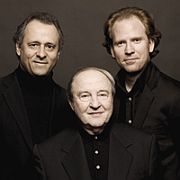 The Trio, which was founded in 1955, opened the program with Dvořák's Trio in E Minor, Op. 90, "Dumky." (Listen here.) Following intermission came György Kurtág's Work for Piano Trio, a brief piece played twice in a row, before Schubert's big Trio No. 2 in E-flat Major, Op. 100 (a substitute for the Trio No. 1, Op. 99); the Beaux Arts simply thought the more somber Op. 100 was appropriate to the occasion.

The audience was beside itself with appreciation and plaudits, as the musicians responded with a generous spread of encores. (More on that later.) Those multiple standing ovations were for once thoroughly deserved.
Exquisite Beauty
Obviously, the one unusual occurrence was the four-minute Kurtág Work. I've always admired Kurtág's music, at least that which I've heard. His music is original, soft-core 12-tone, and essentially lyrical. Born in Romania in 1926, he studied both in his homeland and in Budapest and Paris — with Milhaud and Messiaen.

We don't hear enough of his music, but that's because he concentrated on short pieces for chamber music combinations. In that sense, his output is like Anton Webern's. As far as I can tell, he hasn't written any music for large orchestra, nor any full operas or ballets.

But make no mistake, this music is exquisitely beautiful in its dainty way. About the nearest comparison in sound would be the music of Morton Feldman. Pianist Menahem Pressler spoke to the audience, telling us that, due to its brevity, the Trio would play the piece, then repeat it. As far as I'm concerned, three times would have been even better. (The program booklet contained no notes on the piece, but I'd assume it was written specifically for the Beaux Arts.)

Ukrainian in origin, the "dumka" form got taken up in Poland and Bohemia only during the 19th century. (Dvořák's "Dumky" uses the plural form of "dumka.") It's a compound rhapsodic form consisting of alternating laments and lively dance bits. The original idea stemmed from concepts of epic folk poetry, which partly accounts for the various solo recitatives for the two string instruments. "Epic" is certainly the word for Sunday's performance.
Fabled Playing
The expressive taste displayed during solo passages, begun by cellist Antonio Meneses and followed by violinist Daniel Hope, was highlighted by flawless intonation and the Beaux Arts' fabled range of adroit dynamics. Every little element was right on target.

All this was typical of the Schubert performance, as well. The balances and sense of proportion amid the three musicians seemed nearly telepathic. Their feel for perfect ensemble playing was almost spooky.

Why the Trio is giving up touring at this stage of perfection is puzzling. Pianist Pressler, now 84, has lost none of his considerable virtuosity. He played as well as he ever did, in a style highlighted by a sensitivity to timbre and a beauty of tone that rivals the best of that sort of playing. Bravura passages achieved a near-orchestral sheen, free of percussive attacks. And the little pearly rivulets in the Schubert figurations were like twinkles in the night sky. Pressler's loss to live concerts performances, and indeed the Trio's, is a regretful event indeed.

A bountiful set of encores began with the Scherzo of Shostakovich's Second Trio. As Pressler was announcing the second, he cautioned that were not going to play the remainder of that Trio, whereupon someone in the rear yelled out, "Why not?"

Instead, the Trio played the zesty finale of Haydn's Trio No. 7. Two encores are the norm, but, as Pressler noted, "We can't leave without playing Beethoven." The result was a lovely reading of the Adagio from Beethoven's Trio No. 4, the Op. 11.

So all right, this marks the end of a great ensemble. Yet the Beaux Arts Trio has left us a rich legacy of recordings, which include virtually the entire trio repertory, minus a few 20th-century pieces. Even so, they'll be mightily missed by those who delight in high artistry.