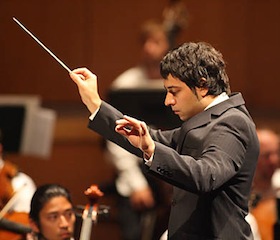 High among the more stimulating musical experiences is listening to a good youth orchestra or, as on Sunday night, to a fine university symphony orchestra — that of UC Davis in the handsome and gracious Jackson Hall of the Mondavi Center. With the mostly student membership playing at their capacity, some over their heads, the discovery of the repertory combined with the energy and excitement level, proved that the commitment more than compensates for imperfections. Conducting was Christian Baldini, its regular director, who led the UC Davis Symphony last month on a 10-day tour of Spain.

Some from the faculty and the community and at least one outside professional are included in the roster of 120 of mostly students majoring in ABM (anything but music).

Truth to tell, the sensuous qualities of the opening work, Fauré’s rarely played Prelude to Pénélope, a three-act opera (1912), need the rich sonorities of a major orchestra to bring it off. Written in a Wagnerian, chromatic style, it’s a dark and somber piece with none of the gracious, delicate lyricism of Fauré’s best-known works.

More to the point was a bright new work that Ross Bauer, senior composer on the faculty, had written for the orchestra and four professional soloists with whom he has long been associated. Baton, a concerto for flute, bass clarinet, violin, cello, and orchestra, is distinguished from a sinfonia concertante in part because the quartet plays less in concert as an ensemble than as soloists successively leading the orchestra, one passing the baton to the other, hence the title.

Bauer picks up the character of each instrument. The violinist, Hrabba Atladottir, played a lively virtuosic role against a gentle orchestral background. Thalia Moore had a long-lined, songful cello solo. Peter Josheff on bass clarinet punctuated the orchestra texture. With the flute taking the anchor leg, Tod Brody played to the increasingly activated orchestra with various flurries and both rhapsodic and serene passages. For all the invention and fantasy in the work, however, it comes to an unexpected, unprepared end: It falls off the table.

For all the invention and fantasy in the work, it comes to an unexpected, unprepared end. It falls off the table.

The one letdown in the program was not the orchestra’s responsibility. Baldini led a fine and clear orchestral accompaniment to Mahler’s Lieder eines fahrenden Gesellen (Songs of a wayfarer), with its colors and dramatic strokes. There is no better-known Mahler piece, but not to the evening’s soloist, Wolfgang Brendel, a broadly experienced opera baritone (seven major roles at the San Francisco Opera alone between 1979 and 1991, and an eighth in 2006). Positioning himself behind a music stand, he read this classic short song cycle off the book as if it were a new piece. Interpretively, the emotional arcs were as flat as the stage. Although he’s only 65, his formerly rich and dark voice is now dry, lacking expressive range and nuance, strained and straight at the top.

Baldini closed the evening with Kodály’s Dances of Galánta (1934) a kind of Hungarian/Slovak answer to Enesco’s Romanian Rhapsodies (1903). The chain of five dances starts slow and strutting — the big clarinet solo in high Gypsy style by Robert Brosnan of the faculty, in the first chair — and then turns fast and precipitous, the strings, piccolo, and flute tearing up the stage and having the last word.

Not quite. There followed a reception honoring D. Kern Holoman, professor of music, on the publication of his new biography of conductor Charles Munch.