It's yet another measure of how good we, the listening public, have it in the Bay Area that while the seasons of our "major presenters" would keep a voracious concertgoer pretty happy by themselves, you could eliminate every one of them from consideration and still put together a full — nay, impossibly overfull — calendar of first-rate recitals out of the offerings of the smaller concert series.
Monday night saw the opening of the fifth season of Music at Meyer, the concert series at the lovely Martin Meyer Sanctuary of San Francisco's Temple Emanu-El. I've not dipped into this series before, but I certainly shall again, because both the venue and the roster of performers are superb. The Alexander Quartet's wide-ranging program brought out a capacity audience, so evidently the secret is long out. 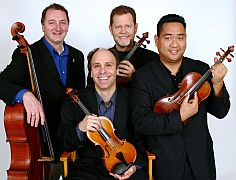 The announced program was to feature selections from John Adams' John's Book of Alleged Dances, for quartet and tape, but in the event the Adams was replaced by Mozart's little F-Major Divertimento, K. 138. The piece is one of a set of three that have long been the subject of a minor turf war between chamber orchestras and string quartets — whose are they, really?

The chamber orchestras appear to be winning the argument, at least in terms of numbers of performances. Quartet performances of these three so-called "Salzburg Symphonies" are rare. (Rare in concert settings, that is; for gigging string quartets — playing parties, receptions, and the like — the pieces are core repertoire, indispensable.)

They do have some awkward features considered as quartets. The big one is the chugging-repeated-eighth-note material that makes up, for example, a goodly fraction of the bass line of K. 138's first movement. In an orchestral context, this isn't particularly noteworthy, but for a quartet cellist, playing such stuff so as to sound neither mechanical nor inappropriately "interesting" is tricky.

The Alexanders' Sandy Wilson went for straightforward, supportive, and meaty in the outer movements. The approach still seemed to me a little off, but it meshed well enough with the bluff vigor prevailing in the upper strings. This was pretty large-scale playing of essentially small-scale music, but great fun for all that. (I liked, too, first violinist Zak Grafilo's occasional mild forays into embellishment.) The central slow movement, which is the glory of this piece and indeed the main reason quartet players take it up now and then, was exquisitely played. Grafilo inflected his cantabile line with memorable delicacy, and the other players gloried in the movement's many long, sweet dissonances without wallowing.
An Off Shostakovich Ninth
Enough string quartets have taken to playing (and recording) the Shostakovich quartets as a cycle that none of them can be said anymore to be genuinely unfamiliar music. All the same, there's a fairly sharp divide between the ones apt to turn up on any random quartet's repertoire list (Nos. 1, 3, 4, 7, 8, maybe 11, maybe 15) and the ones that are primarily the province of ensembles working through the entire cycle. The Alexanders belong in the latter camp (see our review of their new complete recording here), and the Ninth Quartet, Op. 117, is decidely the latter sort of piece.

It's a longish quartet, in five movements that run into one another, all bound together by a few common melodic cells and harmonic quirks but nonetheless disconcertingly various. Keeping a handle on all the different (and often abruptly juxtaposed) material is one of the challenges; another is dealing with the long stretches where one particular kind of stuff keeps going and going. Chunks of the third and fifth movements can raise the suspicion that Shostakovich needed a short break from time to time and left his scherzo-generator on automatic in the interim.

The way to deal with both difficulties, as the Alexanders have evidently discovered, is to exercise patience. They saved their attention for the long span and did not make an attempt to make everything spuriously eventful. A piece that can sound alarmingly run-on acquired something like an intellidid note trajectory. "Something like," in that there remain things in there that I doubt any performance can make entire sense of (what is up with those ferocious outbreaks of pizzicato recitative, Dmitri?). But Monday's performance came about as close as I've heard.

I wish the technical standard had matched the interpretive one. Granted that the Alexanders on an off night are still an awfully strong quartet, there is no denying that this was an off night. There had been some whiffs of dubious intonation in the Mozart opener, but in the Shostakovich, with its often-spare textures and yards of octave doublings, the problems were more severe and more pervasive. Violist Paul Yarbrough in particular seemed to be often uncomfortable, timbrally as well as intonationally, and I wondered whether the weather was playing hell with his instrument. The standard of playing remained high, but relative to the technical standard the Alexanders have repeatedly set for themselves, it was disconcertingly uneven.
Brahms With Glee
Some troubles persisted into Brahms's Third Quartet, Op. 67, which came after intermission. (The outer movements of the Brahms, too, are full of exposed octave-doubled writing.) There were a number of smudged unison attacks, too — another thing you don't usually hear from the Alexanders. That the occasional sloppiness kept distracting my attention was a shame, because otherwise the performance was excellent in a host of ways. The outer movements of the piece, the first especially, are full of rhythmical and metrical complexities unusual even for Brahms — threes against fours, syncopations, and so forth — and the Alexanders were obviously having a ball with them.

The inner movements, for their part, were both deftly handled. The Alexanders have the right idea about the second movement, which was unusually restrained, almost chaste, rather than the more usual gush-fest. The viola-led third movement suffered a bit from what seemed Yarbrough's continuing unease, and the viola/first violin duo-cadenza was strangely matter-of-fact. I liked the coy tone of the Trio, though, and the coda was simple but stunning: in tempo for once, and not made much of, just suddenly settled and serene as though all the preceding agitation had evaporated.

The variation finale contains one passage that's a notorious interpretive conundrum. The theme has an upbeat, and therefore so do its variations. But in one strange variation, the upbeats are tied across the barline. In fact, there's nothing to indicate that the downbeat actually is a downbeat. Play it straight, and the ear will take the upbeat for a downbeat; the only way to prevent this to put some sort of unnatural emphasis where the downbeat actually falls — a swell in the upper strings or an accent on the cello's pizzicato (that being the only thing that actually happens "on the beat").

The Alexanders Monday were absolutely deadpan, such that no one who didn't know the score could have guessed where the beats in fact fell. I don't know whether this is the best solution — surely the displacement of the barline ought to mean something audible — but it's certainly the most natural-sounding one.

After that point, elements of the first movement get thrown into the mix, and the movement ends in a complex and yet infectiously joyous stew of competing rhythms and themes and reminiscences that the Alexanders tossed off with transparent glee.