For 21 years, the Coro Hispano de San Francisco has been singing to accompany the Three Kings who make their annual Epiphany trip 12 nights after Christmas. Saturday's "Concierto del Dia de los Reyes," the fourth of five performances around the Bay Area, was held at St. Joseph the Worker Church in Berkeley. The program, organized and conducted by Juan Pedro Gaffney Rivera, was a feast of Hispanic music ranging from the 10th to the 20th centuries.
Coro Hispano is a combination of singers united by their love of the Spanish language and repertoire. They are amateurs in the original sense of "lovers." Their palpable love of this music is expressed in a wide range of musical styles — medieval, Renaissance, Baroque, folk — as well as nationalities and cultures such as Mexican, Peruvian, Cuban, Guatemalan, Spanish, and Puerto Rican. 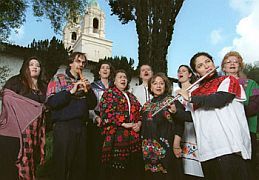 The program included chants, solos, small vocal ensembles, and large choral pieces. Some were a cappella, while others were accompanied by an excellent band of winds, strings, pluckers, and percussion. Although some pieces were less than perfect in ensemble or tuning, or were vocally ragged in spots, the program was full of real gems of repertoire and accomplished singing and playing. Following are some highlights from the performance.

Baritone John Kendall Bailey began the program with expressive chanting of a 12th-century lectionary on the Feast of the Epiphany. He was also a standout as the King who brought myrrh to Jesus, in the piece that closed the concert, an Epiphany carol from Puerto Rico arranged by Gaffney.

Another memorable moment of chanting came near the end of the concert. Salute flores mártyrum (All hail, ye little martyr flowers) is a 10th-century Vesper hymn for the Feast of the Holy Innocents — the babies said to have been killed by King Herod in his effort to destroy the special baby he considered a threat to his rule. The men of the chorus sang the first verse in unison, the women the second, and everyone combined in the third. All sang in perfect unison, the chant rising and falling with no hint of vocal effort.
Gallant Musical Jousting
A splendid 17th-century villancico by Juan Gutierrez de Padilla, Las estreyas se rien (The stars shake with laughter), told the story of the arrival of the Three Kings. A solo trio — Mimi Ruiz, Cecilia Englehart Lopez, and Mark Hernández — sang with the chorus, sometimes in alternation and sometimes in combination. The Kings arrive on horseback and engage in celebratory jousting on their way to the cradle. "How bright their finery shines" (trio). "How elegant their livery" (chorus). "How skillfully they challenge" (trio). "How gallantly they engage" (chorus). Both: "This indeed is celebration of the Holy Night!" The choral sound was full and rich, and the exchanges between trio and chorus were elegantly realized.

Hernández sang a mesmerizing 14th-century Sephardic song, Cuando el Rey Nimrod (When King Nimrod went out), celebrating the birth of Abraham. His singing, sinuous in sound, ornamental, using expressive scoops and bent notes, was well-adapted to the unique sound and style of the accompanying oud, and was supported by a tambourine discreetly punctuating the first verses and finally defining a complex rhythm.

From the archives of Puebla Cathedral, Alonso Mallèn's Como Chamorro es alcada (Now that Chamorro is mayor) was an example of low humor and political satire from the 18th century that still speaks to our condition in the present day. David Varnum was the mayor of Bethlehem, strutting about in a suit and top hat, carrying a magisterial cane and using a cell phone. He came to view the baby Jesus (a doll in a basket) and to inquire into the status of this illegal undocumented immigrant, who was reputed to be a problem for established authority. Backed up by the chorus, he invoked the law and called in two cops to take the baby to jail.

Las mañanitas guadalupanes is a group of Mexican folk songs addressed to Our Lady of Guadalupe, arranged for chorus by Gaffney. Indigenous Mexicans praise Our Lady and describe one of her miracles. Mezzo-soprano soloist Yolanda Torres-Kirkpatrick sang of the miracle with rhythmic fluency and a distinctively straight-toned color that might not suit a different repertoire but that in this song carried impressive authenticity and power, projecting easily over the chorus and band.

The 20th century was represented by a Cuban son for the nativity (son being a Cuban call-and-response song form). Cantándote un son, by Roger Hernández, was sung by Mark Hernández, the chorus chiming in on "cantándote un son, Señor" (singing you this son, O Lord). The band provided robust rhythmic underpinning, ending the first half of the concert with panache.

In place of an encore at the end of the concert, the chorus sang a spontaneous polytonal Happy Birthday to their director, who turned 70 that day.