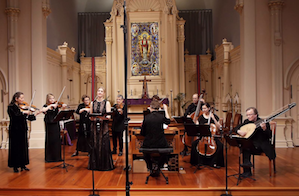 The Lamentations of Jeremiah are Biblical scoldings by the eponymous prophet. Ottaviano Petrucci chose a few of them and arranged them in groups, each ending with a plea: “Jerusalem, return to your God.” Petrucci’s 16th-century collection was a triumph of early-music printing. Scarlatti, two centuries later, followed the example of several famous composers. Each Latin verse begins with a letter of the Hebrew alphabet. Composers have chosen to set these letters in long, lavish embellishments, as they are embellished by artists in Petrucci’s edition.

The people of Jerusalem are accused of abandoning their God and his laws; their elders have given up, their women hang their heads, their children faint. Their enemies have subjugated them. Blaise brought a strong attack to a line like “all her friends have despised her.” She described the piling up of indignities in impressive coloratura, and a nice long legato line mourned the people’s abandonment of their laws and prophets.

Two of Petrucci’s groups of lamentations were performed. As the second ended, the violins were increasingly agitated, and Blaise made a final strong plea to return to the Lord. The audience replied with prolonged applause.

Featured soloists were violinists Kati Kyme and Elizabeth Blumenstock and cellist Shirley Hunt. These people can play really fast, and they ended in a blaze of glory.

The outstanding instrumental Voices of Music framed the Lamentations with concertos by Handel and Corelli. Five solo violins and violas were supported by a continuo of organ, archlute, cello, and violone. Handel’s Concerto in B-flat Major, Op. 6, No. 7, began the concert with striking emphasis on the viola and the lower notes of the violins, and ended in a sprightly hornpipe.

Ending the concert was Corelli’s Concerto Grosso in D Major, Op. 6, No. 4. Featured soloists were violinists Kati Kyme and Elizabeth Blumenstock and cellist Shirley Hunt. These people can play really fast, and they ended in a blaze of glory.

Kirsten Blaise joined the instrumentalists for a final bow.