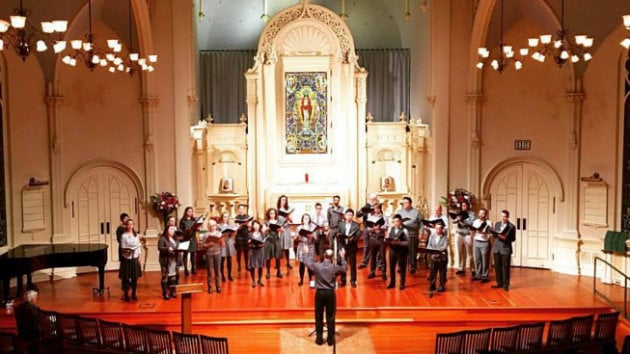 Amy Beth Kirsten is a new name to look out for in contemporary music. While the 43-year-old composer and librettist has had commissions from eighth blackbird, among other new music ensembles, she has yet to make it “big.” However, her work is certainly worthy of recognition.

Following a successful 2007 residency with San Francisco’s Volti ensemble, Kirsten again teamed up with the choir this past weekend at San Francisco’s St. Mark Lutheran Church for the world premiere of her latest vocal work, It is possible these things do not exist:, which showed off her talent as both a composer and a poet.

For her new work, Kirsten took as her inspiration the 1973 short story “The Ones Who Walk Away from Omelas” by American author Ursula Le Guin. Le Guin’s story describes the utopian city of Omelas, which hides a dark secret — its very existence is maintained by the misery of a child locked away beneath the city. The people of Omelas are aware of the child’s existence, yet do nothing about it, in order to secure their prosperity.

In her introduction to It is possible at the Nov. 8 concert, Kirsten explained that in writing the text for her work, she was attempting to enter the mind of the imaginary citizens of Omelas and express their thoughts both musically and poetically. This manifested in what she called “parallel dialogues.” The sopranos sang the main text of Kirsten’s poetic reduction of the story in a largely triadic musical language, echoed by whispers from the tenors. Simultaneously, the basses and altos obsessively repeated the phrase “too much to bear” in a competing and ever-fluctuating tempo that necessitated a secondary conductor in addition to music director Robert Geary. Volti expertly pulled off this virtuosic feat of asynchronization, resulting in an unsettling depiction of the moral dilemma faced by the people of Omelas.

This parallel dialogue was one of many quasi-theatrical gestures Kirsten employed in It is possible, revealing her keen interest in avant-garde theater. As the piece progressed, a handful of individual singers turned their backs to the audience in a staged act of defiance meant to represent the few citizens of Omelas who choose to leave the city in protest. Semantically meaningless phonemes are divided by long stretches of silence, which take on as great a role as sound in Kirsten’s compositional style.

Kirsten also takes an unorthodox approach to text setting, which can be quite expressive. Musical lines enter and are suddenly cut short, sometimes mid-phrase or even mid-word. Semantically meaningless phonemes are divided by long stretches of silence, which take on as great a role as sound in Kirsten’s compositional style. Likely for these reasons, the text of all the pieces on the program were recited beforehand by San Francisco lawyer Richard J. Collier, a former Berkeley English professor.

Followinga performance of Kirsten’s 2006 Volti commission In the Black, was Lithuanian composer Žibuoklė Martinaitytė’s 2010 The Blue of Distance. Like Kirsten, Martinaitytė turned to prose for inspiration — San Francisco author Rebecca Solnit’s 2005 book A Field Guide to Getting Lost. However, instead of fashioning a text, Martinaitytė utilized only vowel sounds and other vocal “noises,” much in the same vein as Kirsten’s broken-up words.

The Blue of Distance opens with the chorus humming a dreamy cluster chord at pppp — a nearly impossible feat for any other choir, but executed beautifully by Volti. Consonants and pure vowels began to emerge with new, slowly shifting harmonies. The piece consists mainly of static chords, though with some touches of Eastern European-sounding melodies. The main source of interest is the various timbral effects achieved through extended vocal techniques, such as ululation and pinching the nose in order to create an ethereal tone color reminiscent of throat singing.

While harmonies would build up, organ-like, there was never a firm sense of arrival, resulting in a continuous feeling of remoteness or unattainability. An excerpt from Solnit’s book reveals the likely inspiration for this aesthetic quality: “Blue is the color of longing for the distances you never arrive in, for the blue world….” St. Mark’s Church was an ideal venue for the work, then, as its ceiling is painted a gentle Himmelblau with tiny dark-blue stars above the altar.

Unfortunately, the works on the second half of the program didn’t measure up to the standard set by Kirsten and Martinaitytė. Stacy Garrop’s 2011 Songs of Lowly Life was a slightly melodramatic setting of three sentimental poems by turn-of-the-century poet Paul Laurence Dunbar. The third poem, “Old,” required the singers to execute odd bitonalities that simply sounded out of tune rather than interesting. Geary had to restart the opening of the movement after an unsuccessful attempt by the choir.

Forrest Pierce’s 2013 Gratitude Sutra fared little better. Its text by Gary Snyder, based on a Mohawk prayer, was a kind of St. Francis canticle mixed with 1970s New Age wisdom. The seven-part expression of gratitude to Mother Earth, Plants, Air, and other natural entities provided a range of opportunities for stereotyped word-painting on Pierce’s part. While the work suffered from an over-reliance on cheesy, pop-inspired harmonies, there were some interesting portions where the main sung text was accompanied by a mesmerizing, mantra-like repetition of the word “gratitude.” Still, it was a bit surprising to hear that Gratitude Sutra was being recorded for a future Volti album — Kirsten and Martinaitytė’s pieces would have made better choices.