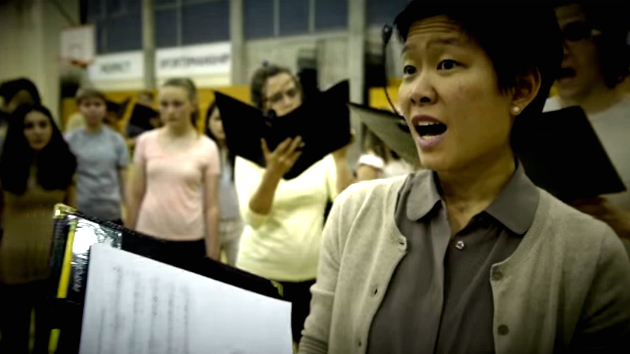 Two years in the making, the journey that is Pandora’s Gift has come to an end for vocal ensemble Volti, Artistic Director Robert Geary, and longtime composer-in-residence Mark Winges. Its final destination was an attractive melding of poetry, music, choreography, and stage design, performed last weekend at San Francisco’s Z Space, together with an ensemble from the Piedmont East Bay Children’s Choir.

The journey started with Geary’s idea to have Winges compose a piece for chorus that would include movement on the part of the singers. Winges, who suggested the Greek myth of Pandora as a theme, felt strongly that the movement would not be artificially attached to the music afterwards. Instead, he wanted the action to emerge naturally from the storyline and develop in conjunction with his own creative process as a composer.

The combined creative energy of the team led to an interesting study into the marriage of music, movement, and space, an integration of the literary, visual, and performing arts that resulted in a form of musical theater that is, in the words of Volti Executive Director Barbara Heroux, “a different kind of animal”.

It is definitely a spectacle that is hard to do justice by way of the written word.

Pandora’s Gift is conceived in three movements: “Dawn”, “All Hell,” and “Hope”, and on stage, each one is accentuated by a different lighting concept.

Visually speaking, Pandora’s Gift yielded images that will linger in my memory for some time: Geary, who as conductor actively participates in the choreography, following his music stand around the stage as it changes position almost unnoticed, transported by magic hands from within the chorus. We also see him in a line of Volti singers and Piedmont choir members, keeping the two groups separate with broad conducting gestures that are mirrored by the singers.

In Shuch’s flowing direction, the singers translated the agonies of Hell into frantic pacing; they cleansed or blessed themselves with magical rubbing motions, swirled around until they all gathered in a group for a more intensely choral passage, and swayed their bodies like tall grass in the wind. The director even seamlessly integrated the handling of scores when the music called for it.

What distracted from the performance was the intrusive hum from Z-Space’s air-conditioning system. According to at least one audience member farther back in the auditorium, the noise interfered with his enjoyment of the music.

Greater familiarity with the libretto would have deepened the experience of Pandora’s Gift, but part of the text’s symbolism, and its correlation to the choreography was lost since it was too dark to read (or take legible notes) - and the audience’s eyes and attention should be directed towards the stage anyway.

In this respect, the mini-interviews with composers L.J. White and Ryan Brown, held before their world premieres at the beginning of the concert, were insightful and illustrative. Both composers were chosen for Volti’s 2014-15 Choral Arts Laboratory, an annual commissioning and residency program that started in 2003.

White’s piece, Digression on Number. 1, 1948, is a compelling setting of Frank O’Hara’s poem, inspired by a Jackson Pollock painting. Her composition is three-dimensional: The singers are positioned at arm’s length from each other and they use spoken word, noises, vocal swoops, squeaks, giggles, whispers, and whistling to create depth and musical texture. With interweaving snippets of melody that gradually detach, get re-acquainted, and thicken into phrases, she generates an evocative form of sonic architecture.

Brown took a more linear approach to the construction of his sound sculpture. He found inspiration in a book called Mortal Lessons: Notes on the Art of Surgery by Dr. Richard Selzer — “…a collection of short essays drawn from his experiences as a surgeon, but written in a really beautiful, mysterious, and poetic style,” Brown says in the program notes.

His hypnotic composition, Bones, is built around an irregular central pulse. A dragging repetition of the word “bones” becomes an elongated trail that is marked by casually dropped words, or a sudden exuberant eruption of “Glory! Glory! Glory!”, only to return to an atmosphere of intimacy and minimalism.