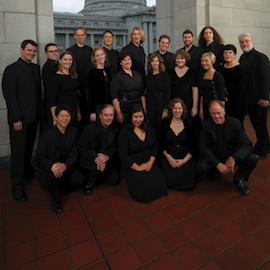 A few years has passed since last I heard Volti. Saturday’s concert, “Britten and Beyond,” conducted by Artistic Director Robert Geary and performed for a small audience at San Francisco’s St. Mark’s Lutheran Church, featured well-chosen, unaccompanied music by Sarah Snider, Forrest Pierce, Mark Winges, and Benjamin Britten, but both the chorus’s stage presence and its singing were slightly underwhelming.

Composer Mark Winges has a long association with Volti, and the world premiere of his All Night, a Volti commission, brought no real surprises in the context of his compositional output. The outer movements were, especially, pure Winges: deconstructed, syllabic interjections in pointillist, close intervals plodding on after a slow, quarter-note pulse. In spoken remarks, the composer remarked on the profound influence of poetry, but this style seems to obscure text rather than distill it. More interesting was the opening of the middle movement, “Provençal Night,” when he plowed through the text rather than extending it, allowing the audience to hear phrases. Although Winges is secure in his style, I would challenge him to avoid some of his patented gestures.

Both Britten’s Sacred and Profane and Sarah Snider’s Scenes from “Unremembered” were commissioned by one-on-a-part, virtuosic, vocal ensembles. Volti did not adapt its more traditional choral approach to the musical conception of these works.

To be clear: the group sounds good, and has a very strong sense of choral blend and style. Especially notable is the dynamic contrast. The individual voices, however, are rarely solo-quality and fully mature; this shows through subtly in the overall tone. A slight lack of confidence, seen in the cautious holding of sheet music and shifting eye contact, translates into sound. Slight flaws in vocal technique lead to vocal fatigue, and as the concert went on, minor problems in tuning crept in.

Snider’s work was especially fresh, with a “downtown” jive feel. Composed for an octet named Roomful of Teeth, it begs for more in-your-face expression and a pop sensibility that were not in evidence in this performance; singers who own the stage attract and hold audiences.

Taking a text from poet Nathaniel Bellows, several of the movements have an accompaniment-soloist texture. This worked well in “The River,” but less well in “The Orchard,” which felt like a tortured attempt at orchestration without instruments. Snider was especially successful at lengthening short bits of text for emphasis and form, and I never felt her use of text was gratuitous. One disappointment was the finale, which petered out where the text beckoned for something more exuberant. The audience didn’t recognize when the piece had ended.

Although Sacred and Profane is one of Britten’s harder works, Volti made the music sound harder than it is. Some of the easier movements, such as “Lenten is come,” received too labored a performance. Due to the work’s one-on-a part origin, its texture is very thick, but the way to deal with this is through good declamation. Geary’s overactive conducting did not help the singers here.

Although brief, Forrest Pierce’s Monument was a captivating gem, evoking an appropriate mood from a well-chosen poem by William Stafford. Shifting modal chords evoked a sense of wide open spaces. Volti has commissioned a new work from Pierce: I look forward to hearing more from this composer.