Playing string quartets once was no one's full-time job. The professional string quartet whose players spend essentially all their professional time concertizing, recording, or teaching as a quartet is a historically recent development. All the same, it's now so firmly established a pattern that such part-time ensembles as there are look almost like second-rate substitutes for the "real thing."
How can any four people get together after a gap of months and play with the refined ensemble of a foursome that practices together daily for years on end? Even first-rank soloists, who a couple of generations ago would have performed in quartets almost as a matter of course, tend to be shy about it now, leaving much of the finest music ever written for their instruments to the real pros, the specialists who play nothing else. 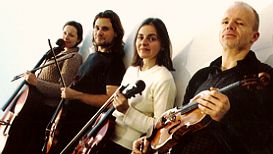 It's heartening, then, to see a few ensembles bucking the trend. Not long ago, for example, the violist Tabea Zimmermann, the cellist Jean-Guihen Queyras, and two violinists with lesser but still substantial careers as soloists took the plunge and formed the magnificent Arcanto Quartet. But the best-known such ensemble is still the Zehetmair Quartet, founded in 1994 by the well-established violin soloist Thomas Zehetmair and three colleagues: violinist Kuba Jakowicz, violist Ruth Killius, and cellist Ursula Smith. The Zehetmairs have maintained an interpretive reputation equal to that of the top full-time quartets by keeping their repertoire small, select, and interesting (they rehearse and tour with only one program a year), and by recording bits of it at odd intervals for the ECM label.

Sunday's Cal Performances-sponsored visit to UC Berkeley's Hertz Hall afforded those of us impressed by the Zehetmairs on record a tantalizing chance to hear them live. It was a brief but compulsively fascinating recital by a singularly weird, wonderful, and sometimes worrisome ensemble.

Weird? Yes. The Zehetmairs have, for one thing, a distinctly strange tonal palette. They use a terrific amount of bow, and often almost no pressure, seeming to rely a great deal on the acoustic's carrying and smoothing out their sound. Great swaths of Sunday's program were almost more sketched than played. Not that the quartet is shy about playing grittily or roughly — in fact, the players are, if anything, a little too fond of the characteristic sound of bows bottoming-out on the string. But the ordinary dense, centered, in-the-string sound that is most good string players' default setting appears in their playing almost in the character of a rare special effect. They turn the usual repertoire of string colors oddly inside-out.

It is not the sort of playing you'd expect from a quartet led by a man who's spent much of his career as a top-level concerto soloist. Star soloists can get away with skating over the surface of the string as an occasional effect, but never as a basic sound: Your first priority has to be making yourself heard over an orchestra, and this is not the way to do it.

Maybe Zehetmair is drawn to this kind of sound precisely because it's a color he can't generally use on the concerto circuit. If so, he's certainly found three exceptional, like-minded musicians with which to explore it. Jakowicz, Killius, and Smith matched Zehetmair's finicky sound uncannily well, with Smith's deceptively soft-spoken cello version being the most unusual.
Rhythmic Point-Making
The quartet's other obvious peculiarity is its attitude toward inflection, particularly rhythmic inflection. The Zehetmairs are fantastically liberal with rubato. In fast, driven music, like the second and fourth movements of the Schumann First Quartet that ended Sunday's program, they do keep to a rhythmic groove. But in anything less musically single-minded, they seize every chance the music affords for rumination or point-making (and occasionally some that the music honestly doesn't).

It's natural to connect this extraordinary mutability of tempo to the quartet's playing from memory. Surely that has something to do with it — not necessarily because the Zehetmairs know their own (and one another's) parts better than other good quartets do, but because in the absence of printed parts the music in your head is somehow more yours to mess around with. (Not having to peer over your own and other people's stands in order to communicate visually with your colleagues doesn't hurt, either.) Still, other chamber ensembles that play from memory — there are some — don't go to town with rhythmic inflection to this extent. I suspect that the Zehetmairs' decision to forgo printed music is a consequence of their interpretive personality, rather than the cause of it.

The rhythmic freedom comes together with similar indulgences in the matter of dynamics, articulation, balance, and so on. If you are inclined to like this sort of thing, you call it "interpretive generosity." I do happen to like it, but even I couldn't help remembering Sunday that its less charitable name is "mannerism."

The quartet's evident maxim is that most music will stand a great deal more interpreting than it usually gets. I tend to agree, but the early Mozart quartet (K. 156) that opened the concert is not the example with which I would have chosen to make that case. By the time the Zehetmairs had done with it, the poor little thing had been pushed, pulled, inflected, and stage-directed into oblivion. The second movement was almost comic: a slight, minor-mode interlude overlaid with earnest intensity and high drama as though the players regarded it as close kin to the slow movement of Beethoven's First Quartet. But the outer movements were almost as silly, both so bristling with brilliantly made points that the shape beneath was almost indistinguishable.

What made it maddening was that some of the points were seriously good ones. Little details of voice-leading and texture, for example, got loving attention, the kind that can make something extraordinary out of even a slender piece like this one. And occasionally the quartet would hit just the right character for something and actually stick with it for some bars. (The Trio of the concluding Tempo di Menuetto — smooth, deadpan, and a little faster than the main part of the movement — was one of those places.) But the piling-on of interpretive detail was altogether too much. The piece was loved to death.

The rest of the program proved much better suited to the Zehetmair treatment. Paul Hindemith's music of the 1920s has turned out to respond unexpectedly well to interpretive approaches far from his own. In the case of the 1921 Quartet Op. 22 ("No. 3" in the old numbering, but renumbered 4 late in the last century when the withdrawn Op. 2 Quartet came into circulation), we have the best possible evidence as to how the composer expected the music to go: the Amar Quartet's mid-1920s recording, in which Hindemith was the violist. That performance is rough (sometimes brutal), steady, purposeful, motoric. Subsequent performances — this is deservedly the most popular of the Hindemith quartets, and gets played fairly frequently — have tended to follow the composer's lead.
The Machine Is Alive
The Zehetmair Quartet took a different tack. It lit into the most ferocious passages as furiously as any. Elsewhere, though, there was surprising sweetness of tone, feathery delicacy of articulation, and much play with string color. Things like the thrumming pizzicato pulse underlying the central third movement or the eerie ensemble trills at the end of the last achieved a whispered intensity. And throughout was that ceaseless mutability of pulse, that constantly questing, exploratory sense of rhythm. If most players of 1920s Hindemith (including the composer himself) contrive to suggest the working of a fantastic machine, the Zehetmairs' Op. 22 was unquestionably, disquietingly alive.

Schumann's First Quartet, too, emerged with a strange, new sense of volition in it. Schumann's three quartets are the only chamber music he composed that doesn't involve the piano, and something in the lack of a central, harmony-directing persona can make them seem a little directionless. A quartet doesn't naturally bend to the extent a pianist can, certainly not as much as a pianist ordinarily would in Schumann.

Except that the Zehetmairs can, and did. The first movement had an almost improvisatory manner to it. The slow movement, that notorious textural embarrassment (why did Schumann not just stamp the viola part "pianist's left hand" and be done with it?), for once seemed to ebb and flow naturally. The two fast movements, meanwhile, were virtuosic in a boldly reckless vein, as though the players were daring something to fly off the rails.

And the curious, drone-underlaid interlude in the last movement, just before the end, was breathtaking: a dead stop, that rudimentary little tune issuing as though from an immense distance, a small, still chorale, and then one great jubilant rush back into the Presto tempo and the music's final pages. The entire performance was a lesson in ground-level belief in a piece winning through performance. The Zehetmairs have found the trick of making this particular quartet live.

Their encore, characteristically offbeat (not to say dead obscure), was the Scherzo of Anton Bruckner's early (1862) C-Minor String Quartet. I doubt anyone in the audience would have known it for Bruckner if Zehetmair hadn't announced it; I think I would have guessed early Schubert, from the uneasy mix of Mozartean cadential gestures and not-quite-successful chromatic excursions. The Zehetmairs, playing more straightforwardly than they had all evening, made a delightfully droll thing of it.