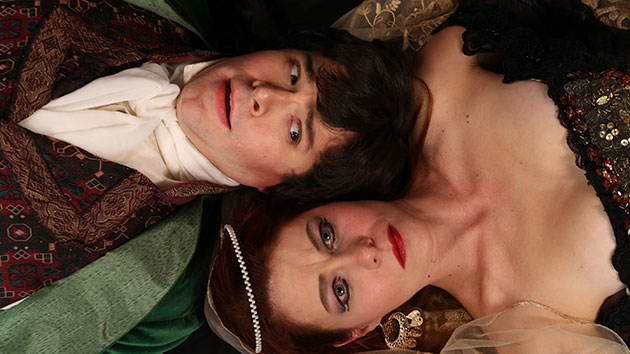 In its dazzling rush of arias and ensembles, grief and mischief, agony and delight, the second act of The Abduction from the Seraglio opens a clear vista to all that Mozart would achieve in his operatic masterpieces to come. Even in this 1782 work, written when the composer was 26, the invention and emotional expressiveness, wit, and sheer, flowing generosity are largely in place.

It may not be a great opera overall – some listeners may hear it as a kind of light-footed trial run for The Magic Flute – but it’s shot through with the kind of greatness that’s unmistakably Mozart. Two act-crowning quartets alone are reason enough to see and hear the piece first-hand.

In their first production of the work in the company’s 59-year history, West Bay Opera has mounted a lively and entertaining if musically erratic Die Entführung aus dem Serail. Sung and spoken in German with sometimes puckish English titles (“What the heck,” goes one line), this Abduction continues through Feb. 22 at Palo Alto’s amenably snug Lucie Stern Theatre.

The result is both worthy and well-judged. With its proto-feminist libretto, by Christoph Friedrich Bretzner, the opera reflects the seemingly timeless themes of Christian individualism in conflict with traditional Muslim values and customs. Resolved with an act of mercy by the story’s powerful Pasha, Abduction reminds us to look past ingrained prejudices and presumptions. In today’s terror-riven politics of division, that’s a particularly harmonious and welcome message.

The West Bay production boasts various strengths. It’s handsome to look at, with Callie Floor’s Ottoman Empire costumes supplying both the sensuality and exotic strangeness of that 18th-century realm. In his directing debut, Eugene Brancoveanu, who also plays the role of the Pasha, finds the right concoction of spry humor and swirling passions this tale of romantic love and clashing cultures invites.

Eugene Brancoveanu … finds the right concoction of spry humor and swirling passions this tale of romantic love and clashing cultures invites.In another auspicious debut, bass Kevin Thompson turns his first West Bay outing into a triumph as the menacing and propulsively funny Turkish body guard Osmin. From the moment he makes his first ominous entrance from the back of the house, Thompson uses the burnished thunder of his voice and quick-trigger temper to create a memorable portrayal. His towering height only adds to the dominant impression he makes as the opera’s comic villain.

Soprano Nikki Einfeld, another of four singers in the cast new to the company, brings a bright if somewhat mechanical shine to the role of Konstanze, one of two Western women who have been taken captive by the Pasha, awaiting rescue by their bumbling tenor lovers. Einfeld comes off as a slightly static object of desire – in Brancoveanu’s amusing touch, the Pasha’s fond of painting her arms and ankles as if she were a statue – but her coloratura turns are both accurate and dexterous. In one vocally athletic third-act aria, she channels the Queen of the Night.

The singing falls off from there. Michael Desnoyers is colorless and technically challenged as Konstanze’s Spanish suitor Belmonte. Chelsea Hollow and Tapan Bhat have some energetic moments as the story’s second set of lovers, with the soprano particularly ebullient in her prancing taunt of Osmin. But neither the parts nor the performances prove very expansive.

Conductor José Luis Moscovich supplied firm control of the proceedings from the pit at Sunday afternoon’s performance. The coordination of singers and the orchestra was admirable. The orchestral playing itself, especially in some patchy readings of the rapid string passages, left something to be desired.

This Abduction is often at its best in the ensembles. The blending of forces blur the shortcomings of the individual singers. Brancoveanu’s clever directorial stylizations help. Staged as a kind of elaborate contradance, the final quartet for the four liberated lovers is simultaneously elegant, winsome, and moving. The couples’ final departure, celebrated by a chorus decked out in lofty Turkish hats, makes for an audience-pleasing coup de théâtre.

Some of the smaller touches are just as pleasing in their way. A pair of harem girls give their bodies to the cause to unfurl a red carpet. The two tenors pick their way through a courtyard full of restlessly sleeping (and restively amorous) Turks. And then there’s the chess game that ends with an enraged Osmin biting off one of the piece’s heads.

That gives a refreshing new life to the sin of chewing the scenery. Thompson, as he does everything else in his show-stealing turn, chomps down with gusto.