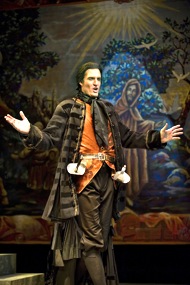 If no weapons are involved, next time I am facing a gang in a dark alley, I want Gabriel Manro on my side. The young, lanky baritone would need only sing “Morir! Tremenda cosa!” (Die! Darn it!) and all the bad guys would run away, presto.

Making his debut here, in the West Bay Opera’s sensational production of Verdi’s La Forza del Destino, Manro is a new kind of baritone: not lyric, not helden, not Kavalier, not Bariton-Martin — none of those. Rather, he’s a knock-down baritone.

In Sunday’s matinee at the Lucie Stern Theatre in Palo Alto, his was an exciting debut of intensity and power, making the still-lacking musical finesse almost immaterial. In the role of the demented Don Carlo (whose only purpose in life is to find and murder his sister and her supposed lover), Manro burns up the stage, making at least this part of Francesco Maria Piave’s preposterous libretto believable.

Next weekend’s performances will be your sole chance to witness this debut, along with many other wonders, because as good as Manro was Sunday, he was only one of a terrific ensemble of outstanding singers.

Olga Chernisheva’s Leonora was equally remarkable: a big, rich, dark voice from a small frame; producing legato-within-legato (bright colors in the voice even as notes are connected seamlessly); an appealing stage presence; and a sincere and effective believer in the work. 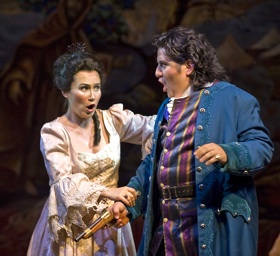 This Ivanovo-born, Moscow-raised 2002 Merolina was impressive in the title role of West Bay Opera’s 2006 Manon Lescaut, but she has now grown beyond that high standard.

Let’s face it, believing in this story and in these characters is a daunting task: Forza is a super-lame melodrama, on the order of The Drunkard, though not intentionally funny as the latter is.

From the central plot point of death by a bullet from a pistol thrown to the ground (coming about from Leonore’s playing Hamlet instead of running away), to the mysterious coming together of key characters, to the violation of an oath on technical grounds, to waves of gratuitous and even more than Parsifal-pompous religiosity, to the extravagant triple tragedy of the finale — this is not an opera easy to make stick. West Bay Opera does.

The only unsurprising thing about José Luis Moscovich’s company is that it always surprises. It’s almost tiresome to write time and again about “tiny outfit’s grand production,” but West Bay has done it once more. 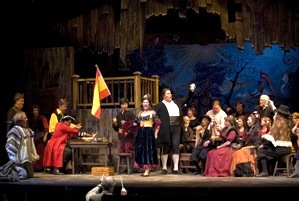 There is also history at work here. From the founding music director, Henry Holt, half a century ago, through Maria Holt’s 28-year-long and then David Sloss’ seven-year-long intendancies, to Moscovich’s present and future, it’s been “the little company that can, and does.”

Michel Singher (son of the late baritone Martial Singher) conducted the small orchestra in a tight, consistent performance, although initially hampered by an unusual, metallic overtone that sounded like electronic feedback. It was a rare hiccup from sound designer Tod Nixon.

Outstanding work came from the woodwinds, which are so important in this score, especially Peter Lemberg (oboe), Roman Fushansky and Susan Macy (clarinet), and Amy Duxbury (bassoon).

Once again, David F. Ostwald directed in an effective and straightforward fashion, using Jean-François Revon’s effective sets on a miniature stage. One mild objection: Spotlighting themes of the story on an upstage tapestry as the story turns is on the too-cute side, yet possible to ignore. The way the stage-wide tapestry recedes into the distance between the overture and the beginning of Act 1 is the kind of staging opera-goers might expect from a major company with an actual budget to pay for special effects.

Bruce Olstad’s small but powerful chorus (except in off-stage portions) was impressive, along with the supernumeraries, plus the Ragazzi Boys’ Chorus. I can never figure out how West Bay manages to get so many bodies on the stage, not to mention moving them around in an orderly fashion.