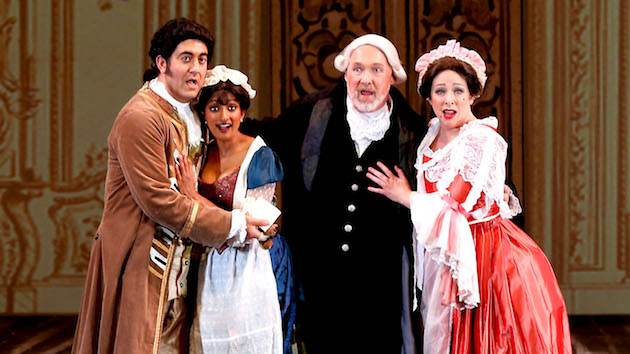 Ambitious West Bay Opera opened a 61st season with Le Nozze di Figaro last weekend. While the performance was gripping, it was not always for the right reasons, despite quite a fine cast and a lively production, directed by Igor Vieira.

This brave little company is also putting on a world premiere, Il Trittico, and Salome in the year to come, but Figaro might be the most demanding of the bunch. With Mozart, all the seams show, and mistakes are obvious. Unfortunately, there were a lot of problems during the Sunday matinee, starting with the overture, which was clearly not together and not in tune.

The pit at Lucie Stern Theatre is small, and not all of the musicians fit. This is most problematic for the harpsichord, which seemed to be offstage and invisible to the singers. It is possible that the harpsichord and singers were not synchronized even once during the entire opera.

The orchestra did sound energetic under the leadership of Jose Luis Moscovich, but often ran ahead of the singers, and missed cues here and there. Act II was particularly sloppy: The singers would try their best to watch the conductor, but for most part to no avail. The duet between Susanna and Cherubino, “Aprite, presto, aprite,” nearly fell apart, as did the beginning of the finale ("Esci omai, garzon malnato.") Somehow Moscovich was able to pull everyone back together for the end of Act II, and there was a moment or two of sublime unison.

Moscovich also launched Act IV early while the curtain was still down for a set change, and there was an awkward pause as the audience waited for them to begin again when everything was ready.

Much of the singing and acting was great, despite all the mishaps of timing. In the bigger roles, only soprano Stacey Stofferahn disappointed as Countess Almaviva. Her voice is piercing and was unpleasant in her two big arias. Interestingly she sounded better at other times, as in her duet with Susanna “Sull'aria ... che soave zeffiretto” in Act III. Baritone Krassen Karagiozov had a slow start too, but warmed up, and his Count Almaviva was suitably brash and robust. 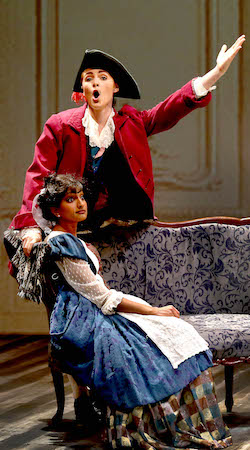 Two singers made their West Bay Opera debuts and both were strong. Mezzo Veronica Jensen looks wonderfully boyish as Cherubino, and her girlish voice was especially lovely in “Voi che sapete,” one of the only bright spots in Act II. Best of all may have been soprano Maya Kherani as Susanna. Her bright tones sparkled throughout the opera, and “Deh vieni, non tardar” in Act IV was delightful.

Kherani had great chemistry with her Figaro, Isaiah Musik-Ayala. Their sense of timing of the physical humor was spot on and very funny. Musik-Ayala's low notes are resonant and he made the role seem easy, quite a feat given how chaotic the performance was.

Carolyn Bacon was a sweet Barbarina, with a pretty vibrato in her Act IV aria. Kirl Havezov and Carmello Tringali were surprisingly winsome as Antonio and Basilio, and were coupled up in a hilarious way at the very end of the opera. Michelle Rice (Marcellina) and Silas Elash (Bartolo) also made an adorable pair, Rice was ridiculously excited during the Act III double wedding and her joy was irresistible.

I was most impressed that the singers were able to maintain their composure throughout, I myself was barely able to. It certainly made La folle journée, ou le Mariage de Figaro ("The Mad Day, or The Marriage of Figaro") — the original title of the Beaumarchais play — all too apt. 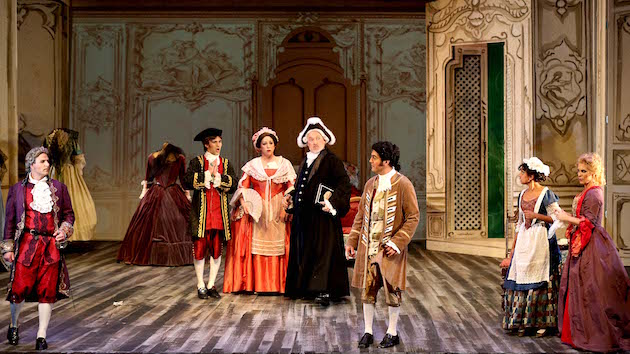