How do you produce a Wagner opera on a stage not much bigger than a living room?
How do you present a "Wagnerian" (in fact and in size) score with an orchestra whose string section consists of six violins, two violas, two cellos, and a double bass?

The expected response of "very carefully" doesn't apply in the case of West Bay Opera's production of Der fliegende Holländer; the correct description is "amazingly well." 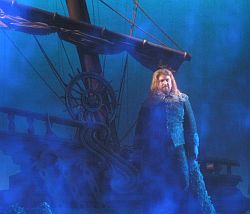 The Dutchman appears (Bryan Glenn Davis, from the other cast)

All photos by Lucinda Surber

In title, advertising, and text, it's all Holländer, rather than The Flying Dutchman. The choice was proven correct by all-around excellent German (Lea Frey, diction coach) and supported with clear, well-timed English supertitles by WBO General Director José Luis Moscovich and Stan Ulrich. (But couldn't we do without the "pale guy" reference?)

Top credit for the heroic effort that has produced a musically and theatrically cogent and affecting performance (seen at the Sunday matinee of the double-cast production) goes to Moscovich for musical direction, Peter Crompton for set design (with lighting director Chad Bonaker's eerily effective video component), Douglas Nagel for singing extraordinarily well in the title role, and Paula Goodman Wilder for a strikingly powerful Senta. 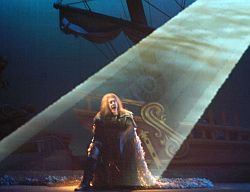 Douglas Nagel, as the Dutchman, in the illumination of the hoped-for redemption

Having selected a cast that came through with high marks, Moscovich marshaled his meager orchestral forces (thin strings bolstered by eight busy woodwinds and seven reliable brass instruments) so that tempo, balance, phrasing, and the support for singers were remarkably consistent throughout the performance.

"True Wagnerites," allergic as they are to any audience participation or interference, might have gone apoplectic when the full house erupted in applause ... for the sets. (Not to mention several rounds of snobs-offending applause for what the misinformed considered to be "arias," tsk, tsk.) But here's the strange thing: Wincing as I was at the applause for the scenery, I was mentally joining the celebration. 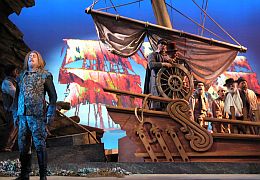 The Dutchman (Nagel) and Daland's crew

Crompton — supported by Chad Bonaker's bold lighting, Callie Floor's imaginative costumes, and an unusually large production staff — came up with a more impressive design than might be imagined under such space- and budget-confining circumstances. Projection of ocean waves during the overture yielded to a picture behind the scrim that also appeared to be projected — until the scrim disappeared, and there stood a main mast above the steering wheel, Daland's ship moored on a craggy shore.

The Dutchman's ship was a projected but realistic phantom image, the Dutchman rising from below the stage, with the scrim once again helping to create an image that smoothly dissolved into "reality." During his first aria, the spotlight for the Dutchman transformed into a shaft of shimmering light when he sang of the "angel" he awaited; the same effect was used for Senta, and then for both principals, as the doomed hero found his means to redemption. When action shifted to the spinning room, there too Crompton's design was thoroughly professional and effective, with a Norwegian-appropriate touch of Ibsen. 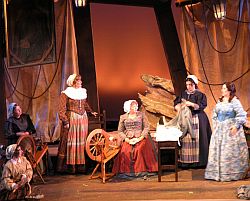 In the spinning room (Wilder, the Senta, in blue dress at right)

Peter Graham's Daland was powerfully sonorous, his characterization of the greedy but paternally protective captain sailing safely through the potential excesses of being a heavy or a buffoon. Omar Gutierrez Crook's Steuermann and Donna Olson's Mary were fine, and Benjamin Bongers' booming Erik was impressive. The Norwegian ship's excessively small chorus sounded, well, small; the offstage chorus was appropriately ghostly.

Best for last: The two principals sang surpassingly well, individually, and — especially — in the Act 2 duet. (West Bay is using the increasingly rare three-act format.) Nagel's self-effacing artistry and Wilder's passionate performance melded so well musically that they provided a true peak moment. David F. Ostwald's direction — acceptable elsewhere — worked against the duet's magic, as Senta moved hither and yon, standing on a chair (?!). And then there was the silly gimmick of the Dutchman's picture on Senta's shawl (in addition to the portrait in the spinning room).

And yet, thanks to Wagner himself, Moscovich, Nagel, Wilder, and Crompton, Palo Alto's Lucie Stern Community Theatre hosted some music-theater magic again in this, West Bay Opera's 52nd season. 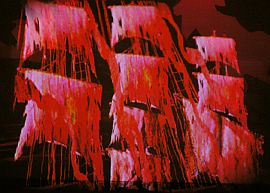 The Dutchman's ship under full sail