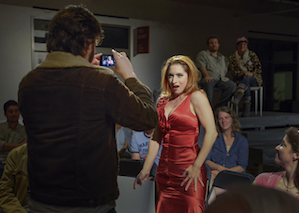 “Invigorating” is not an adjective you would normally associate with Puccini’s tragic tale of love and death in a Parisian garret. But at the Saturday night opening of Mark Streshinsky’s production of La bohème for West Edge Opera, the erosion of boundaries between singers and audience left attendees beaming.

Before the performance began, Streshinsky gave hint of what was to come in the unusually open space and acoustic of Berkeley’s Ed Roberts Campus. After requesting attendees to leave room for singers who would circulate through the audience, he invited us to move around, try hanging over the balcony that framed much of the lower level, and even bring food and drinks to our seats. While at least one audience member crossed the courtesy line in the crinkly aluminum foil-wrapped potato chip department, the freedom for interaction granted to both artists and attendees made for an exceedingly fresh La bohème.

The decision to have one intermission between Acts 2 and 3 also made dramatic sense. Before it came the elation of Christmas Eve love in first bloom; after, the sorrow of dissolution and death. Staged this way, the profound shift in tone as Mimì’s health declines and lovers quarrel drives the power of Puccini’s sweeping melodies deep into the heart. 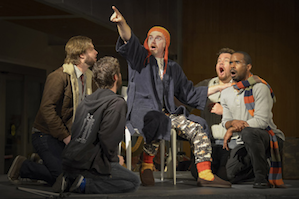 All the bright ideas in the world, however, mean nothing without artists who can drive the point home musically. Here, Streshinsky and conductor Jonathann Khuner’s quartet of principals shone.

In order of appearance, V. Savoy McIlwain’s Marcello was simply superb. Not only is his voice solid, attractive, and beautifully produced throughout the range, but it also allied to a wonderful alive and vital stage presence. Every look, every gesture energized the proceedings and contributed to the musical momentum of the evening. More of this wonderful artist, please!

At his side was the Rodolfo of James Callon. Blessed with a ringing tenor that lacks only for security and strength at the very top of the range, Callon sang with rare beauty, compelling ardor, and, in the great aria, “Che gelida manina” (What a frozen little hand), touching nuance. Who would have expected such a fine tenor in a small regional production? The Rodolfo/Marcello duet at the start of Act 4 — here the second part of Act 2 — vied with Rodolfo and Mimì’s Act 1 duet as the ensemble highlight of the production.

To Mimì, Alexandra Sessler brought an exceptionally endearing, supremely focused, slightly homely sound that brought to mind the classically Italian lyric sopranos of Lucrezia Bori, Licia Albanese, and other memorable Mimìs of earlier generations. All that was lacking was the license to linger on notes and phrases — the unbounded elation and longing as Mimì sings of spring in “Sì, Mi chiamano Mimì” (Yes, they call me Mimi), and the heart-tugging rubato on “Donde lieta uscì” (Once happily leaving) — that are the mark of a great artist. With that extra freedom, and a bit more facial animation and variety of expression, Sessler could go quite far. 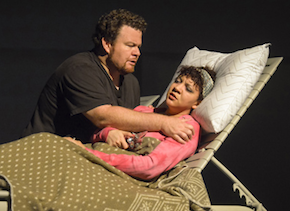 Finally came Christine Capsuto’s sensational Musetta. More than a bit reminiscent of Chita Rivera playing Anita in West Side Story, Capsuto presented not only the hottest, but also the most strongly sung Musetta in memory. If you think it an exaggeration to say that, had someone struck a match on her backside as she seared a path through the opening night audience, the place would have gone up in flames, you had best see for yourself. Not even an advance dousing of flame retardant will protect you from Musetta inviting Colline’s iPhone into the Grand Canyon

Brandon Keith Biggs and Jordan Eldredge may not have brought impeccable vocalism to the smaller parts of Bohemian compatriots Colline and Schaunard, but their individual and collective elation made for an exceptional ensemble. That all this, and the fine contributions of George Arana (Parpignol), Jason Sarten (Alcindoro), Khris Sanchez (Plum Vendor), Chorus, and mainly Piedmont East Bay Children’s Choir member chorus, could be enjoyed close up, before, behind, and around the audience, made for a wonderful evening.

Credit is also due the 11 members of the orchestra, contracted by trumpeter Carole Klein, who made the best case possible for Jonathan Lyness’ orchestral reduction. In this production, at least, the playing rarely if ever felt anemic, because the combination of Streshinsky’s direction, Jeremy Knight’s projection designs, Frédéric O. Boulay’s technical acumen, and the high level of singing propelled Puccini’s tearful melodies right into the heart.