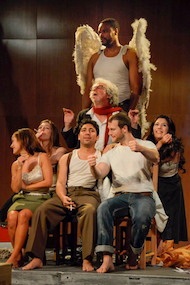 Can the idea of an impending apocalypse somehow alleviate human suffering? The visionary American poet Allen Ginsberg has suggested such a possibility underlies Hydrogen Jukebox (1990), a chamber opera or “melodrama“ that Ginsberg created with the composer Philip Glass. On Friday evening at the Ed Roberts Campus in Berkeley, the West Edge Opera courageously performed this dizzying and dumbfounding piece.

Ginsberg was a “beat poet” whose work expresses the tumult and dynamism of cold-war counterculture. While Glass is also artistically innovative, his music is best known not for tumultuous change but for a repetitive style that is often called “minimalism.” These forces combine to make what Glass has called a “portrait” of America — and the picture looks a lot like history repeating itself until everything catastrophically collapses. The title derives from a line in Ginsberg’s famous Howl: “Listening to the crack of doom on the hydrogen jukebox.” “Hydrogen” connotes an atomic bomb, while “jukebox” represents civilization's military — “a loud industrial roar, or a music that begins to shake the bones and penetrate the nervous system.” 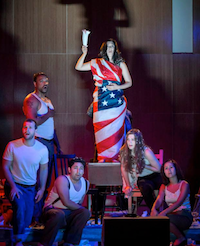 Reasonably, the opening musical number introduced the work’s main themes. The poem on which it is based, Iron Horse, is from a collection titled The Fall of America. Like the first half of Hydrogen Jukebox, it principally concerns the idea of traveling while surveying the devastation (both physical and psychological) of both war and everyday American life. There is mundane illness, drug (ab)use, love-making, and despair. But the seventh and eighth numbers explain that the only true escape is abandoning the U.S. for Bangkok.

The first half culminates with Glass’ setting of Wichita Vortex Sutra (1966). In Ginsberg’s anti-war poem, the protagonist cannot communicate even with sympathetic souls because language has become corroded:

O but how many in their solitude weep aloud like me —
I search for the language
that is also yours —
almost all our language has been taxed by war.


Glass’ setting features a keyboard accompanying Swain, the production’s narrator. While he looked like any grey-haired, scarf-touting hippie who could have been randomly plucked off the streets of Berkeley, his talent is surely rare. 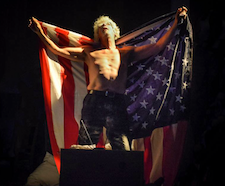 The second half of Hydrogen Jukebox opens with a roar—or, more precisely, a “Howl.” The musical version sets lines 79-93 of Ginsberg’s poem. The passage describes a source of destruction named Moloch. For Ginsberg, this biblical figure represents the worst of contemporary life, notably war, industrialism, and capitalism. Glass pairs this text with an ominously relentless bass and a legitimately howling (albeit in a virtuosic, refined way) tenor saxophone performed by Cory Wright.

The remaining numbers depict the aftermath of both catastrophic destruction and everyday human loss; causes of ruin range from atomic bombing to friends drifting apart over time. These last numbers include the eerily ethereal “Cabin in the Rockies” (featuring Mahoney) and “From Aunt Rose” (featuring Blalock, who is very good in this work, and may just be very good, period). It concludes with an inculcating a cappella chorus, “Father Death Blues.” Duchovnay, who was impressive throughout, here topped the ensemble like a macabre Maraschino. 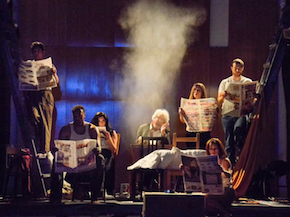 For this concluding number, the uncommonly strophic text of Ginsberg’s poem is particularly amenable to Glass’s repetitive musical style. Thus the haunting melody, resounding like a recurring nightmare, is paired with words such as these:


Like the stillness of death that follows the agony of dying, this unaccompanied number austerely concluded the (hitherto hyper-stimulating) work.

All told, the question remains whether the death and destruction portrayed here on both apocalyptic and individual scales somehow succeeded at easing human suffering. By sheer definition, annihilation does put an end to everything, suffering included. Perhaps, too, the deliberate blurring of the colossal and the personal within Hydrogen Jukebox serves up cold comfort by suggesting we perversely flatter ourselves when we imagine that our own despair, loneliness, or sorrow uniquely characterizes us as individuals. More certainly, while the violence of politics and war may continue to polarize us, the universality of death remains an equalizing force against which, for better or worse, we are always all in it together.