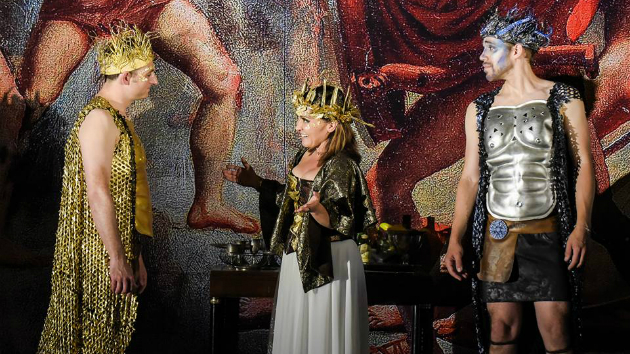 Forever on the lookout for unusual performance locations, West Edge Opera’s general and artistic director Mark Streshinsky found no fewer than three of them, all in Oakland, for the company’s 2015 season, which runs through August 9.

These “unexpected places” for “remarkable operas” (to paraphrase the company’s marketing tagline) are an abandoned train station for Alban Berg’s Lulu, a punk rock club near Jack London Square for Laura Kaminsky’s As One, and a warehouse in West Oakland last Saturday, August 2, for the premiere of Monteverdi’s Ulysses.

Now called American Steel Studios and home to a wide variety of artists and creative industries, the former steel pipe factory was the backdrop for an intriguing performance with a fabulous cast and an imaginative stage design.

“Il ritorno d'Ulisse in patria” (The Return of Ulysses to his Homeland), as the opera is officially titled, dates from 1639-40 and tells the well-known story of the mythological Greek hero Ulysses, king of Ithaca, who returns home after 20 years of absence. He is finally reunited with his son Telemachus and his queen Penelope, who remained faithful in spite of the advances of a band of intrusive suitors, convinced the gods would one day allow her beloved husband to come home.

Ulysses has been called the “ugly duckling” among Monteverdi’s three surviving operas, due to its slow pace and elaborate use of recitativo, in which the protagonists communicate their inner emotional conflicts or discuss — as gods — the fate of certain mortals.

In a wise and clever move, West Edge director Streshinsky decided to condense the opera by dropping a number of characters (mostly gods) not directly relevant to the dramatic narrative; silencing one of them (Melanto, Penelope’s handmaiden — played by Charlotte Goupille-Lebret —  is originally a soprano role); and cutting several scenes and sections.

With a lean instrumental ensemble of five-part strings, harp, theorbo, and harpsichord in the orchestra pit, this Ulysses was a bare-bones, fast-paced, 100-minute production, with the audience seated on three sides of the stage — unfortunately on chairs that were uncomfortably close together. While the seating arrangement allowed the audience to feel like it was part of this immersive production and interact with actors on their way to and from the stage, the seats caused more intimacy than was comfortable. 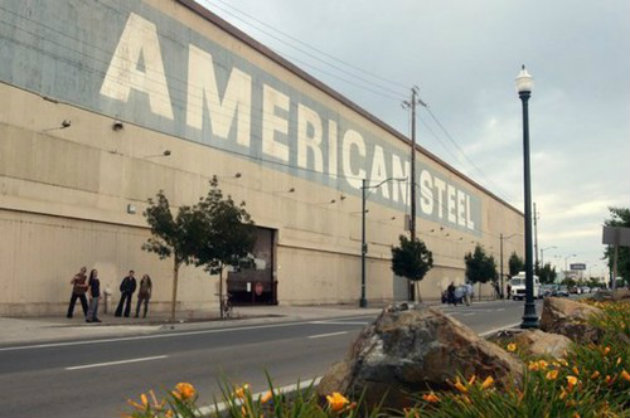 As night fell and the sky darkened outside, the industrial environment of the American Steel Studios turned into a remarkably intimate setting for an opera performance, with increasingly more room for dramatic use of light and other visual effects. The most memorable moment of Streshinsky’s production was without a doubt the glorious entrance of Telemachus, on the back of a scooter driven by Minerva, a gigantic white scarf trailing in the wind behind her.

Musically speaking, this Ulysses was a charm. From the harpsichord, director and early music scholar Gilbert Martinez conducted a nimble and alert group of instrumentalists called “The Monteverdi Ensemble of the West Edge Baroque Orchestra,” but the immense beauty of this production originated first and foremost from the vocal accomplishments of the young and gifted singers on stage.

As Ulysses, baritone Nikolas Nackley was convincing in every stage of his persona, musically evolving from one emotional state to the next. Initially dazed and confused in his duet with the goddess Minerva, sung by the impassioned mezzo-soprano Kindra Scharich; tender and loving as he is reunited with his son Telemachus, a trouser role played by the bright mezzo Johanna Bronk (with remarkably realistic male adolescent body language); and back in control in the final love duet with Penelope, sung by a powerful and determined alto Sara Couden — her own emotions ranging from despair to disbelief to deliverance as the drama unfolds.

Vocally brilliant were the three pompous and lecherous suitors Antinoo (bass Aaron Sørensen), Pisandro (tenor Gary Ruschman) and Anfinomo (tenor Jonathan Smucker), even though both Sørensen and Ruschman left a far less solid impression as Neptune and Jupiter, respectively. The sparkling tenor Michael Desnoyers was Eumete, a shepherd and loyal friend to Ulysses; and comically entertaining was tenor Ted Zoldan as the food-obsessed leech Iro.