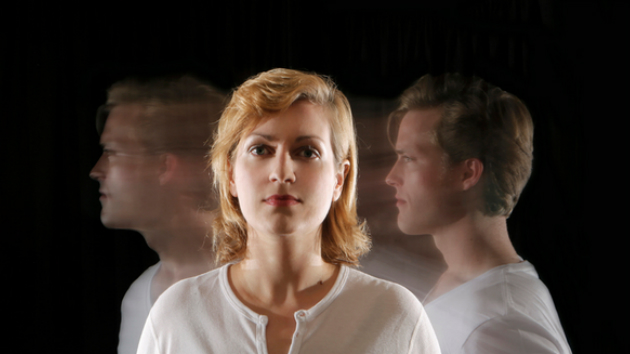 In an iconic moment in Laura Kaminsky’s As One, the young protagonist resolves to be the perfect image of masculinity — “the fastest, the smartest, the strongest, the best” — even as his opposite-stage counterpart tries on heels, a purse, and lipstick. The two struggle, and the boy hurls away these tools of femininity. “No one will ever know, not even me,” he promises himself.

As One — which received its West Coast premiere by West Edge Opera this Sunday at the Oakland Metro — follows the transition of the protagonist, Hannah, to womanhood, with baritone Dan Kempson singing the role of Hannah Before and mezzo-soprano Brenda Patterson singing Hannah After. But these names serve to differentiate between the cast members more than they inform the story. Kempson doesn’t exit the stage halfway through the opera, and there is no dramatic reveal of Hannah After; every scene involves both singers in some capacity, and they are often entwined.

As imagined by co-librettists Mark Campbell and filmmaker Kimberly Reed — who created the accompanying films and whose life experience inspired the opera — the story is a series of recollections in which much of the action unfolds through the hindsight of adulthood. There’s little sense of pacing, but the casual significance of the events portrayed — Sex Ed class, Hannah’s first Christmas alone — more than compensates. The hindsight approach to storytelling also allows for gratifying parallelisms. In one of the opera’s most affecting scenes, young Hannah discovers she is not alone: “There are others,” she sings, “To learn I’m not the only one — the relief, the power.” But after narrowly escaping assault, adult Hannah makes the counter-realization, “There are others — I am not safe.”

When Hannah After struggles with her assailant, however, the recollective style falters. Here, Hannah Before recites in monotone a list of transgender people who have been murdered, a scene the co-creators had described at a panel earlier in the week as their necessary acknowledgment of widespread violence against trans people. Its inclusion is valid, but the delivery feels stilted — who, during a potentially life-ending encounter, has the self-awareness to connect the act to a greater pattern of hate crimes? This recitation is much more effective at the end of the scene, when Hannah uses the internet to learn of murders against trans people. The supernumeraries’ chanting, “Unidentified… Unknown…” is chilling. Campbell and Reed’s libretto, which is refreshingly unsensational under the treatment of director of Mark Streshinsky, was one of the show's greatest strengths.

In all other respects, As One is not a message opera (in fact, the word “transgender” never appears). Campbell and Reed's libretto, which is refreshingly unsensational under the treatment of director Mark Streshinsky, was one of the show's greatest strengths. Many lines are humorous and irreverently self-aware, but others are profoundly touching. In the beginning of the opera, for example, prepubescent Hannah stuffs rolled-up socks down her blouse to mimic breasts — “Other girls are getting theirs, too,” she sings. Later, after Hannah has begun taking hormones, both singers gaze into the mirror and evaluate the reflection: “Close.” Lines like these communicate Hannah’s story more powerfully than does any recitation.

If only the music were as memorable. Kaminsky’s score is pleasant, but only ever moves between two textures — lyrical blues and triadic post-minimalism — and never develops these ideas to their fullest. Though she generally harnesses the power of the string quartet to great effect, the pizzicato passages in “Home for the Holidays” and scales in “Sex Ed” sound amateurish. “Cursive," "Out of Nowhere,” and the instrumental opening of “Entire of Itself” are highlights.

Kaminsky wrote the music of As One for Sasha Cooke and Kelly Markgraf — big shoes to fill — but Kempson and Patterson gave a strong performance. In “Entire of Itself,” Kempson brought staggering pathos to a scene that could have otherwise dragged; his many high passages throughout the show sounded effortless. Patterson’s voice was beautifully rich in “A Christmas Story,” but she excelled in the final scene, delivering lines like “I only care if I pass to myself” with convincing elation. The singers’ performances were especially impressive given the setup of the stage — which rarely afforded them a full view of conductor Bryan Nies — not to mention the stifling temperature of the Oakland Metro.

The Friction Quartet plays this type of music admirably, and first violinist Otis Harriel injected some much-needed brilliancy into Kaminsky’s score. The composer envisioned the viola as the soul of Hannah, and Taija Warbelow played her many solo passages with delightful languor.

The co-creators of As One wanted to create a portable opera, and indeed, the bare-bones production will translate to a variety of venues and budgets. But As One’s real longevity lies in its ability to simultaneously tell a trans story and an everyman’s story. Many of Hannah’s struggles — experiencing alienation, learning to flirt — are universal, and because Campbell, Reed, and Kaminsky smartly tell the story as one of self-acceptance, it appeals to anyone who has undergone change. “Hopefully,” Reed remarked, “we are all transitioning from something our whole lives.”

Note from West Edge Opera: SFCV readers can get a 20% discount on upcoming performances, listed below, by using the code "sfcv."