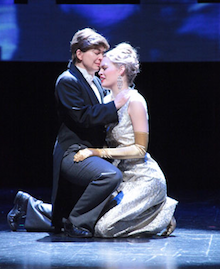 In a few short years, West Edge Opera has earned a reputation as the Bay Area’s most adventurous small opera company. Under General Director Mark Streshinsky, the company scored another hit over the weekend with a new production of L’incoronazione di Poppea (the Coronation of Poppea).

Opera lovers might suppose Monteverdi’s 1643 opera, presented here in the original Italian, an unlikely choice for a company committed to re-imagining classic works for contemporary audiences. Then again, this Baroque masterpiece already seems thoroughly modern, with all the elements — infidelity and illicit sex, dirty politics and power grabs, torture and cross-dressing — for an updated staging.

Directed by Streshinsky, Friday’s performance — the first of three at the El Cerrito Performing Arts Theater — introduced a musically brisk, theatrically vibrant production. This was not a definitive Poppea: Streshinsky and company took many liberties with Monteverdi’s score, cutting characters, scenes, and the chorus, reassigning some characters’ music to others, and reducing the running time to a relatively trim 2-1/2 hours (with intermission). Much was left on the cutting room floor. But, with a fine, fully committed cast under conductor Gilbert Martinez, what remained was a very entertaining version of a well-known work. 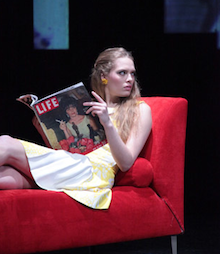 The set was dominated by a giant bed (Lucas Benjaminh Krech designed the scenery, lighting, and projections/video art).

That’s where the audience first glimpsed Nerone (soprano Christine Brandes) and Poppea (soprano Emma McNairy), locked in a sweaty carnal embrace. Other design elements — a red loveseat, and a large screen on the back wall showing loops of crowd scenes, bedroom scenes, scenery, and abstractions — contributed to the atmosphere of modernity while underscoring the opera’s conflict between public and private passions. 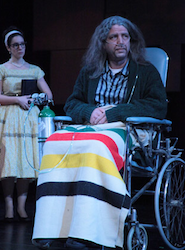 Costumes (by Shannon Maxham) ranged from regal to sexy to broadly comic. Nerone sported pinstripe suits and a tousled, boyish wig that suggested a young JFK; Poppea, dressed in a series of short dresses and brocade gowns, was the impulsive ruler’s golden, girlish trophy.

If the concept occasionally went a little over the top, it was impossible not to be charmed by the singing. With Martinez drawing performances of outsized passion and stylistic allure from the cast, Brandes was the standout, delivering a Nerone of dramatic fervor and generous, gleaming tone.

In this opera, the bad guy gets some of the best music; Brandes made the character suitably evil — petty, vengeful, driven by lust — and she simply dazzled in the role’s florid passagework.

McNairy, who made her West Edge debut last season as Zerbinetta, returned as an alluring, sweet-toned Poppea; she and Brandes made their final duet, “Pur ti miro,” a sublime episode. Countertenor Ryan Belongie was an ardent Ottone, the nobleman who loves Poppea (and nearly murders her, under Ottavia’s orders).  Neff sang attractively as Ottavia, although she failed to make much of an impression with the great lament, “Addio Roma.” 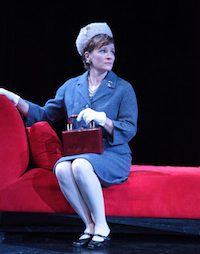 Thorsett offered a lovely, affecting reading of the lullaby “Oblivion soave.” Bass Paul Thompson, though somewhat hampered by a wheelchair and oxygen tank, was a sonorous Seneca, and Tonia D’Amelio was a bright, chirpy Drusilla.

Gilbert, conducting from the harpsichord, led a compact six-piece ensemble that included Baroque double harp and theorbo. In the 600-seat theater, the results occasionally sounded a little thin. But the playing was always vibrant and focused, a good match for Streshinsky’s bold staging.