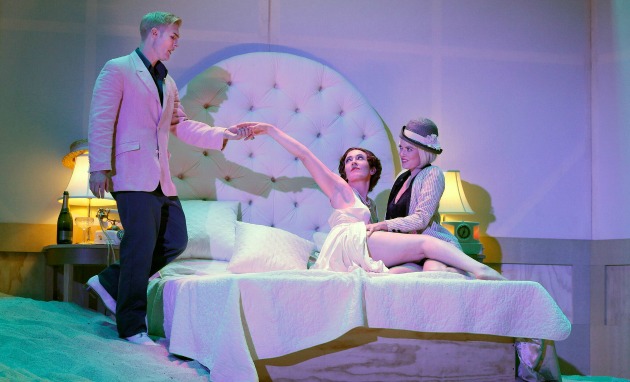 Powder Her Face, British composer Thomas Adès’ 1995 tabloid masterwork, looks and feels right at home in the yawning decrepitude of the abandoned Oakland Train Station, where West Edge Opera has set up camp for the company’s summer season.

Never mind that the acoustics aren’t ideal for this four-singer chamber opera, based on the tawdry and woeful personal resumé of the real-life Duchess of Argyll, Margaret Campbell (1912-1993). What the production may lack in the sort of fetid, claustrophobic intimacy it might have in a less spacious venue, the train station’s despoiled grandeur more than compensates.  The rankness is all.

In fact, what gave and goes on giving this two-act, two-hour-and-20-minute marvel its deserved vitality is Adès brilliantly kinetic score and the resulting dramatic realization of the material.  From the first moments of its brief overture, which sends the music swanning from clattering alarm to tonally rotting tango, this remarkable score is never at rest. By turns caustic and tender, mocking and allusive, bawdy and somber, it fills the existential vacancy of its heroine’s exploits with a careering life force.

Everything about the writing, both for the voices and a gaudily orchestrated band (new music ensemble Earplay in this production), engages and delights. Under conductor Mary Chun’s alert baton, the piece lit up like a tinderbox at Sunday afternoon’s opening performance. The strings chittered, and the woodwinds cawed and blurted. Chimes rang out solemnly. A harp served as a pseudo-serioso motif for the Duchess (soprano Laura Bohn). And lest anyone make the mistake of investing too deeply in all the squalor onstage, everything from fishing reels and electric bells to unctuous saxophones and whoopee-cushion Swannee whistles served notice to enjoy the wild ride.

The action, which circles back from the Duchess’ sorry late days in 1990 to her 1934 marriage to the Duke (bass baritone Hadleigh Adams) and the decades of boredom-driven sexual adventures that followed, gets off to a rousing start. Soprano Emma McNairy, who uses a slatternly impishness and potent, flutey voice to shine in a sequence of supporting roles, is joined by the fine and antic tenor Jonathan Blalock for a predatory romp. 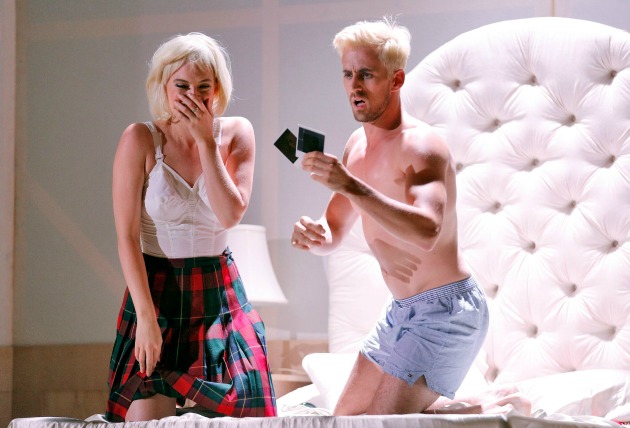 Picking over the Duchess’ sorry possessions when they’re not pawing at each other on the gigantic bed that dominates Chad Owens’ set, they immediately peel away any veneer of respectability that might cling to this picture of the privileged, cosseted classes. Sex, gender, and certainly love are all such a risible farce, complete with door-slamming entrances and exits and pompous posing.

When the Duchess herself arrives and processes grandly forward to the stage apron, designer Ray Oppenheimer lights her from below to give her a ghoulish, hollow-eyed pallor against the lubricious pink light of the hotel room from which she rarely ventures. It’s a pointed and pertinent alienation effect, as are the various onstage wig and costume changes she executes.  For all her free-wheeling ways with others, including that famous, musically heaving oral sex scene with a room service waiter (a cunningly innocent Blalock), the Duchess is firmly and finally a solitary soul, haunted and alone. 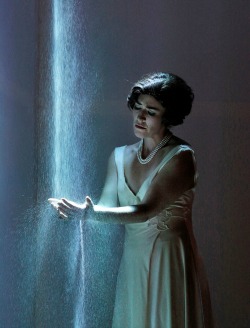 Bohn’s grave, if slightly studied performance outlines the character without fully filling her in.  In both her somewhat deliberate acting and emotionally circumscribed singing, she left some of the Duchess’ potential untapped. The high-ceilinged acoustics didn’t help; her voice sounded small and undercharged on various occasions. Bohn saved the best for last, in a tragic Dido-at-the-pyre scene that seemed to open her up. “I am here to be beautiful,” she sings, in an aching, long line over wilting short phrases in the orchestra. A strain of race-based paranoia, in her final spasms, feels all too apt in the current political climate.

Adams, who sang on Sunday with an announced minor illness, nonetheless came across as a firmly, slightly mad Duke, as well as a randy, bewigged judge who delivers the punishing divorce decree against the Duchess. Only at the very bottom did Adams’ voice lose weight and presence.  Like everyone onstage, all of whom who bare some flesh, his lean physique is an asset. He and the others are all very plausible as the tireless sexual athletes they’re often playing.

Powder does pose some traps, not all of which the West Edge production avoids. The borderline brittle satire and sexual japes take on a redundant cartoonish quality at times. Hensher’s wordy libretto turns class-conscious and dogmatic: “We’re not like them,” sniff several smug observers of the Duke and Duchess. The blurry acoustics play havoc with the English-language libretto; the supertitles are welcome and essential.

For all its hijinks, humor, and self-conscious relishing of scandal, Powder Her Face is anything but a superficial work. That enormous bed takes on a menacing, voracious air, a silk-sheeted chasm that swallows up a Duchess who dares to look for pleasure and relief inside.