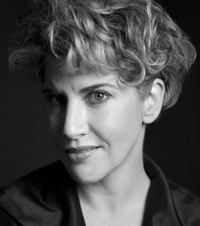 Based on the true story of a Venetian-born woman who married royalty at age 14 and ruled the island of Cyprus from 1474-89, Donizetti’s 1844 opera Caterina Cornaro is an act of decisive historical reimagination. The composer and librettist Giacomo Sacchèro grafted a melodramatic love triangle onto the story, gave the heroine a made-up noble suitor, and killed off a king in battle who actually died of an illness. In a final twist, two different endings now finish off the opera. Donizetti shaped and reshaped the facts to his dramatic and musical purposes.

Presented in a lightly staged concert version by West Edge Opera at the Northbrae Community Church in Berkeley, Caterina Cornaro proved to be, especially in the gripping final acts, an unjustly neglected lyric tragedy from the composer’s late period. The piece premiered a year after Don Pasquale. It’s a shame there was only one performance. This is a rarity that merits a more sustained rediscovery.

Soprano Heidi Moss, in the title role, was the fine and shining center of this West Edge venture, the second of three operas in the company’s "Opera Medium-Rare" 2014 bill. In her arias, ensembles and recitative, Moss spun out a sweet, sturdy, and shapely performance. She was tender early on then grew in stature, her voice turning darkly luminous as she suffered the loss of both men in her life while taking on the reins of political power and responsibility. The fluid runs and bel canto flourishes felt essential to who she was, the musical sheen of her character’s radiant strength.Under Jonathan Khuner’s hard-working musical direction the concert had a forward-driving momentum ... that set off the musical assets to advantage.

In an early scene with her French fiancé Gerardo, sung over a lightly plucked ground figure, Moss joined tenor Michael Desnoyers in a beguiling love duet of parallel and intertwining vocal lines. Desnoyers, whose voice opened up gorgeously as the afternoon progressed, was a worthy partner for Moss. When Caterina, promised to the King of Cyprus for political reasons, is forced to break with Gerardo, the lovers were wrenching in this emotionally labile scene. Moss, who rose above the theatrical limitations of singing from a score on a music stand, made the small gesture of turning her back slightly on Desnoyers register with a potent ambiguity. Her rejection of him, we understood, was too painful for her to show him face-to-face. 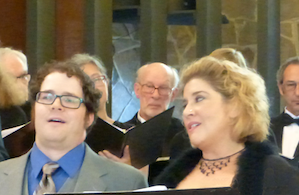 Under Jonathan Khuner’s hard-working musical direction — he conducted, led a small instrumental band of four from the piano and even pitched in to work on a balky supertitle projector — the concert had a forward-driving momentum. That set off the musical assets to advantage but couldn’t conceal some weaknesses.

Bass-baritone Jason Sarten made a striking impression as Caterina’s father, his steely voice and demeanor emblematic of paternal will. Bass Branislav Radakovic progressed from official grandeur to moving self-sacrifice as the Cypriot king Lusginano, his voice warm and burnished. The simple step of raising his music stand would have helped considerably; Radakovic reoeatedly buried his voice by looking down. John Minagro deployed a handsome baritone as the Venetian tough-guy Mocenigo, but there was little fire or poison in his delivery. The minor roles were filled with varying degrees of competence.

The chorus, shuffling in and out of the church choir pews, sounded patchy and under-rehearsed. A gondoliers’ chorus chugged along uncertainly, dotted rhythms in a court dance stalled, and the voices consistently failed to blend. By contrast the band — Sara Usher on violin, Karen Wells on clarinet, and the lyrical Nancy Bien Souza on cello — did vigorous and subtle work throughout.

The historical record, as this opera like many others demonstrates, is endlessly malleable material.

After intermission, Caterina Cornaro took off. Donizetti’s artful use of orchestral outbursts and sudden silences lit up a scene with the heroine, Gerardo and Lusignano. What might have played as thinly disguised exposition came off with real immediacy. Moss heaved out a single exclamation — “Heavens!” — with focused intensity. Desnoyers made his selfless withdrawal from Caterina’s life urgent and moving. Their duet that followed was the high point of the afternoon, a bittersweet joint acknowledgment that love doesn’t conquer all.

The duet fueled a larger ensemble scene that drove the action forward in a classic Donizettian build. Desnoyers was especially fine here, in a number that fused martial resolve to heart-breaking self-effacement. Everything flowed in a liquid, stirring stream of feeling. Moss brought things to a transfixing close, with a resolute and heroic vow to take on her duties as queen after her husband’s death. Her voice had new a fiber and tensile determination, her tone steady and the phrases tightly wrought.

And then there was bonus coverage, with Khuner leading the way through Donizetti’s alternate ending, which substantially changes the action and ramps up the melodrama. The historical record, as this opera like many others demonstrates, is endlessly malleable material.