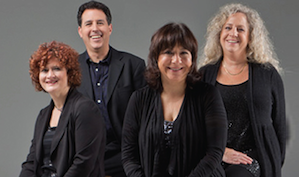 What would Charles Ives, the pioneering American composer for whom the Ives Quartet was named, have made of his namesake ensemble’s concert at St. Mark’s Church in Palo Alto on Friday? The crusty eccentric might have had some of his famously salty words for the repertoire. Ives detested music that he considered pretty or soft (his phrasing was ruder than that), and, despite his own musical wit, he would have despaired that, a century after his time, composers were still writing music that a performer could introduce to the audience as “fun.”

Friday’s “fun” composer was Julian Waterfall Pollack. He’s a Berkeley-raised 25-year-old pianist specializing in smooth jazz, who also has serious classical training. The Ives Quartet’s cellist, Stephen Harrison, and second violinist, Susan Freier, met him at a music festival and decided to ask him to write a string quartet for them, to see what they’d get.

What they got was a three-movement work that might have torn Charles Ives. He would surely have liked its American vernacular vocabulary, less jazzy in style than bluegrass. Though the rhythms are complex, sometimes even with emphases on the half-beats, they’re closer to unrelenting than to free, and the solo melodies work within the rhythms, rather than rambling outside them. Ives would also have liked the starbursts of dissonance which pop up throughout the piece, and a few passages of bent notes here and there — by far the most jazz-like aspect of the music.

Ives would also have liked the starbursts of dissonance which pop up throughout the piece, and a few passages of bent notes here and there — by far the most jazz-like aspect of the music.

It resembles Ives’ own Second Symphony, a potpourri of folk-song quotations (Pollack doesn’t quote; he does, though, write melodies in a folkish idiom) and harmonic surprises to goose the audience. Ives might not have been as happy with the generally diatonic, relaxed harmonies that dominated the work when it wasn’t being spicy, or with the echoes of more populist music that wasn’t around yet in Ives’s heyday: a bit of mid-period Copland in the chordal-based harmonies of the slow movement, and a considerable amount of Philip Glass in the rhythms switching from instrument to instrument and in the sudden juxtapositions of loud and soft.

Pollack is not a minimalist composer as the term is usually meant. He might be called post-minimalist, in that he’s incorporated minimalist tools into his musical vocabulary, as John Adams and others have. His music is not as abstract or cerebral as that comparison might suggest. According to Harrison, who introduced the piece, Pollack set out to write a work that would make his professors proud of his accomplishment; instead, though, it came out like this.

Whether it would have pleased Charles Ives or not, it was certainly intellectual and complex enough to suit me, and both enjoyable and satisfying to listen to.

Ives would certainly not have been happy with the next piece on the program, Tchakovsky’s String Quartet No. 3 in E-flat Minor, Op. 30. Tchaikovsky was one of those “conventional” composers whose work Ives derided in rather unfortunate terms. He still remains an audience favorite, though this one work is little heard; strangely, because it has good things in it. Tchaikovsky’s string quartets are like his piano concertos: He wrote three of each, but in both cases only the first one is commonly heard.

The Third Quartet’s heart lies in the long slow introduction to the first movement, home to a strong melody, fit to stand with Tchaikovsky’s finest. It started in Bettina Mussumeli’s first violin and was then passed down to the cello. It made a welcome return at the end of the movement. The slow movement is focused on a light glassy chord sequence with a touch of dissonance, echoing the opening theme of the First Quartet. The faster movements aren’t top-drawer Tchaikovsky, and are probably responsible for the work’s lesser fame.

In the separating sound of St. Mark’s, each instrument seemed to carve its own lonely path without much in the way of support or interaction from the others. This led to a slightly chaotic climax in the main body of the first movement, with separated and unison passages alternating.

The match between Mussumeli’s violin and Jodi Levitz’s viola in a solo in the Intermezzo fourth movement was particularly fine.

Pianist Miles Graber joined the Ives Quartet for the final work, Shostakovich’s Piano Quintet in G Minor, Op. 57. This rather quizzical masterwork, written in the calamitous year of 1940, received a sweetly desolate performance, calm and abstractly peaceful, close to devoid of the composer’s frantic side. Under the influence of Graber’s hard and heavy pianism, the music closed into a togetherness denied to the Tchaikovsky. Intricate solos from all the players held together in the second movement Fugue. The match between Mussumeli’s violin and Jodi Levitz’s viola in a solo in the Intermezzo fourth movement was particularly fine.

Though Charles Ives might have dismissed Shostakovich — as many modernists did at the time — he’s a crafty composer who sneaks up on the listener. All of the works on this program, though sharply differing in approach, showed their value. The program will be repeated at the Old First Concerts in San Francisco on Sunday afternoon.