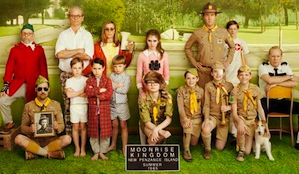 The CD bearing the movie soundtrack for Moonrise Kingdom (ABKCO Records) popped through my mail slot about a month ago. Although it didn’t seem like my usual SFCV assignment (if there is such a thing), it seemed fitted to my fancy.

I was already curious about the film. I'd read a bit in The New York Times about the setting of an early adolescent love affair in the ’60s on an island off the coast of New England. I grew up in the ’50s and ’60s on an island in Maine, where I at least imagined plenty of love affairs. The cast of the film featured some of my favorite actors: Frances McDormand, Tilda Swinton, Edward Norton, Bill Murray, Bruce Willis, Bob Balaban, and Harvey Keitel, among others.

But The Times hadn’t prepared me for the reward of finding the soundtrack packed with pieces by one of my favorite 20th-century composers, Benjamin Britten, several selected from his one-act opera based on a “miracle play,” Noye’s Fludde (Noah’s Flood), of which I’ve seen three live productions. What, I wondered, was Britten doing in a film, alongside songs by another of my musical heroes from a different genre, country legend Hank Williams, the “Volière” from Saint-Saëns’ Carnival of the Animals, a Schubert lied, and a perky pop chanson by Françoise Hardy?

It was readily apparent that much of this sourced material had a fanciful quality matching the image on the album’s cover of the film’s pubescent protagonists, Sam and Suzy, posed together in an Edenic outdoor environment. The original music, composed by Alexandre Desplat, who’d also underscored the culminating films in the Harry Potter franchise, further evoked this quality. Here was a soundtrack rewarding enough to stand on its own, yet it was high time to take my own 13-year-old son Nicholas in hand and head to a downtown San Francisco theater, to see how the pieces of the entire creative project fit together.

Oh, there had been one clue in the album’s liner notes to musical director Randall Poster’s choice of tracks: Wes Anderson, who directed the film, had himself appeared as an Otter in a production of Noye’s Fludde, when he was a kid in Houston in 1979. In his Moonrise Kingdom, a flashback has preteen Sam (played by an earnest and unaffected Jared Gilman), outfitted as a “Khaki Scout,” encountering preteen Suzy (the equally intense and charming Kara Hayward) in a church dressing room on the fictional New Penzance Island. She’s making herself up to appear as Raven in the local production of Noye’s Fludde, and he’s instantly smitten.

What, I wondered, was Britten doing in a film …?

They later make plans for the following summer, to escape both his plight, as an unappreciated orphan in a foster home, and hers as a troubled eldest child of parents (Murray and McDormand) whose marriage is on the rocks (Mom is carrying on an affair with the local sheriff, played by Willis).

The director being Anderson, there are plenty of unpredictable incidents that strain against the conventions of reality, propriety, and filmmaking. A dog gets accidentally offed. A boy gets struck by lightning, and emerges unhurt. A scout camp gets swept away in a deluge. Sam and Suzy, having taken to the woods with a tent, a few scouting supplies, and her portable record player, end up dancing in their underwear on the beach, to the perky Hardy love song, and then fumbling through a make-out session. (Nicholas whispered to me, “You sure know how to pick ’em, Dad.”)

Anderson characteristically moves through all this in a spirit of manic but ultimately empathetic and entertaining comedy, in which he’s supported by his and Poster’s choice of music.

The sweet air of innocence in the music also infuses the movie, despite its wacky story line and risqué taunting of taboos.

Britten’s Young People’s Guide to the Orchestra amuses and informs Suzy’s younger siblings, both early and late in the film. The same composer’s Playful Pizzicato, his Songs From Friday Afternoons, and the faeries’ lullaby from A Midsummer Night’s Dream illuminate other scenes, while Desplat’s own giddily kinetic score accompanies the young sweethearts’ trek and their pursuit by Scoutmaster Ward (Norton) and Sam’s fellow scouts, urged on by Suzy’s folks, who are both outraged and fearful of an imminent hurricane. The Sheriff tunes in Hank Williams to stave off his concern for the kids and for his own lovesick predicament.

The sweet air of innocence in the music also infuses the movie, despite its wacky story line and risqué taunting of taboos. And there are enough tantalizing surprises to bear your repeated listenings and viewings. There’s a happy ending, BTW. So take the kids and go see Moonrise Kingdom in theaters while you still can. Then buy the soundtrack.