Early Sunday morning, a visitor to Atherton's Menlo School might have seen a smallish crowd of eager-looking people congregating around the steps of Stent Family Hall. A number of these folks might further be seen to be carrying copies of a small, bright-red, hardbound volume. The hymnal of an esoteric sect? The Sayings of Chairman Mao? No, silly, the Boosey & Hawkes score of the complete Bartók string quartets.
[email protected] seldom does anything in a small way, but packing the entire Bartók quartet cycle into a little over four hours on a Sunday may strike even some of the festival's admirers as overkill. Count me among the Little-Red-Book-bearing faithful, though. I'm not nuts about marathons like this, as a rule; I don't think it's a good idea for works as fine as these to be thought of first and foremost as “part of a set.” But if you're going to take this approach to anything, the Bartók quartets — spanning almost the entirety of the composer's career, but taking up altogether about two and a half hours — are perhaps the best possible subject. And the players of the Borromeo Quartet are, quite possibly, the best imaginable guides. 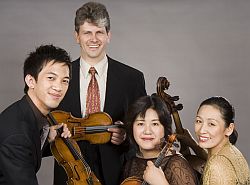 It's been six years since I last heard the Borromeo Quartet, and in that time they've acquired a new second violinist. But the ensemble I remember is alive, well, and as distinctively excellent as it was then. The Borromeo sound is ordinarily focused, dense, concentrated. But you know that is a choice rather than a limitation when you hear them open up: All of them command a wonderfully free, open tone when they want it.

And the character that impressed me on first hearing the ensemble is still there. There's no evident “leader” in this ensemble, no obviously dominant personality, and yet they're clearly not operating under the same stultifying “projection is everything” imperative as are most quartets of whom that could be said. The scale isn't small, by any means, but neither is everything pitched automatically to reach the back of a major concert hall. It's all tight, intimate, frighteningly single-minded interaction, rising sometimes to alarming levels of energy, but never seeming to dote on the audience.

There was, of course, no need for them to, since in a small hall like the Spieker Ballroom every musical gesture registers. And every physical one, too. I wrote recently of another [email protected] performance that the players seemed to move as one. The Borromeos moved more often in the way good quartets do when deeply immersed in Bartók: two against two or (more rarely) one against three, visibly tugging crosswise against one another like the warp and woof of the music's fabric.

They pull on equal terms, these four, and there aren't all that many quartets of which that could truthfully be said. This isn't an ensemble that emphasizes the individual timbres of the parts. Indeed, one of the more amazing things about the Borromeo inner players is their ability to match timbres with any of their colleagues at the drop of a hat. It is uncanny to hear second violinist Kristopher Tong, the newest member, sounding like a violinist or a violist, depending on his duo partner of the instant. It's still more so to hear violist Mai Motobuchi — whose “own” sound, as we had ample occasion to hear, is rich, woody, and full of air — matching Tong's violin one instant, Yeesun Kim's muscular cello the next.
Bridging Three Decades
The six Bartók quartets span 30 years, and hearing them individually tends to accentuate the differences that time and technique made in their composition. For me, the biggest surprise in the Borromeos' whirlwind tour was its continuity. The big gap was always between the Second Quartet and the Third a decade after — the one expansive and bristling with ideas, the other tight, forbidding, and (despite being the shortest of the six) frustratingly slippery in the grasp. In the Borromeos' hands the distance between the two seemed like a slight change in vantage point, no more.

I don't think I've heard a performance of the Third that did what this one did. It was clear, sometimes brutally so, but seldom abstract. First violinist Nicholas Kitchen, introducing this piece and its successor, stressed the two themes of Bartók's folk-music researches and of his increasing intellectualization of the musical resources he found there. In the Borromeo performance, the intricate intervallic bones of the music were there to be admired — the quartet often pared its sound down to its densest core — but the folk-derivation of the material was clearer than it usually is. Even at its most closely argued, this Third danced, and the piece made sense to me in a way that it hasn't before.

That approach didn't work the same magic for me in the Fourth. I thought the outer movements were a shade lightweight, and the special effects underplayed. (The Borromeos don't go whole hog on glissandi the way some quartets do, for example, preferring to emphasize the starting and ending notes rather than sliding uniformly the whole time.) The two Scherzos were predictably brilliant, and the central slow movement grew more compelling the further you got into it, so that what at first seemed puzzling reticence on cellist Kim's part grew in retrospect. But there seemed something in the forthright Fourth that slightly eluded the Borromeos.

No matter. The Fourth is, by now, the “easy” (heh!) one of the six — the piece that every young quartet learns and sticks on its repertoire list in earnest of commitment to the recognized 20th-century classics. Performances of the other five the likes of the Borromeos' are a rarer commodity.
Superhuman Concentration
Again and again throughout the cycle, but especially in the First Quartet, the most remarkable thing was the intensity with which the players sustained their lines. Everything had purpose and direction; no gap, however small or partial, was accidental. Over the half-hour-plus span of the First, that concentration approached the miraculous. (So, too, did the dynamic control. The finale's many ppp passages were really on the border of audibility, but at the same time there was grit in their substance. It was that tiny but uncannily intense sound you can make with a lot of well-directed pressure and a smidgen of bow.)

The Second added to those qualities our first real taste of the Borromeos' sense of humor, which manages to be both engagingly broad and finely honed, wickedly so. Kitchen emphasized the last word of the second movement's Allegro molto capriccioso title in his preconcert remarks, and that proved to be no joke.

The first four quartets were played more or less as one concert, with a 15-minute break after the Second. After the Fourth, though, the break was more like an hour, after which audience and quartet alike appeared refreshed, ready for the final third of the set.

The Fifth Quartet turned what had seemed to me the slight liabilities of the Borromeos' Fourth — the borderline lightness of attack, the occasional flippancy of articulation — into positive virtues. The agile outer movements were a treat, the breathtakingly nimble Bulgarese Scherzo a bigger one. And the interspersed slow movements were striking, both in their strangeness and in their moments of piercing lucidity. The violins' chords toward the end of the fourth movement were a little technical miracle: not only perfectly in tune but also perfectly balanced, almost inorganically clear.

As for the Sixth, the work might have been designed to bring all the Borromeos' virtues to full flower. There was the hair-trigger unanimity of ensemble; there the knowing, yet natural humor (dry in the Marcia, practically slapstick in the Burletta); there at the last the incredible power to sustain, line against line and note against note, the final Mesto ("sad") movement.

The cycle ends — as Kitchen had remarked four hours before — as it begins, with two violins alone. On those notes we listeners wandered out again into the sunlight with our little red books, a remarkable lifetime's work accompanying us.