Viewed against the more robust concert scenes in San Francisco, the East Bay, and the Peninsula, the classical-music pickings in Marin County can seem slender. But alongside the programs of the county's indigenous ensembles (the Marin Symphony and the American Bach Soloists chief among them), plus the regular visits of musicians from the rest of the Bay Area, the county proffers established concert series that approach the other counties' larger presenters in quality, if not in scale.
Mill Valley Chamber Music, based at the city's Mt. Tamalpais United Methodist Church, seems to have a knack for attracting fine touring musicians whose paths don't otherwise intersect the Bay Area. The series' current season featured, for example, the only recent Bay Area visit by the excellent violinist Corey Cerovsek. And on Sunday the guests were the Mandelring Quartet, a youngish German ensemble that has not, so far as I know, performed in the Bay Area before. 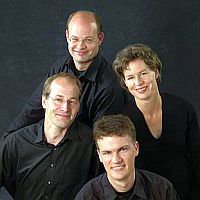 The Mandelring Quartet comprises three players surnamed Schmidt (first violinist Sebastian, second violinist Nanette, and cellist Bernhard) and violist Roland Glassl. I'd hazard a guess that the Schmidts are siblings, though their bio doesn't say so; certainly their sounds are more than usually well-matched, with Nanette's a bit brighter and edgier than Sebastian's (a distinct asset in a second violinist), and all three lean, airy, and zingily vibrated. Glassl's viola is the most striking of the four, with a lovely woody quality to its resonance.

The quartet, which has been around at least since the early 1990s, has quietly amassed an interesting discography. Along with what most quartets would call bedrock repertoire (Schubert, Brahms, Shostakovich), the ensemble has devoted a lot of its studio time to music way off the beaten track — Georges Onslow, Heinrich von Herzogenberg, Friedrich Gernsheim. And it has done so with a level of care and polish that I've come not to expect from ensembles that root around in the byways of the 19th century.
As if to the Manner Born
It's easy to forget how big a head start players have in music with a solid performing tradition, until you hear how most of them fare when they haven't got one to work from. What I've heard of the Mandelrings' 19th-century explorations impresses me most for the players' skill in intuiting and projecting the shape of an unfamiliar piece to its best advantage. They play music they must have learned from scratch just as though they had grown up with it in their ears.

Tchaikovsky's 1876 Third Quartet, Op. 30, may not be in the same rarity league as the Mandelrings' clutch of recorded premieres, but it presents much the same array of interpretive obstacles. The biggest hurdle is an opening movement on the scale, and in the design, of the first movement of a Tchaikovsky symphony — complete with the requisite churning, multiply sequenced, seemingly endless development section, but without the range of orchestral colors that can carry this sort of thing in a symphonic setting.

Against that enormous, borderline-intractable first movement and the unwieldy key (E-flat minor), you can weigh a few of the composer's most intoxicating tunes (the one opening the first movement is a stunner), a quirkily attractive Scherzo, and a funereal slow movement of searing intensity. A lot of quartets find the scales tipping the wrong way, which is why performances of this work are scarce.

But, then, few quartets have the Mandelrings' particular advantages. The most important of these are a sure sense of pacing and a most attractive collective sound. The Mandelring players like to feel the wind in their bowhair, so to speak. They favor fast bowstrokes, and full ones, but well in near the bridge; the sound is airy and vibrant, yet with a good, focused core to it.

In that notorious first-movement development, they were able to give the impression of continuous intensity over the entire span, while leaving themselves dynamic space to pace the thing. The texture was so transparent, and the timbres so pleasing, that for once the passage didn't sound like a string quartet vainly straining to suggest a hundred massed players. But neither did it sound deliberately domesticated or restrained. It was a triumph of canny voicing, something on the order of playing a Schumann symphony in such a way as to make the orchestration seem masterly.
Attractive Stylistic Touches
The Mandelrings had, too, a winning way with small-scale inflection. I liked the wry rhythmic detailing of the Scherzo, which hesitated and then rushed forward engagingly. The finale bustled in a genial way, and the bowing was crisp and light without seeming insubstantial. The austere, harmonically astringent third-movement dirge, written in memory of the violinist Ferdinand Laub, is suffused with suggestions of Orthodox liturgical music, with the second violin (chanting irregularly on one note) taking the role of celebrant. Here, paring down their vibrato, the Mandelrings achieved a fierce focus.

I have heard individual moments in the piece colored more arrestingly by other ensembles — the first movement's opening tune, perhaps, or the final moments of the slow movement. But I don't think I've heard any ensemble make a more consistent success of the work, considered as a string quartet. In the Mandelrings' hands neither the proportions nor the scoring ever seemed at fault.

If the rest of the program seemed less exceptional, it was largely because the music itself needed less advocacy. The Mandelrings' ongoing recorded Shostakovich cycle (two discs have been released) has been criticized in some quarters as too matter-of-fact and lightweight. I can imagine the Mandelring sound being something of a mismatch with several of the Shostakovich quartets (I haven't heard either disc yet), but in the brief, wistful Seventh it seemed to me perfectly apt. There was plenty of ferocity when needed — Glassl launched the third movement's fugato at a furious clip — and elsewhere the lean, transparent playing caught the piece's equivocal mood well.

Beethoven's third "Razumovsky" quartet (Op. 59/3), which closed the recital, got a "big" but — once again — not an oversize performance. Its most memorable moments were details of voicing or of timing, things like the perfectly matched violins in thirds in the first movement (Nanette Schmidt showed herself an unusually powerful second violinist throughout), or the insouciant freedom with which Sebastian Schmidt bent his cadenzalike solos.

The final fugue was taken a whisker slower than is usual these days, and the Mandelrings occasionally lengthened the last note before the theme's rests in a way that tended to slow it further. But, as happened throughout the afternoon, the gleaming sound, the shrewd shaping, and the flawless balance carried the day. If the quartet escaped the hall without an encore, it wasn't for want of prompting from a noisily enthusiastic audience.