“The 51% Majority” was the title of the Empyrean Ensemble’s program of compositions by female composers last Friday at Old First Church in San Francisco. Of the featured music, 52.4 percent (three and two-thirds of the seven pieces) was unexceptional — no surprise considering that contemporary classical music hasn’t been time-filtered enough. But the rest made the concert more than worthwhile.
Tops for me was the first performance of Ann Callaway’s The Memory Palace (2006) for clarinet, cello, and piano. According to Callaway (b. 1949), a Disney TV program on the life of Beethoven “revealed to listeners his great passion and nobility of spirit,” and inspired her, at 13, to become a composer. Among her achievements, which include a DMA from Columbia, a Guggenheim, and several residencies, the most amazing is her mailing the score of Amethyst out of the blue to the St. Louis Symphony and miraculously having it accepted for performance. (For more on what a rare event a “cold mail” such as this is, see this link.) 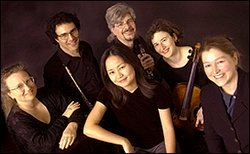 Callaway writes that once, while visiting battlements above Würtzburg, Germany, she heard church bells in town strike the hour. “I had never heard such deep, throbbing, booming bells. The evening was beautiful, the air soft, and I felt steeped in the centuries-old atmosphere of the castle.” The Memory Palace started off as “a musical artifact … a very long chorale tune, or perhaps a pavane, more suited to something I might have written in the 1600s.” Her 13-minute trio does indeed have antique qualities — among which is a sturdy tune with satisfying cadences — but more than that, it is suffused with 21st-century sensibilities. Bell sounds are mimicked by the pianist reaching over and stubbing strings inside while striking the keys; the cello soars from time to time in high registers; and both the piano, with Messiaen-like triads, and the clarinet, with interesting contrapuntal melodies, have much to contribute.

It was a shame, then, that the performance’s balance was off. The piano lid should have been lowered part way to reduce the dominance of the instrument. Conversely, from where I was sitting Peter Josheff’s clarinet was barely audible much of the time, yet it had some of the best music. The Memory Palace is a great piece that deserves more hearings under better conditions.
Woods for a Wind
Another fine work was Sofia Gubaidulina’s Sounds of the Forest (1978), for flute and piano. Gubaidulina (b. 1931), probably the most famous living Russian composer, will be honored by the San Francisco Symphony in five concerts next February. Her nine-minute duo consisted of a marchlike Allegro Rustico, followed by a trill-filled “Sounds of the Forest” proper. Both movements, while hardly avant garde, nevertheless displayed great originality. The flute melodies and flourishes in the first were, respectively, fresh and breathtaking, and the interestingly spaced chords and trills in the second fascinated.

Laurie San Martin’s (b. 1968) Circus Maximus (2000) also provoked my interest. Unlike John Corigliano’s later work of the same name, an orchestral item hailed as the loudest piece ever written, San Martin’s three-movement trio for violin, cello, and piano is relatively unspectacular, despite the “Frantic” and “Driving” titles of the outer movements. I had trouble hearing the supposedly “Waltzlike” qualities of the second movement, though there were some intriguing, mysterious-sounding piano passages at its center. The third movement, characterized by a rapid piano ostinato, was more attractive.

Less than exciting were three works by well-known composers — piano etudes by Augusta Read Thomas (b. 1964) and the Korean Unsuk Chin (b. 1961), and Several Concertos by the British composer Judith Weir (b. 1954). The etudes, Thomas’ “Twitter Machines” and Chin’s “Scalen,” while difficult, struck me as essentially no-account noodling. Weir’s so-called concertos (a trio with three short movements featuring, respectively, the cello, piano, and piccolo) were little better, flush with yet more busywork and gratuitous nonwork. (The pianist is instructed to play some notes with the elbow. Later, he raises his elbow above the notes, but does not play them.)

In terms of variety and performance, the final music in the scrambled sequence of offerings was the best. (Due to performer availabilities, the position of five of the seven works was flipped to opposite sides of the intermission.) Binge Delirium (2007), by the Taiwanese composer Yu-Hui Chang (b. 1970), was dedicated to solo percussionist Chris Froh. Chang writes in the program notes that “to merely describe him as a passionate, virtuosic, and energetic performer with machine-like precision would certainly fall short.” Well, I’ll put “very” in front of all of those adjectives, to try to suggest the wide-eyed magnetism Froh was able to project with Chang’s perfect, personality-fitting percussionfest, and leave it to readers to seek out the gentleman and his music.