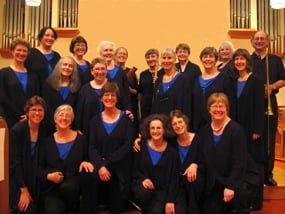 In 1976 a massive earthquake shook Guatemala City. Among the damaged buildings was the Cathedral, an 18th-century structure that housed archives dating from the days when the city was the administrative and cultural center of the Spanish colonies in the New World. Revealed among the rubble (as the story goes) was a massive, 10,000-page manuscript of polyphony by Spanish, Italian, and Latin American composers that represents a rich, forgotten legacy of Latin American music. While this story is at least partly apocryphal (since many of the works had already been documented), it explains the sudden attention paid to previously little-known and exciting Latin American music.

The Mission Project, a concert presented on Sunday at the Mission Dolores by WAVE (Women’s Antique Vocal Ensemble), directed by Cindy Beitmen, offered the Bay Area a taste of this still largely unfamiliar and promising repertory. Vocal polyphony by well-known names like Cristobal Morales, Tomás Luis de la Victoria, and Palestrina was presented alongside works by lesser-known composers such as Hernando Franco (1532–1585), Juan Gutierrez de Padilla (c. 1595–1664), and José de Torres y Martinez Bravo (1665–1738). WAVE was joined by a handful of instrumentalists who filled out the polyphony with various period instruments plus an eclectic collection of modern percussion instruments including maracas, castanets, and a djembe.

The concert was one of several by WAVE intended to raise funds for the restoration and maintenance of California mission churches. Sunday’s program, performed in the long, cool hall of Mission Dolores in San Francisco, beneath the brightly painted wooden ceiling and before the 18th-century altar, offered the rare experience of hearing early music performed in an American venue with actual historical connections to the music. Although it is unknown whether any of the repertory performed Sunday was ever sung in California mission churches, it was part of the same liturgical and musical tradition anchored in the New World by the cathedrals in Guatemala and Mexico.

One fascinating feature of this tradition highlighted in Beitmen’s programming was the musical syncretism between European, African, and indigenous American cultures. Hanacpachap cussicuinin, for example, is a processional piece printed in Peru in 1631 in the Incan language of Quechua. The piece sets a prayer to the Incan female deity Pachamama to the familiar strains of Renaissance vocal polyphony and was performed in 17th-century Peru in praise of the Virgin Mary. Mexican-born Juan Garcia de Zéspedes’ (c. 1619–1678) villancico or vernacular song Convidando esta la noche (This night invites us), which closed the program, made use of dance rhythms adapted from the music of West African slaves. WAVE’s performance of this material managed to capture the exuberance of the repertory, despite some difficulty with the unfamiliar rhythms.

Under Beitmen’s direction, WAVE’s singers produced a consistently blended, in-tune, and beautifully phrased, if tentative, sound. At its best, the instrumental playing offered lush, stylistic support to a program of primarily choral music. Particularly nice were the performance by the strings of an anonymous Kyrie, and Joyce Johnson-Hamilton’s warm, whimsical cornetto variations over a Palestrina motet. The concert effectively presented works that will likely become better known as performers continue to explore the promising repertory of colonial Latin American early music.