Who is László Klangfarben, and what is a Schick Machine? Those were the two burning questions on the minds of audience and protagonist alike during Schick Machine, a theatrical and musical work commissioned by Stanford Lively Arts and premiered Saturday evening at Stanford’s Dinkelspiel Auditorium. 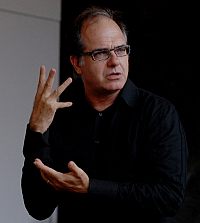 This much is certain: Schick Machine is the collaborative brainchild of percussion virtuoso Steven Schick, composer Paul Dresher, writer and director Rinde Eckert, and instrument makers Daniel Schmidt and Matt Heckert. The work began with a simple idea — of creating a theatrical piece featuring a set of newly invented musical instruments.

The resulting invented instruments are both musically and visually striking. They include metal rings the size of hula hoops; sheets of both square and disc-shaped metal; a garden of temple blocks; electric organ pipes in warm autumnal hues, arranged into a semicircular spread evocative of a turkey’s tail; and a modernized hurdy-gurdy that sounded like a cross between the ancient instrument, a modern electric guitar, and at times even a gamelan. These instruments were manipulated in the course of the performance by Schick himself, as well as by mechanical and electronic means.

Stretching Toward the Past, Through InstrumentsThe drama of Schick Machine features Schick in the solo role of László Klangfarben, a disturbed inventor. The stage, packed with strange instruments, represents his basement laboratory. A narrator explains that "Klangfarben," which  literally means “sound color” in German, is not the inventor’s real name. That name is an ordinary one, but the inventor has repressed it so deeply that he cannot remember it at all. Over the course of the drama, the audience increasingly senses that making the Schick Machine is somehow linked to the inventor's making peace with his true identity.

Though the inventor extols reason (even while he represses his ordinary past), several of the work’s major musical events are triggered by subconscious, sub-rational reminiscences upon that past. The inventor remembers three particular people: his wife, his mother, and his grandfather. As he recalls his wife in a scenario by the sea, Klangfarben performs on a sheet of metal that makes wavelike sounds, and abstract, waterlike images are projected onto a screen near him. Later, he remembers his mother, a machinist and amateur organist; the memory provokes an extended episode involving the huge metal disc, the modern hurdy-gurdy, and the refashioned turkey of an electric organ. 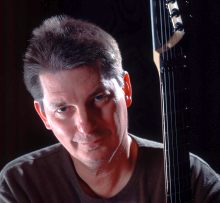 Similarly, remembering his grandfather, and certain childhood experiences on his grandfather’s farm, stimulates Klangfarben to play subdued and calm music upon still more novel instruments, including a bicycle wheel.

These significant musical events are also dramatic moments, in which the inventor seems to make the most progress on creating his machine. And the musical and dramatic levels of these moments alike seem to reconcile the past and the present. Dramatically, these episodes rely upon memory of the past for inspiring creativity in the present, just as musically they superimpose past and present musical material via live looping: Previously performed musical utterances are electronically repeated, so that they sound in tandem with whatever is currently being played live. The resultant music becomes increasingly layered and complex.

Although what precisely the Schick Machine is or does never becomes perfectly clear, its crucial feature seems to be the ability to reconcile oppositions, like the one between past and present mentioned above. Its very name suggests reconciliation between man and machine, and the sound — not language, the narrative explicitly states — that it makes reconciles large, composite forms and small, individual parts.

The music and drama of Schick Machine question where — or even whether — to place boundaries between additional sets of oppositions: reason and unreason, order and chaos, work and play. While the music incorporates both physically present and nonpresent layers, the drama blurs fictional narrative and real autobiography. (“Schick” is, after all, the name of the percussionist, who indeed did grow up in a farming family.) But one need not necessarily be confounded by this non-dichotomy of dichotomies to appreciate the work. The children in the audience clearly loved the visceral, mad-science humor and the virtuosity.

Both Klangfarben’s true identity and the status of his Schick Machine remain imperfectly resolved at the end of the performance. The question of whether you ought to see subsequent performances of Schick Machine, however, was answered resolutely indeed: Absolutely, yes.