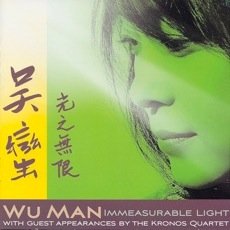 Immeasurable Light, the new CD from Chinese pipa master Wu Man, virtually wallops you over the head with its first track, Jacob Garchik’s arrangement of The Round Sun and Crescent Moon in the Sky. Part of the repertoire of the Zhang Family Band, the only shadow-puppet band of its kind surviving in the poor rural area of Shaanxi province in northern China, it is as raucous as it is joyous.

In the absence of the Zhang family, whom Wu Man plans to bring to the U.S. for a tour — see Jim Lehrer’s PBS NewsHour profile with Wu Man here — she enlists David Harrington and John Sherba of the Kronos Quartet to sing/chant/yell their hearts out. Throw in Chinese pipa (a pear-shaped wooden lute), wood block, gong, and cymbal, along with the Kronos’ Western viola and cello, and you’ve got quite the show.

Because many of Wu Man’s 37 (and counting) recordings present either collaborations with other artists or modern works for pipa, her first recordings of ancient music on the 14 tracks of Immeasurable Light are extremely valuable. Many are arrangements of ancient compositions for that instrument, preserved in manuscript scrolls found in the Mogao Buddhist Caves of Central Asia. Others date from the Tang Dynasty (C.E. 618–907).

The Round Sun and
Crescent Moon in the Sky


Five original compositions by Wu Man help round out the diverse program. Most are performed solo, with multitracked voice and percussion also supplied by Wu Man. Her longtime collaborators in the Kronos Quartet join her for two performances, including the title track.

Wu Man’s arrangement of Auspicious-Clouds Music, the first item of Banquet Music at the Tang Court in the time of the Taizong Emperor (C.E. 599–649), is almost too beautiful for words. It makes quite a contrast to her piece that precedes it, Leaves Flying in Autumn, which found its inspiration in the classical martial style of pipa works and good old rock ’n’ roll.

Namu Amida: Homage to the Buddha of Immeasurable Light is another time-traveling mélange of old and new. Wu Man first heard her grandmother sing the invocation when she was 10. Members of the Kronos Quartet join in, as Wu Man repeatedly intones Namu Amida while playing pipa, wind-bell, and Buddha box. Grandma never heard it like this.

Sounds wonderful, eh? There’s Just one problem. The multitrack recording is often painfully bright. You might expect the amplified pipa heard on the two recordings that wed the Silk Road Ensemble with the Chicago Symphony Orchestra to be metallic, but it sounds mellow, surprisingly natural, and enticing compared to the acoustic assault that is Immeasurable Light. What a shame that these fine performances are only bearable at moderate volume.