Yerba Buena Center for the Arts 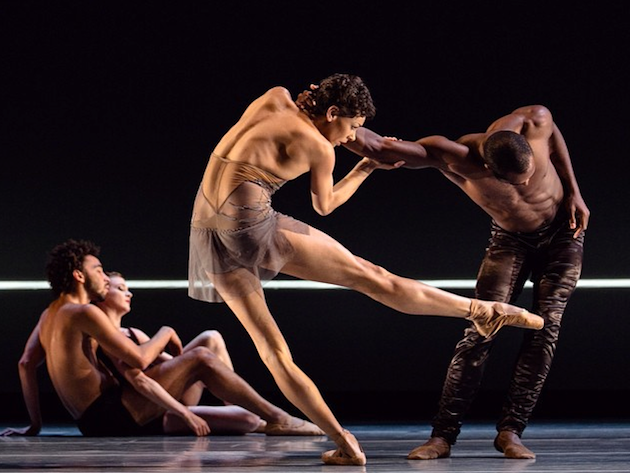 Alonzo King, not surprisingly, has kicked out all the stops with his new Shostakovich for his LINES Ballet company, which opened its home season Friday at Yerba Buena Center for the Arts’ Lam Theater. Set to recorded excerpts from four of the composer’s string quartets, it puts the women fiercely on pointe and the 10 dancers in attack mode. What are they attacking? Space, gravity, physical limitations (yes, even dancers like these have a few), and, phrase by phrase, the music. It’s probed and mined for maximum impact, as if a thought begun by one dancer is extended by another, or a couple, or maybe a small group. Their myriad entrances and exits make it seem as though there are many more than the five sections listed in the program, and all make rewarding viewing.

The dancers are unlike the dancers in other companies; they have been trained in King’s distinctive movement style. It places unique demands on the hips and backs and joints; the dancers, in this ballet as well as the next, are sleek and beautifully muscled beneath designer David Finn’s lights and Robert Rosenwasser’s form-fitting costumes. Which doesn’t mean a cookie-cutter company; Lines has the tallest female dancer in the country (or so it is said) in the stunning mover Courtney Henry, and one short, wiry dynamo in Michael Montgomery, and distinctive, beautifully trained artists of many conformations in between. Surprises unfold at a quick, rich pace. A dive gives way to a kick to a thoughtful, nearly traditional looking partnered pose gives way to bodies stilled in an X, arms and legs wide. Elbows flex and lower arms almost pop, breakdance fashion; torsos take on a lyrical tilt.

What didn’t work for this onlooker was the incandescent, lightsaber-ish thing, about five feet long, that was brought into the dance as it neared its end. It seemed misplaced and burdensome as two of the men dancers carried it, passed it, tilted it this way and that, or put it down to illuminate the stage. It didn’t do anything to illuminate the choreography or to favor the amazing performers.

The headline event was King’s 2007 Rasa, with live performances in the pit from the tabla virtuoso Zakir Hussain and Indian classical violinist Kala Ramnath. It’s a wonderful and seamless dance, whose naturalistic set by Alain Lortie and costumes by Rosenwasser look particularly in tune with each other and the movement. The two musicians, in the pit, thrilled.

Hussain’s composition has influences reaching back to the courts of Northern India in the early 1700s. Its extraordinary musical and rhythmic range includes sharp tintinnabulations from bells of brass, intriguing singing, and, from the drum as well as the violin, notes that rise and fall. The women were not on pointe, but they did some steps that looked suited to point shoes: entrechats, assembles; the men, too, were terrific in the beating jumps called sissones. Everything looked prodigiously sharp, speedy and cheerful. And what Lines does continues to be remarkable. In Rasa they spin, melt, leap, stretch, unfurl, twist, rise, and, importantly, run, feet kicking behind them in an allusion to Indian dance vocabulary that seems to arise naturally from King’s lexicon.

The sixth of Rasa’s nine movements was particularly emblematic of the commitment of the dancers, showcasing the singularly named Babatunji, Robb Beresford, Michael Montgomery, Shuaib Elhassan, Adji Cissoko, Kara Wilkes, and, again, Courtney Henry. Not for nothing does King pooh-pooh the notion that there is a thing called classical ballet and what he designs is not it. Anything, as we can see during this engagement that ends next weekend, can be classic, perhaps by the use of dance forms such as those whose postures are rooted in Indian classical dance. Combined with ballet vocabulary and dance language that’s often described as modern, the result can be contemporary. And round and round we go. What’s in a name? Maybe not much. Maybe it’s not what we say but what dancers do. Check it out, if you would, and get back to me.