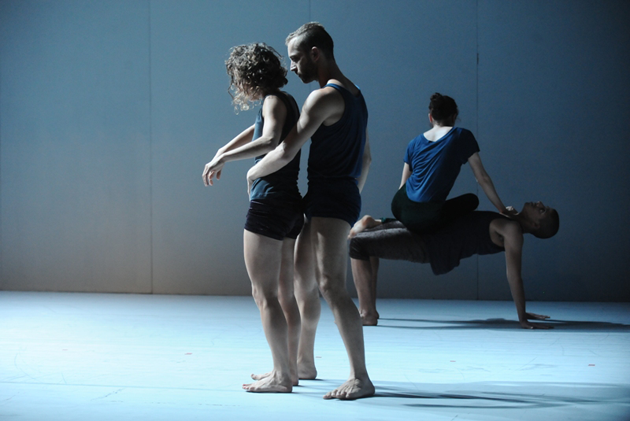 Sadeh21, the 2011 piece by Ohad Naharin for his Batsheva dance company, is a strange, wandering, and occasionally wonderful thing. Its linked vignettes, with a soundtrack designed by Maxim Waratt that includes works by Brian Eno, Johann Pachelbel, Jun Miyake, Autechre & The Hafler, and David Darling, showcase a multinational array of 18 great-looking dancers who can do anything. They’re also, to a man and woman, dancing free of emotional affect, devoid of anything unrelated to pure movement. And that must be by design.

Sadeh21 makes dancers human machines: No facial expression, unless blank is an expression; automatic movement, as when a dancer lurches circularly around the stage, both hips popped out — yes, Virginia, it can be done — bodies used by other dancers as drums, as when a woman beats on the front and back of her partner’s torso. Or maybe bodies as cymbals, with the (funny) collision of two derrieres, engineered by a third dancer.

Or perhaps your partner is a mirror — another dancer who looks back at you nose-to-nose. The two faces do not react to each other; the encounter changes the choreography of neither one.

The dancers of Sadeh21, whose choreography is also credited to the dancers of Batsheva’s 2010-2011 season, wear soft-looking pants, tops, and bathing suits designed by Ariel Cohen. Avi Yona Bueno’s simple set, a half-wall of white, will — spoiler alert — ultimately be breached by the dancers, who, at the end of the piece, will stand atop it and hurl themselves off into the backstage abyss. Why they do this is a matter for further unpacking.

Speech is briefly part of the piece, but the meaning is blocked, apparently by the dancer/speaker himself, whose tongue seems curled. Another time, when the words are clear, the words are numbers, recited by one dancer as the others move. “Five-four-one-two-two-one …” she says. Any attempt to relate the numbers with the dance onstage is futile. The dancers are moving slowly in a growing circle, and eventually, the entire company is in it. So we have a sense of blank community. What could be less communal than a circle dance without any emotion? Well, nothing.

Which brings us to the meaning, or the meaninglessness, of Sadeh21 (at one point, I caught myself anagramming “Sadeh” — Hebrew for field — to “Hades”). It’s “What the (to be polite) heck?” Stymied by a world of of war, disease, drought, neglect, inequality? You say you can’t afford tuition or to put food on the table or to have surgery? You say you just scaled one more barrier only to fall off it? Is that what’s troubling you? Hey, do we have a dance for you!

It may seem nihilistic, but not for nothing has Naharin dubbed his particular exploration of dance “Gaga.” It’s a crazy idea, that you can explore the limits of physicality without delving into emotionality. Or maybe not; deep into the show, which runs slightly longer than an hour, a group of men launch themselves into a burlesque of a romantic-sounding musical sequence, and we laugh at its floridly bad choreography. For the rest of Sadeh21, here are the Batsheva 18, solo and in well-choreographed groups, performing captivating feats of balance, elevation and extension, moving not with or against the music, but next to it. In sum, like it or not, attention must be paid.