An enthusiastic crowd packed Berkeley’s MusicSources Friday night to witness the U.S. debut of French harpsichordist Benjamin Alard. The buzz in Berkeley was no surprise, reflective of the enthusiasm Alard has engendered since winning first prize at the 2004 Bruges harpsichord competition when he was only 19 years old. This Belgian competition is the world's most prestigious contest for early-music soloists, and many of its winners have gone on to important international careers. 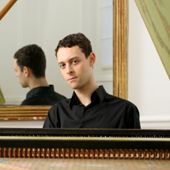 Friday’s audience was met with a mixed bag, however, both in terms of programming decisions and performance quality. Alard opted for a potpourri. Louis Couperin’s famous suite in A minor opened the program, followed by selections from François Couperin’s treatise on harpsichord playing, L’art de toucher le clavecin (The art of playing the harpsichord).

Alard followed the French pieces with some heftier works by J.S. Bach: the Prelude and Fugue in F-sharp Minor from The Well-Tempered Clavier Book II, and the grandiose Partita No. 4 in D Major. Often, this type of recital can be a pleasure for those who appreciate variety. Yet such diversity requires time for the audience to process what they’re hearing. The one-hour, intermissionless format that MusicSources encourages did not lend itself to this programming. The weighty Bach swallowed up the French pieces, and the overall atmosphere of the program was rushed, yanking the audience across periods of historical and stylistic change.
Keyed for Speed
This general feeling of haste crept into Alard’s playing, as well, particularly in the French music. The opening piece of Louis Couperin’s suite is an unmeasured prelude, a keyboard genre that 17th-century composers used to mimic improvisatory practices of the French court’s lute players. In order to represent such freedom visually, composers notated the pieces without bar lines (hence the nomenclature “unmeasured”), and generally only used whole notes.

As diffuse as the music may look on the page, the best of these preludes are nonetheless carefully structured pieces with strongly directive tonal planning. The preludes move from sonority to sonority, filling in between with florid passagework and ornamental gesturing. Listeners need a great deal of time to settle into each of the new tonal areas and to regain their bearings after the flights of fancy in the quasi-improvisations. But Alard, keen on putting across the imaginative and fantastic aspects of this art, rushed through key structural moments and reduced the prelude, unfortunately, to a two-minute ramble, impassioned but confused.

The slow dances in the suite were marred by a similar problem. Alard applied a healthy dose of what he must have considered suppleness of tempo, but which came across as simple unsteadiness and irregularity of beat. On the other hand, fast pieces fared better under Alard’s formidable technique. His sprightly rendering of the Courante elegantly emphasized the characteristic shifting metrical pulses, and he treated the famous “La Piémontaise” to a fiery, imaginative interpretation with crisp articulations and flamboyant flourishes.
Better at Bach
Overall, Alard’s Bach playing proved more successful than his interpretations of the earlier French music. He culled a lovely tone out of the instrument (a 1978 French harpsichord recently refurbished and voiced in vulture quill by Berkeley builder John Phillips) for the F-sharp Minor Prelude, and presented the incredibly dense fugue with admirable clarity and control.

Alard let go for the grand Overture of the D-Major Partita, opting for a loose relationship between the opening processional music and the closing fugal section. In the freer opening section, Alard’s creative and flexible tempos worked well, and his élan was infectious. But the Sarabande suffered from more interpretive problems. Its oddly epigrammatic opening and sparse writing seduced the harpsichordist into some rather pedestrian playing, resulting in a ponderousness that rendered the phrasing at times nearly incomprehensible.

This was a sin easily forgiven after hearing Alard’s Gigue, however. He lit out at an incredibly ambitious tempo for a work like this one, which has a number of notorious passages ripe for pitfalls. Alard breezed through these passages with almost no problems, which made evident what a competition jury might have found appealing about his playing: Alard has chops.

But chops, for all their thrills, don’t quite make a mature artist. Alard’s Bach interpretations showed real sensitivity to musical form and to the sonorous possibilities of a fine harpsichord. Yet the less dazzling French music, with its extreme demands on the interpretive savvy of the performer, proved elusive for the young player.

This reviewer is pleased to see such excitement generated by a young harpsichordist on his first tour of the United States, but will have to wait for future tours to see how Alard’s interpretive powers develop, and to assess his potential to make a lasting impression on early-music audiences.

Jonathan Rhodes Lee studied harpsichord in New York, San Francisco, and the Netherlands. He is currently enrolled in the graduate program in historical musicology at UC Berkeley.