Unusual as it may be to mention the economy and other seemingly extraneous items right at the top of a concert review, the unusual nature of said economy (and its relationship to the arts) well warrants doing so here.
First impression Saturday at the beginning of the third season of Festival del Sole in Napa: a full Lincoln Theater, the cavernous space filled probably more than at previous gala openers. There well might have been some complimentary tickets given to residents of the landlord Veterans Home, but attendance was unquestionably good-to-excellent at this pricy event 60 miles (and several gallons) north of San Francisco. 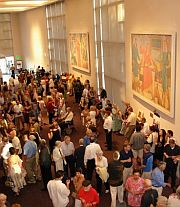 This, in spite of the general housing meltdown (the weekend before an expected unprecedented emergency injection of billions into Fannie Mae and Freddie Mac) and increasingly sharp inflation, making flying for artists and driving for listeners a problem, at least. Add the threat of hundreds of fires in the state, conceivably threatening bone-dry Napa itself, and it becomes clear that Festival organizers, marketing, sales, and audience persistence deserve to be heartily acknowledged for filling the hall. 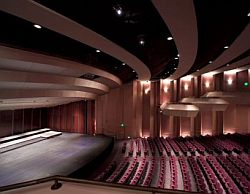 In addition to making the event possible at all, Festival Directors Barrett Wissman and Richard Walker have also earned good-karma points by engaging brilliant young artists and even local ones, although the festival originated in Italy and Singapore, through the global IMG Artists organization, which represents prominent musicians all around the world. 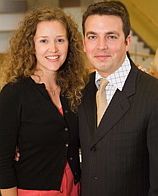 Finally, beyond all those factoids, here is the "big fact" about the concert: Most of it was truly wonderful, easily justifying the name of "festival," in the sense of fete or celebration. Pulling together the evening was Gaffigan, dancing elegantly on the podium, making eye contact and having an inner connection with every musician, focusing and representing the music, above all, and presenting a prominent — though not excessively posing — physical "face" of the music to the audience. 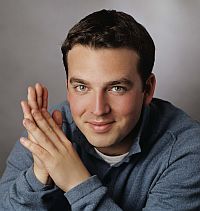 Gaffigan's program selections were both interesting and accessible: no tired warhorses, but good, valuable music, which could be partially or fully familiar to most of the audience. Through works by Bizet, Ravel, Mussorgsky, and Rachmaninov, Gaffigan was both in charge and allowing the orchestra and soloists a great deal of leeway in their partnership.

The Suite from Bizet's Arlésienne danced and enchanted, with only a touch of un-Gallic heavy-handedness here and there. I did wonder about rehearsal time, though, as it sounded like an excellent read-through by seasoned professionals. 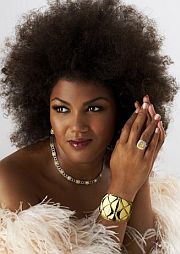 Ravel's Shéhérazade came from another place, that of effortless great performances. Unlike what was to come later, a wildly uneven performance by another artist, Brueggergosman completely owned, internalized, breathed, and radiated the music. The Barefoot Soprano (she is sticking to her now-trademarked appearance) and Gaffigan's orchestra were at one — in balance, tempo, a sense of whatever the music was saying. And so, Brueggergosman's initially quiet, almost whispering delivery of the Tristan Klingsor text in "Asie" had all the quiet longing and romanticism that any effort in the delivery inevitably ruins:
I should like to see eyes darkened with love
And pupils shining with joy
Against skins golden as oranges;
I should like to see velvet clothes
And robes with long fringes ...
Strings and, especially, woodwinds embraced and caressed the voice, realizing Ravel's full, overwhelming impact. With the understated delivery (enhanced by the singer's effortlessly authoritative French diction) throughout the song, the explosion at the end of it was all the more startling, hair-raising in its power.

The two shorter songs — The Enchanted Flute and The Indifferent One — received gorgeous performances, with Brueggergosman's voice and the orchestra's sound fusing with sensual, sparkling magnetism:
But no, you pass,
And from my doorsill I see you move away
Making me a last gracious gesture,
And your hips lightly swing
In your languid, feminine gait ...

And the Indifferent One, along with the music, just disappears, and then it's over, much too soon. Brueggergosman takes a couple of well-deserved bows, leaves ... and the orchestra is sitting on stage, waiting for the conductor to lead them off for the intermission. Whispers from the first violins to the concertmaster, then indecision. Gaffigan doesn't show, perhaps being already deep in the score of the next piece of music, so the audience witnesses the funny-awkward disorderly filing out of musicians forgotten by the maestro.

Unity restored after the intermission, Gaffigan and the orchestra lit into Mussorgsky's Khovanchina, and the young conductor once again showed his special affinity for opera, leading the long, lyrical lines toward the deep, rumbling climaxes in as "Russian" a manner as his Ravel was quintessentially French. 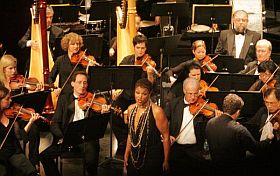 Brueggergosman with the Festival Orchestra

Yet this was only a calling card in advance of Gaffigan's leading a superb orchestral performance of the Rachmaninov Piano Concerto No. 2 in C Minor, Op. 18. All of one piece, authentic, secure, the opening Moderato and lyrical Adagio sostenuto were outstanding, while the Allegro scherzando (which only Rach-Fans can love) was merely sufficient. That was all in the orchestra, but what of the soloist?

Natasha Paremski (see here), who has gone from the S.F. Conservatory to the world stage in four years, is a "hot property," and, judging by her Napa performance on Saturday, she is overextending herself dangerously. In the middle of concert engagements and recording projects, she stepped in to take the place of André Watts, who recently sustained a minor arm injury. Paremski received a great ovation both for "coming to the rescue" and for playing virtually all the notes of this great beast of a concerto. Indeed, just getting through the Rachmaninov Second deserves acknowledgment. What might have escaped the grateful audience's attention was the missing element in her performance: most of the music. 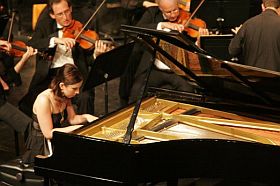 The concerto can be played in a steely manner or romantically, but whatever the artist does, she is expected to link the notes together, to bring out phrases, to provide a tempo, and — if all goes well — inner tension and a sweeping rhythm. With all her dexterity and obvious talent, Paremski performed in a tentative, unfocused way, virtually "noodling" loosely connected notes, especially in the first movement. The long lines were simply not there; at times, even brief phrases fell apart; and note followed note in a haphazard manner. No fire, no passion, no singing — just "playin' through."

With her obvious technical and musical ability, Paremski may want to take a listen to this performance in a year or so, and then dedicate herself to a performance or recording project to erase the memory of most of what happened before the Standing O in Napa. Lack of maturity, a rush to the top, and underdeveloped artistry in a fine prodigy comes as a surprise, even a shock, to spoiled audiences. On the plus side, when a young artist performs with depth and maturity — I am thinking especially of 20-year-old Yuja Wang, but there are many others — it's all the more satisfying.