The transformation in the title of Yuja Wang's latest recording does not refer to her playing. Just as in her recitals and appearances with orchestras — more than a hundred each year — she sounds powerful but never loud, brilliant without arrogance, and always, always serving the music first, eliminating all the superficial stuff that so often plagues pianists. 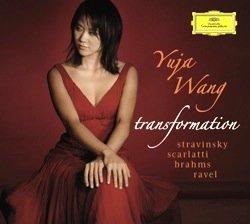 Wang goes to the heart of the matter, and still manages to remain delightfully quirky, with none of your Great Pianist poses. A mere five years ago, at age 18, she was genuinely shy, taking bows reluctantly. The contrast with hair-tossing virtuosi, their gaze cast skyward, was refreshing. The quirkiness and informality that are present on her Web site in such Tweets as “eating junk food at hooters ...” is reflected in a conversation with her about the CDs. Ask her why her new one doesn’t contain works by Ligeti, as did her first recording, Sonatas & Etudes, and she will answer: “But it has Scarlatti.”

Ligeti and Scarlatti — how does that work?

Both, she says, act to clear the palate between “more romantic, dramatic stuff.” You think about that for a while, and it begins to make sense, even if the source of my question was the hope she will continue her pursuit of bold, contemporary repertory. She will, but meanwhile there is the use of the “clean, classical” buffer of those two quite different composers.

In Sonatas & Etudes, the Ligeti Etudes are separated by works of Chopin and Scriabin.


In Transformation, Scarlatti's Sonata in E, K. 380, follows three Stravinsky pieces (Danse russe, Chez Pétrouchka, La semaine grasse), and then comes Brahms’ Variations on a Theme by Paganini, Op. 35. There is another Scarlatti then, the Sonata in F Minor, K. 466, followed by the concluding Ravel La Valse (Poème Choréographique), in the composer’s own transcription.

The “clearing the palate” structure is obvious, and is Wang’s own: She has always been responsible for programming recitals and recordings herself.

So what about “transformation”?

Wang provides many answers, to the point of her explanations becoming a bit labored. Her prose is not as clean and straightforward as her playing. “Music has transformed my life,” Wang says at one point in her discussion of the album, then there is mention in the album notes of the Buddhist idea that life consists of constant change, as well as the fact that both Stravinsky and Ravel intended their works for a large ensemble and transformed or transcribed them for solo piano.

Specifically, you’ll find “Brahms transforming his theme 27 times; Ravel transforming the waltz by stretching it to oblivion; and Stravinsky’s puppet Petrushka being temporarily transformed into a human being before finally reverting to puppethood.”

My suggestion for listening to this CD is to focus on the “Yuja Wang” part of the title, and not worry too much about “transformations.” From the musician — rather than the explainer — comes her usual certainty, flawless technique, legato worthy of the greatest singers, dynamics that are exactly right. It all may just transport you, the listener, into a place of transformation, in the dictionary definition of “qualitative change,” into musical bliss.

For, beneath the flow of music, there is an amazing technical execution, which delights rather than challenges the artist. Wang notes the music’s transformation in the Ravel from classic Viennese waltzes into a “dance of death, as in Strauss’ Salome,” observing Ravel’s chromatic coloring of the piece. The task before the pianist is to capture the colors in the orchestra version on the piano.

“It would be easy to put the pedal down and get a general blur,” says the candid artist, “but Ravel wanted the texture to be enriched and the woodwind lines to come out — so he wrote it out on three staves. The sliding melody is very hard to bring off on the piano, especially with the [recording studio] microphones so close.”

Bring it off she does, allowing the listener to hear all the colors without blurring, without the pedal held down. It’s the Yuja Wang sound.

And yet, Wang doesn’t overplay her hand as the “virtuoso,” replying to a question about Lang Lang by calling him “an iconic figure ... like Elvis or whatever. He is very, very nice; there is nothing very similar about us.” If she only wanted to dazzle, she would have chosen one of the hundreds of showy, difficult, Scarlatti one-movement sonatas.

Instead, Wang selected two of the most enchanting, melodious ones: the first a vignette of Spain, and the other, in F minor, reminding her “of the air after rain, with everything refreshed and washed. It’s like a love duet, with the left hand romantic, and the right hand pleading, but it mustn’t sound too sentimental.”

And then Wang makes a case again for clearing the palate: “These two pieces [by Scarlatti] are a little bit of sunshine between the big dark works, a relief for the ear.” I see what she means, but no “relief” was needed after the Stravinsky trio or the Brahms — just a deep breath to refocus and get ready for the next adventure.