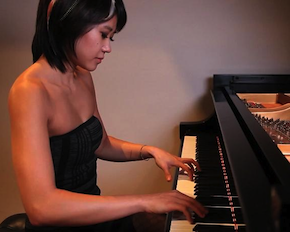 Yuja Wang is a familiar presence at Davies Symphony Hall. Through her continuing collaboration with Michael Tilson Thomas and the San Francisco Symphony, she has been dazzling audiences with impeccable technique and flair. Yet, her first, eagerly anticipated, solo recital on Oct.15 revealed a far more vulnerable side of the highly acclaimed artist.

Wang opened the recital with an explosive rendition of the Prokofiev Sonata No.3. The rapid-fire chords in the opening measures were machine gun-like, while the booming, left-hand bass was a firework announcing her arrival at the scene. The energy, with kaleidoscopic colors and textures, was incessant throughout the piece, and she leapt from section to section with full grace, yet seamlessly and effortlessly.

The Chopin Sonata No. 3 was similarly played, with unending showers of cascading notes executed perfectly, particularly in the flighty Scherzo. Her right hand seemed to just hover above the keyboard, yet delicate but sprightly notes bloomed in the air.

Yet, beneath all the dazzling pyrotechnics, there was an absence of finesse and architecture. The persistently restless, driven tempo left little time for the sound to dissipate through the hall, burying new phrases and motifs under the resonance. Phrases were often indistinct, and counterpoints failed to make their presence felt. Overly generous pedaling obscured details. These things matter less in concertos, where the pianist plays against a full orchestra. But careful attention to details while preserving the full spectrum of colors is what distinguishes a great recitalist.

Neatly incorporated into the bold brushstroke of the program was one gem by a living composer, Nikolai Kapustin. Once a somewhat underground Soviet jazz pianist/arranger, Kapustin now writes prolifically, primarily for piano. He briliantly blends progressive jazz and even jazz-rock fusion idioms into rigorous classical structures and forms.

Kapustin's Variations, Op. 41 (1984) is a raucous, 20th-century music history lesson in itself. The opening theme, which derives from a Lithuanian folk song, is shared with Stravinsky's Rite of Spring, except it is swung aggressively with sharp, ragged rhythms. Each variation incorporates a different style: Art Tatum-inspired stride-piano, fast jazz-waltz, ballad, and then two bebop variations with brief psychedelic flashes of ragtime, boogie-woogie, blues, and even a glimmer of hard rock that brings the piece to a roaring finish. It is a masterwork that is becoming part of the standard repertoire and is often heard at competitions, as it demands versatility through a wide gamut of styles and technical mastery.

Unfortunately, Wang’s performance was rife with wrong notes as well as a significant memory slip in the exposition, which forced Wang to vamp until she got back on track, even with a copy of the score sitting on the piano. Many of the jazz chords in the left hand were more Mozart than Bill Evans. The somewhat laid-back atmosphere of the lightly-swung exposition and the first variation, perhaps reminiscent of a smoky, Soviet-era, underground jazz bar was more of an Ecstasy-driven rave scene.

It was undoubtedly among the most thrilling renditions of Petrushka I have ever heard. This is where Wang stands alone.

The jazz waltz variation flew by so quickly that the rhythmic tension from off-beat accents never materialized. Even the nostalgically melancholic ballad, which creates an "aha!" moment by presenting the Rite of Spring theme unadulterated would have benefited from observing the composer's tempo marking.

Wang redeemed herself more than adequately by showing off what she does best: raging octaves and rapid runs, which were quite plentiful in Chopin’s Nocturne, Op. 48 No. 1, and in the Ballade No. 3, Op.47 that followed.

But these were mere springboards to catapult herself into a rarefied stratosphere with a jaw-dropping, exuberant rendition of Stravinsky’s formidable Petrushka. Wang even augmented the composer's own transcription with additional notes and subtle arrangements, which added more sparkle. The Russian dance was genuinely an enthralling mechanical dance of three puppets, and the psychotic laughter of the protagonist in Chez Petrushka sent shivers down my spine.

Formidable technical challenges were brushed aside, elevating Wang to master puppeteer — of the music itself and everything that was happening in the hall. It was undoubtedly among the most thrilling renditions of Petrushka I have ever heard. This is where Wang stands alone.

The pianist generously offered three encores. The first was an Art Tatum arrangement of "Tea for Two" by Vincent Youmans, in which Wang's command of the rapid, right hand runs easily equaled that of the old master. Bizet-Horowitz’ Variations on a Theme from Carmen added more fuel to the fire; then ta mournful and wistful reading of Zoltan Kocsis’ transcription of Rachmaninov’s Vocalise left the audience lamenting that the extraordinary evening had come to an end.